Trump, for his part, said at several points during his campaign for president that he would work toward peace between Israelis and Palestinians– "the deal of all deals." 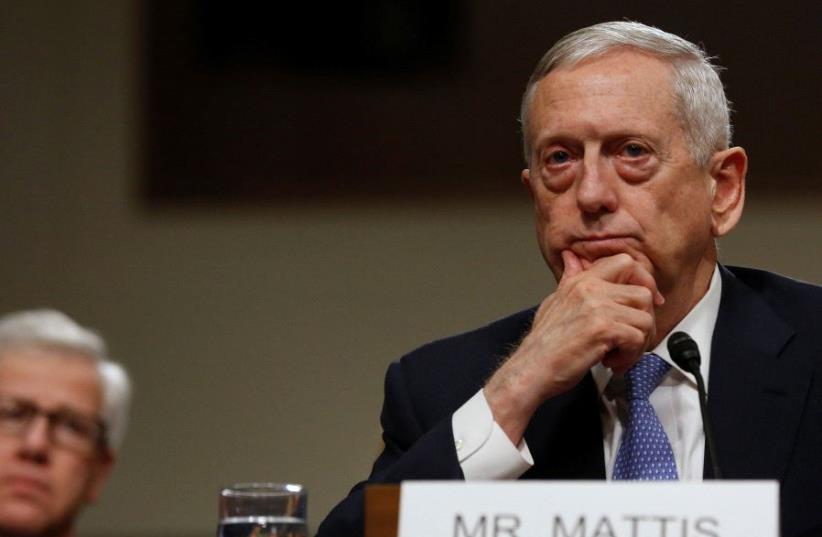 Retired U.S. Marine Corps General James Mattis testifies before a Senate Armed Services Committee hearing on his nomination to serve as defense secretary in Washington, US January 12, 2017.
(photo credit: REUTERS)
Advertisement
WASHINGTON – Donald Trump’s pick to lead the Pentagon defended US policy in support of a two-state solution and named Tel Aviv as Israel’s seat of government in testimony before the Senate on Thursday.In his confirmation hearing at the Senate Armed Services Committee, James Mattis, a retired Marine Corps general, told senators that Tel Aviv is the nation’s capital as far as he is concerned.“The capital of Israel that I go to, sir, is Tel Aviv, sir, because that’s where all their government people are,” Mattis told Sen. Lindsey Graham of South Carolina. As a military figure, Mattis added, he would “stick with the US policy” that does not recognize Jerusalem as its capital until elected officials change that policy.Graham asked Mattis whether he would support moving the US Embassy from Tel Aviv to Jerusalem. President-elect Trump has repeatedly promised to relocate the embassy shortly after entering office.
Donald Trump meets with James Mattis
“I’d defer to the nominee for secretary of state,” Mattis replied.As a leadership figure in the armed forces, Mattis’s visits to Israel may have brought him more often to Tel Aviv, where the Defense Ministry is located and the defense forces are headquartered, than to Jerusalem, where its parliament, prime minister, and all other ministries (with the exception of agriculture) are located.Asked whether he supports a two-state solution to the Israeli-Palestinian conflict, Mattis said, “I do if that brings peace to the Middle East,” and suggested that such a peace is Israel’s only path forward. “If there’s another solution, I’d be happy to hear what it is.”A two-state solution would provide greater stability for the wider Middle East, he added. “Peace in that area serves in our vital interest,” he said. “Israel is a fellow democracy, and I think Israel’s security is very, very important to the United States.”Mattis’s comments stand in contrast to the positions of other top figures in the president-elect’s team, who have already declared Jerusalem as Israel’s capital and that the US Embassy will soon move to the city.Trump’s choice for ambassador to Israel, David Friedman, has questioned the viability of a two-state solution and has long supported in word and in deed Israel’s settlement activity in the West Bank.Trump said at several points during his campaign for president that he would work toward peace between Israelis and Palestinians – “the deal of all deals.”Mattis’s area of responsibility while heading US Central Command was the Arab world, Iran and Pakistan. The Senate is expected to confirm Mattis’s nomination for defense secretary with bipartisan support.