A joint Shin Bet, IDF, and police operation conducted in May through August of this year uncovered the plans devised by some 20 Hamas operatives in the West Bank city of Nablus. 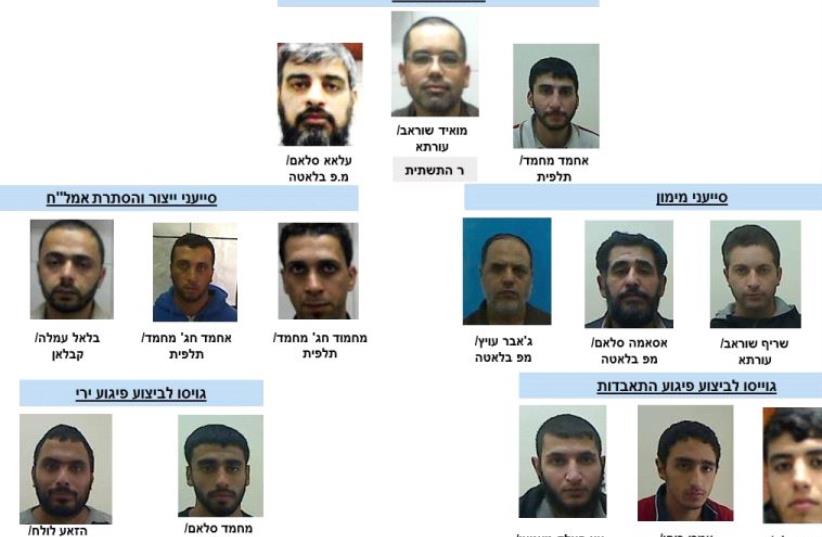 Hamas terror cell
(photo credit: SHIN BET)
Israeli security forces in recent months foiled a Hamas plot to carry out a series of suicide bombing attacks in Jerusalem and Haifa, the Shin Bet (Israel Security Agency) announced Thursday. A joint Shin Bet, IDF, and police operation conducted in May through August of this year uncovered the plans devised by some 20 Hamas operatives in the West Bank city of Nablus.
Israeli forces foil Hamas terror cell planning suicide bombings (Credit: IDF)
The Hamas ring had recruited four suicide bombers among its ranks, who were instructed to carry explosives on their bodies and conduct potentially-lethal attacks in crowded areas in Jerusalem and Haifa, according to the Shin Bet. Investigations revealed that the Palestinian terror cell had also planned to carry out shooting attacks against Israelis in the West Bank. Israeli security forces arrested the Hamas operatives, thwarting the plans for possible wide-spread death and destruction. According to the Shin Bet, most of the arrested suspects had previously been incarcerated for their involvement in past terrorist attacks and activities. Hamas cell weapons uncovered by Israeli forces (Credit: Shin Bet)"The Shin Bet investigation revealed that the matter relates to hierarchically organized Hamas infrastructure, that were it not foiled, would have led to the execution of serious attacks," said a senior Shin Bet official. During interrogations, Israeli forces uncovered terrorist infrastructure and weapons-making materials in an explosives laboratory in Nablus. Some seven kilograms of the highly-explosive substance TATP, or acetone peroxide, intended to be used in suicide bombings at bus stops in the two Israeli cities was reportedly found.Investigators also seized firearms such as M16 rifles that were said to have been obtained for the purpose of shooting attacks.

Tags suicide bombings in israel
Subscribe for our daily newsletter