Arabs and Jews want to save lives

Breaking news
(photo credit: JPOST STAFF)
Myles Horton, a wise educator and organizer once said, "If people have a position on something and you try to argue them into changing it, you''re going to strengthen that position. If you want to change people''s ideas, you shouldn''t try to convince them intellectually. What you need to do is get them into a situation where they''ll have to act on ideas, not argue about them."
Perhaps this is why United Hatzalah (Rescue), an Orthodox Jerusalem organization that trains Israeli and Palestinian volunteer paramedics to save lives together, is such a successful peace program. As Judy Siegel, a veteran Jerusalem Post reporter, recently wrote about the organization, "it is an unusual sight: Arabs wearing orange vests printed with the red Star of David team up with haredi (ultra- Orthodox) Jews wearing black kippot, their sidecurls and tzitzit (ritual fringes) blowing in the wind." This is a rare sight indeed, especially amongst the failing peace process and growing divisions within Israeli society.
United Hatzalah began in Jerusalem in 2006 and is now a national organization with responders throughout the country and from all sectors of society. It was created originally to serve the capital’s western and eastern neighborhoods. In particular, there was a need to send responders to East Jerusalem because no ambulance can get there without being accompanied by a police or military escort. Citizens from both sides wanted to take matters into their own hands. Now, UH Arabs and Jews often respond to the wounded in East Jerusalem first, getting there on their ambucycles. 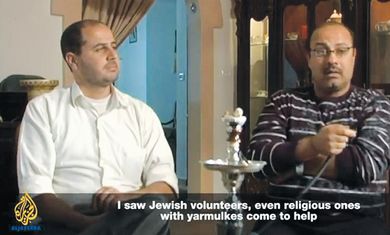 What makes me interested in this organization is why Arab and Jewish volunteers are motivated to save each others'' lives, when under normal circumstances they may have antagonistic feelings. Fadi, one of 100 Arabs currently volunteering for UH, told Siegel that "saving lives is a religious act for me. Forget all the politics and the mess. People need to live." Fadi may be on to something about the direction the peace movement needs to go.
It made me think about the Global Journal''s recent ranking of the world''s Top 100 non governmental organizations (also known as not for profit organizations). In it, almost half of the top 25 organizations were doing public health, medical relief, and humanitarian relief kind of work. In other words, they were responding to immediate health and humanitarian crises, directly saving lives. In contrast, no peace organizations ranked in the top 25: several "conflict resolution" organizations were listed in the middle of the ranking, and only in the bottom 25 organizations did peace related organizations show up.
What this shows, among other things, is that people (including donors) are motivated to save lives and are turned off by politics. The question then is how do we translate that spirit into the rest of the peace movement?
Laurarosbrow.wordpress.com