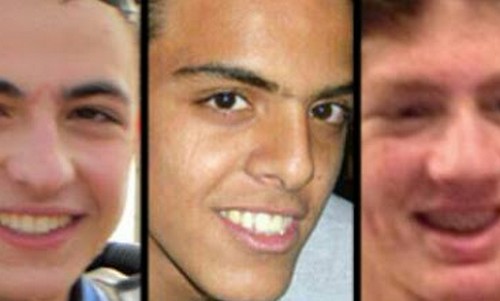 A terrorist organization kidnapped the three missing teenagers, Prime Minister Binyamin Netanyahu informed the nation on Saturday night, as he charged that Palestinian Authority President Mahmoud Abbas bore responsibility for the incident.“Our boys were kidnapped by a terrorist organization. Plain and simple, there’s no doubt about it,” Netanyahu said before convening a meeting in Tel Aviv of the security cabinet.It was the prime minister’s first public address since the three teens, two age 16 and one age 19, disappeared late Thursday night after they caught a ride at a hitchhiking post in the Gush Etzion region of the West Bank. One of them has dual Israeli-American citizenship.Netanyahu did not name the terrorist group, but he charged that the abduction was the direct result of the Fatah-Hamas unity and the new Palestinian unit government which they jointly sponsor.Since the new Palestinian government was formally sworn in earlier month, Netanyahu has issued multiple warning about its dangerous impact on terrorism in the West Bank.“To my regret, this event underscores what we have been saying – myself, the Defense Minister and the Government of Israel – for many months: The pact with Hamas has led to very harsh results, results which are the exact opposite of advancing peace between us and the Palestinians,” Netanyahu said.“All of the terrorist organizations – Hamas, Islamic Jihad and the other terrorist organizations – are committed to the destruction of Israel and they draw encouragement from this pact,” Netanyahu said.“Those in the international community who said the new Palestinian agreement with Hamas would advance peace now see the true results of this union,” Netanyahu said, adding that the accord opened the door to a Hamas takeover of Judea and Samaria.The prime minister blamed Abbas both for entering the unity pact and then for failing to thwart terror attacks such as this kidnapping.“We hold Abu Mazen [Abbas] and the Palestinian Authority responsible for all attacks against Israel that originate from their territory, whether this is Judea and Samaria or the Gaza Strip,” Netanyahu said.
The Palestinian Authority dismissed his charge. Gen. Adnan Damiri, spokesman for the PA security forces in the West Bank said that the Israeli government alone bears full responsibility for “illegally bringing settlers into the territories of the State of Palestine.”The apparent kidnapping of the three students took place in Area C of the West Bank, which is under exclusive Israeli control, Damiri said. He said that Israeli authorities have been arresting Palestinian policemen and security officers who enter this area to arrest wanted criminals.During his Saturday night address Netanyahu said such claims were “baseless.” He added, “the claim that the Palestinian Authority is not responsible because the event occurred in an area under Israeli control is baseless.” “When terrorist attacks were perpetrated, and you all remember this, in the center of the country, it was the authority that controlled the area from which the attackers originated that was responsible. This is exactly the case here. The attackers came from Palestinian Authority areas and the Authority is responsible,” Netanyahu said.He also demanded that the PA and Abbas do everything necessary to help Israeli security forces locate and return the hostages, even though Palestinian security forces have already been working closely with the IDF. Netanyahu spoke with members of the three teenagers’ families before the start of the Sabbath on Friday.“I know these are moments of anguish,” he told them, promising to do everything in his and the nation’s power to bring their sons home. Their children, he said in his public address on Saturday night, “are our children.”Netanyahu added, “I must say that these parents showed admirable restraint and strength of spirit.”“In these difficult hours the heart of the entire nation is with the teens and their families,” Netanyahu said.At the conclusion of the Sabbath, President Shimon Peres telephoned the parents of the three boys and told them: “We are one people, one family and we are together with you at this difficult time”.In thanking Peres for his call, each set of parents said they felt the affection and concern of the nation.Chief Ashkenazi Rabbi David Lau sent a message to Pope Frances and asked him to exert his influence.“You called on both nations to seek peace when you were here two weeks ago. I expect, therefore, that you will be involved now and call on the heads of the PA to work for the immediate release of the kidnapped Jewish teens,” Lau said.On Friday, US Secretary of State John Kerry spoke with Netanyahu and Abbas over the telephone. He also met with Justice Minister Tzipi Livni in London.Two of the missing teens, Gilad Sha’ar, 16, from the West Bank settlement of Talmon, and Naftali Frankel, 16, from Nof Ayalon near Latrun, are friends and study together at the Makor Chaim Yeshiva in the Kfar Eztion settlement. Frankel has dual Israeli-American citizenship.The third teen, Eyal Yifrach, 19, from Elad, near Petah Tikva, studies in the Shavei Hevron Yeshiva in Hebron. All three were on their way home when they disappeared. Khaled Abu Toameh and Jeremy Sharon contributed to this report.