Chabad center to open in South Dakota, last US state without one

“The Rebbe taught us that no place is too far and no town is too small. Every person really matters,” Rabbi Alperowitz told the Post. “Over there we will really see the power of the individual." 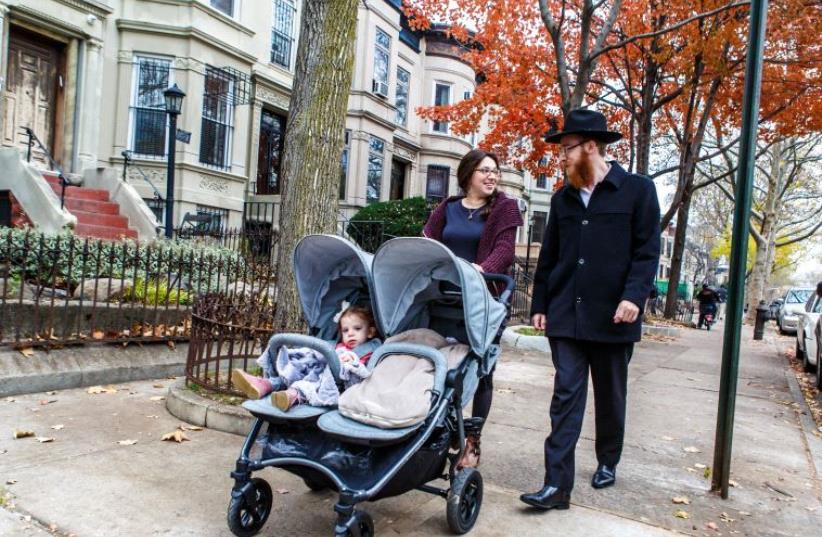 Chabad-Lubavitch Rabbi Mendel Alperowitz, right, Mussie Alperowitz, left, and their two daughters, ages 18 months and 2 months, walk in Crown Heights, Brooklyn.
(photo credit: ELIYAHU PARYPA / CHABAD.ORG)
NEW YORK - The very last US state without a Chabad-Lubavitch center, South Dakota, will finally have one next month, the movement announced on Sunday night at its annual international conference, bringing together over 4,000 Chabad emissaries from all over the world. According to a study published by Berman Jewish DataBank in cooperation with the Association for the Social Scientific Study of Jewry, in 2015 there were only 250 Jews in South Dakota, or 0.03% of the state’s population, making it the state with the smallest Jewish community in the country.But South Dakota has been on the map of the Chabad- Lubavitch movement for decades. Each summer Chabad rabbis have been visiting the local community, and during some holidays, activities with a visiting Chabad representative are also organized.This Purim, Rabbi Mendel Alperowitz and his wife, Mussie, from Brooklyn went to visit Sioux Falls, where they held events. Immediately, they were struck by the local Jews’ need to build a more established community.“People were so excited and so happy to be there, and people kept coming over to us and asked if perhaps we would consider moving there permanently,” he told The Jerusalem Post. “It’s nice to have the rabbis coming during the summer and for occasional holiday programs, but they really would like to have something more permanent.”Alperowitz, his wife and his two small daughters will be moving to Sioux Falls in the upcoming weeks to head the new center.“Just the sight of people in South Dakota seeing a rabbi and his wife walking down the street strikes up a conversation, and when people saw us, they were excited and really welcomed us to come and join them,” he said.“This is something that both my wife and I are not just committed to, we are excited about this, we are optimistic about this,” Alperowitz said.“We both know what we can do together for the wonderful people in South Dakota. For both my wife and I this is very special, and we really feel that this is a [really] important thing that we can do in service to the Jewish people.”The establishment of this Chabad center is even more significant for the movement, as it coincides with the 75th anniversary of Rabbi Menachem M. Schneerson’s arrival to the United States from Eastern Europe. He would become the seventh Lubavitcher rebbe a few years later.Shortly after his arrival, Schneerson established the Roving Rabbis program, which dispatches pairs of young rabbinical students to isolated communities around the globe.“The rebbe [Schneerson] taught us that no place is too far, and no town is too small.Every person really matters,” Rabbi Mendel Alperowitz told the Post. “Over there we will really see the power of the individual.”“In the more established places, like New York and Miami, it’s easy sometimes to unfortunately overlook someone,” he said. “But there, each individual is really a whole world.”Serving such a small Jewish community, however, does involve some challenges, including access to fresh kosher food and Jewish education.In order to eat kosher food, Alperowitz and his wife will have to have it sent from other states and will freeze it.As for education, their daughters will be enrolled in the Chabad online school for children of the movement’s emissaries across the globe.“The rebbe always taught us not to view a challenge as a challenge but rather as an opportunity,” Alperowitz said.“This is really important; it is the greatest thing we could ever be doing.”