Events included numerous talks and discussions, joint Jum’ah and Shabbat services, and a visit to Sachsenhasuen concentration camp near Berlin where interfaith prayers were held. 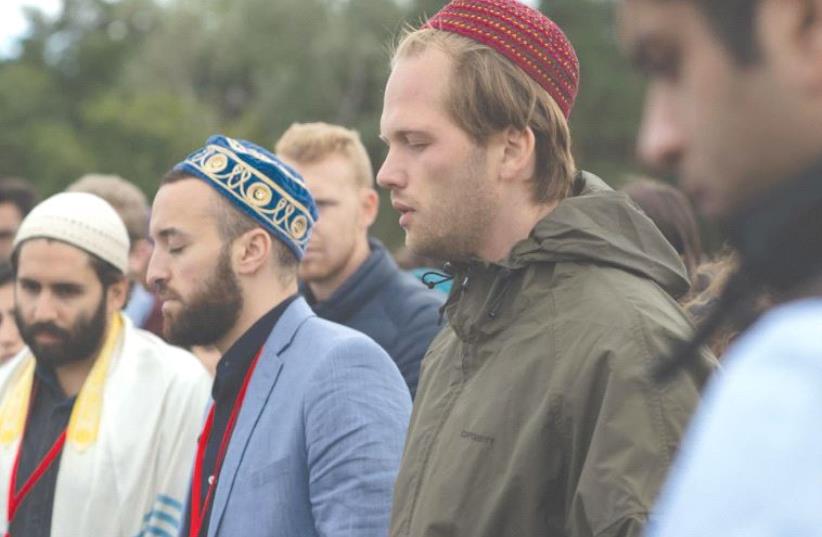 PARTICIPANTS IN THE Muslim Jewish Conference take part in interfaith prayer last week at the site of the Sachsenhasuen concentration camp in Oranienburg, Germany
(photo credit: DANIEL SHAKED)
Advertisement
Amid tension over terrorism in Europe, 150 Muslims and Jews from around the world gathered for the seventh annual Muslim Jewish Conference in Berlin.Bringing together members of both religions from 33 countries last week, including Pakistan, Sudan, France, Israel, Austria, Brazil, Tunisia, Argentina, the Palestinian territories, South Africa and Singapore, participants took part in a wide range of interfaith activities and events.Participants worked in a range of committees covering topics including arts and culture, historical narratives and identity, and conflict resolution. Professionals, activists and students in attendance also created works such as an installation in Berlin’s Mauerpark titled “Damm” (the word for blood in both Hebrew and Arabic).Events included numerous talks and discussions, joint Jum’ah and Shabbat services, and a visit to Sachsenhasuen concentration camp near Berlin where interfaith prayers were held.Taking to The Jerusalem Post, Ilja Sichrovsky, secretary-general of the Muslim Jewish Conference, argued that despite the cynicism exhibited by some with regard to the potential for change through interfaith dialogue, he remained of the belief that now more than ever it is vital. “A single person has the potential to change history and we’ve seen this in so many instances” he said. “If one person can ruin the world, then I do strongly believe a few people can have a very important role in putting it back together.”In attendance was Jack Göczü, 30, a Jewish social activist from Istanbul. Discussing what he’d gained from the conference, he said: “I thought I had all of the answers because I’m a Jew living in a Muslim country and I deal with divides every day.” He added: “Coming here and seeing the struggle of the other people left me shocked – I’m very glad that I proved to myself there is so much more on both sides.”Alina Jabbari, a 24-year-old Dutch-Kurdish Muslim student from Amsterdam, attending the conference for the second year in a row, said that for her it represents an opportunity to be in an environment like no other.“What brings me to this conference is in part how – being a Muslim in Europe – there’s very little space to feel comfortable in an area where you can be fully Muslim and still be fully human.”She added: “What I love about the space that MJC [Muslim Jewish Conference] creates is how I feel much more whole here, even if religion is not even the main topic of conversation.”