World of Mouth: The Day of the Gaucho

The column that brings you food festivals from around the world; this week Argentinians return to their roots and celebrate famous Gaucho cuisine from empanadas to dolce de leche.

By JOHANNA BAILEY
NOVEMBER 9, 2010 15:23
Empanada 311
(photo credit: Cristina, from Buenos Aires to Paris)
Advertisement
Johanna Bailey is a blogger, freelance writer and student at the Hofmann Culinary School in Barcelona, Spain.
From a distance you see him galloping across the plains. You imagine his silver belt buckle, his worn Levis and his pointy-toed boots. His horse is probably named “Lucky.” But then he comes closer and you see that rather than blue-jeans, he is wearing wide-legged bombachos and a heavy woolen poncho. Instead of a pistol he carries a facón, (a long sharp knife). This is no North American cowboy on his way back to camp for another plate of beans. This is a Gaucho - the Argentinean version of a cowboy and believe me when I tell you that though they may be not as well known in popular global culture, these guys were (and still are), a bunch of tough galletas (a Spanish “cookie” )!Not only do they know how to round up horses, but they can also tap dance! Here are some gauchos performing the traditional Argentine malambo:Gauchos can cook a lot more than beans and in fact, much of Argentina’s contemporary cuisine has its roots in traditional gaucho cookery. On November 10, Argentinians will be celebrating gaucho culture and rural life with “El Día de la Tradición” which has been held in the town of San Antonio de Areco since 1939. November 10 was the birthday of José Hernández who wrote the famous epic poem “Martín Fierro” in which the gaucho symbolizes of the Argentinean national tradition. During the festival, there are parades, dance and musical performances, and traditional skills contests. While it is sure to be a lot of fun, as usual, the big question is what will they be eating? Argentina is known for its “asado” (a type of barbecue) and much of this culinary tradition comes from the ways that the gauchos always prepared their meals over an open fire.Nevertheless, there are other key components of Argentine cuisine that celebrants will be enjoying on El Dia de la Tradicion. For one thing, there are sure to be empanadas, savory pastries filled with a variety of fillings including meat, seafood, potatoes, olives, hard-boiled eggs, cheese, raisins and spices. Just about every South American country has its own version of the empanada and in Argentina, empanadas from each region vary in terms of size, spiciness and filling. Of course, South Americans aren’t the only ones to discover that nothing beats a mound of delicious savory filling enclosed in fried or baked dough. England’s Cornish pasties, Indian samosas, Jamaican beef patties, Lebanese Kibbeh, Italian calzones, and Eastern European knishes are to name but a few other versions of this comforting portable snack. Furthermore, they can be eaten hot, warm or cold- perfect for a hungry gaucho after a long day on the pampas.
Another treat that is sure to make an appearance at El Dia de la Tradicion is "Dulce De Leche." In the US they have peanut butter, the Japanese have red azuki bean paste, the Australians have Vegemite, and the Europeans have Nutella. As for the Argentinians, this comfort food is most definitely dulce de leche, a deliciously creamy brown substance which is made by slowly heating sweetened milk until it caramelizes. As with empanadas, most South American countries have a version of dulce de leche. In Colombia it is called "Arequipe," in Mexico it is known as "Cajeta" and in several other countries it is called "Manjar" or "Manjar Blanco." The origin of dulce de leche is in hot dispute (there are versions in several European countries as well) but naturally, the Argentinians say that they invented it. One of the most appealing qualities of dulce de leche is its remarkable versatility. There are Dulce De Leche candy bars, dulce de leche cheese cakes and dulce de leche muffins. There is even a Haagen Daaz dulce de leche ice cream and dulce de leche Oreos! Of course a true gaucho probably wouldn’t be caught dead licking a dulce de leche ice cream cone. Most likely, he would just eat it straight of out the jar, using his facón of course. You don’t have to be a gaucho to enjoy these tasty empanadas. The recipe comes from the delicious food blog, “”. Empanadas:

For the meat filling: 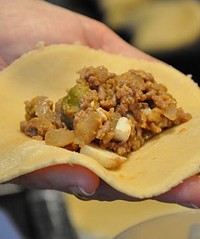 Empanada meat filling* minced meat (not too lean), 700gr (25 oz)
* onions, 2 (big), or 3 (medium), diced
* spring onions, 3, sliced
* vegetable stock, 1 cube, crushed
* olive oil, 3 tablespoons
* butter, 30gr (1 oz)
* tomato sauce, 300gr (10.5 oz)
* green pitted olives, 300gr (10.5 oz), cut in halves.
* hard-boiled eggs, 2, diced
* paprika ( mild or hot), to taste
* cumin, 1 teaspoon (remember empanadas have a Moorish origin)
* salt & pepper
In a large frying pan, sautée the onions in the oil and butter. (Using butter is important since once cold, it will make assembling the empanadas easier). Sprinkle the crushed cube of vegetable stock (this enhances flavor). Add in the meat. Cook until slightly colored (it is not recommended to cook well meat well, since then, the empanadas will be baked or fried, so a double cooking process will make meat harder!). Incorporate the tomato sauce (this is optional, but I find this makes empanadas "juicier", Argentineans love it when their empanadas drip the meat/onions/tomato juice and this is also why you don't have to skimp on the onions...) Cook for 2'. Add in all the spices, the olives and hard-boiled eggs. Refrigerate, preferably 24hs.
For the dough: 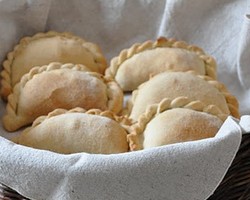 Empanada cooked
* all purpose flour, 1 kg (2.2lbs)
* pork fat (or butter), 200 gr (7 oz)
* "salmuera" (mixture of water and coarse salt)In a bowl, put the flour, adding slowly the melted fat or butter. Incorporate this using a fork. Then, put the mixture on your table, making a mound with a well in the center. Start adding the salmuera, little by little, make a ball. The mixture should not be neither too dry not too sticky. If the last happens, rub your hands with flour, and keep on kneading as you would bread dough. Continue until the dough is smooth. Form a ball, and let the dough rest (cover with a towel) for 15'. On a floured table top, flatten the dough ball, with a rolling pin, until it is 3 mm wide. Then, cut 12cm wide circles, using a pastry ring mold or a tea saucer.Nowadays, in Argentina, people rarely make the dough themselves, since it can be bought, pre cut, in the right size, in any supermarket. If you want to avoid the hassle of making the dough yourself, you can buy pastry puff sheets and cut them into smaller disks of the right dimension...the flavor won't be the same, but it is a great time-saver!Read more of Johanna's thoughts on food at: http://www.barcelonabites.com
Advertisement
Subscribe for our daily newsletter