The column that brings you food festivals from around the world; this week why are the Swiss celebrating onions and turnips instead of chocolate and cheese?

By JOHANNA BAILEY
NOVEMBER 16, 2010 16:28
Switzerland festival
(photo credit: Prior Image)
Advertisement
Johanna Bailey is a blogger, freelance writer and student at the Hofmann Culinary School in Barcelona, Spain.Ah Switzerland! It makes you think of cheese, chocolate and punctual people with cuckoo clocks on their walls. It does not, however, make you think of people hurling confetti at each other while dressed up as giant onions. But Switzerland has many sides and not everyone is aware, that every November the country is home to two of Europe’s most unique underground food festivals. And by underground, I do not mean experimental, alternative or subversive. I am talking about food that is literally grown under the ground- specifically, onions and turnips.First let’s talk onions. On Monday, November 22, hundreds of onion growers and traders will be heading to Bern with over 50 tons of onions for the annual Zibele-Märit (Onion market) which extends its roots back to the sixteenth century. The streets of the old city will be lined with some 700 stalls; most of them selling onions of just about every form imaginable. The traditional way to display the onions is in long hand-braided ropes of red and golden skinned onions. However, many like to get slightly funkier with their presentation. There are stalls selling onions hand-painted to look like babies, witches, chefs, snails and ladybugs. There are syringe-bearing nurse onions and Mickey Mouse onions.
RELATED:
World of Mouth: The Day of the Gaucho
World of Mouth: Sweet DiwaliThe market attracts thousands of tourists and as day merges into night, the celebration continues with an enormous confetti fight with more than a few of the participants dressed in onion costumes (who knew the Swiss were so wacky!) Of course, what would an onion market be without delicious onion treats? Those wandering through the stalls (knee deep in confetti no doubt), can sample dishes such as Swiss Onion Soup (similar to the French version but creamier and often made with chicken stock rather than beef stock) and Zwiebelwähe (Swiss onion tart), a quiche-like tart filled with onions, cream, gruyere cheese and bacon. 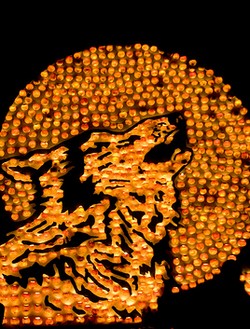 Richterswil Turnip FestivalIn the meantime, further to the east in a small village near Zurich, they celebrated a different vegetable at the Räbechilbi Richterswil, the Richterswil Turnip Festival! In this traditional event which took place on November 13, adults and children wait until nightfall and then parade through the streets carrying turnips that have been hollowed out and made into lanterns. Rather than having shapes cut out of them, the peel of the vegetable is carefully scratched away to form, often intricately carved designs which are lit up from within. In addition, the turnip lanterns are placed in windows throughout the village and there are also large floats and sculptural pieces formed from hundreds of illuminated turnip lanterns. 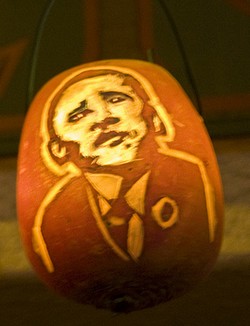 Barak Obama on turnipAs with the Onion Market, this is a time when people like to be a bit creative. I would venture to guess, for example, that neither Audrey Hepburn nor Barack Obama ever imagined that one day their likeness would be carved into a turnip.Oddly enough, the turnip festival doesn’t focus much on actual eating turnips and although you can find stalls selling turnip soup, the emphasis is definitely lies on using the vegetable as decor rather than as food. But perhaps this is not so surprising after all, as, let’s just face it, the turnip has always been somewhat of the ugly stepsister of vegetables. Round and bulbous in appearance, pale-bottomed and purple topped, the turnip is a bit of a turn-off for many people. They can be bitter if not prepared correctly and since proper turnip cookery is not exactly something you learn in high school, many people have had either negative experiences, or no experiences in eating them.However, turnips can be incredibly tasty if well prepared, especially if you take care to choose them properly.  Here are some hints for choosing and cooking turnips:-Smaller turnips tend to have a sweeter flavor. Larger turnips are often more woody.
-The tops of the turnips you buy should be crisp and green and the body should be smooth and firm.
-Some recommend that if you are boiling turnips, boil one potato with them and it will take the away the bitterness.
-Turnips can be sliced, diced or left whole. They can be boiled, roasted, baked, sautéed or even eaten raw in salads!If you’re looking for an interesting and delicious way to cook turnips, try this recipe from Silvia Gregori of the food blog Citron et Vanille.Root Vegetable Soup with Turnip Chips and Tarragon Cream
Ingredients for 6For the soup
* 2 carrots, peeled and cut in chunks  * 1 medium size potato, peeled and cut in chunks  * 1 onion, diced  * 1/2 sweet potato, peeled and cut in chunks  * 2 turnips, peeled and cut in chunks  * 1 parsnip, peeled and cut in chunks  * 1 rutabaga, peeled and cut in chunks  * 1 cup celery head (bunch of celery), peeled and cut in chunks  * vegetable broth  * 1 tbs olive oil  * salt and pepperFor the tarragon cream
* 1/2 cup heavy cream  * 2 tbs plain yogurt  * 1 tbs chopped tarragon  * 1 tsp lemon juice  * salt and pepperFor the turnip chips  * one turnip sliced into 2 mm slicesPreparation
For the soup
In a large pot, heat olive oil, then add onions and brown them. Add the rest of the vegetables, salt and pepper and stir and cook for about 5-10 minutes. Add broth, enough to cover the vegetables by 1/3 inch. Simmer until the vegetables are cooked. Add broth as needed, to always have the same quantity on top of the vegetables.
When vegetable are cooked, mix with a hand blender or mixer. Adjust salt and pepper and serve with a tsp of cream of tarragon and 2 turnip chips.For the turnip chips
Preheat oven to 250 degrees fahrenheit. Boil the sliced turnips in water for 5 minutes. Drain and pat dry, then place in the oven until they are completely dry. Sprinkle them with olive oil and salt and then return to the oven until the chips are crunchy (this should take about 2 hours). For the tarragon cream
Whip heavy cream. In a mixing container, mix yogurt, lemon juice, tarragon, salt and pepper. Carefully add whipped cream.* All photos credited to: Prior Image

Read more of Johanna's thoughts on food at: http://www.barcelonabites.com
Advertisement
Subscribe for our daily newsletter