Sitting down with the promising artist, who despite her young age is making waves with her digital works. 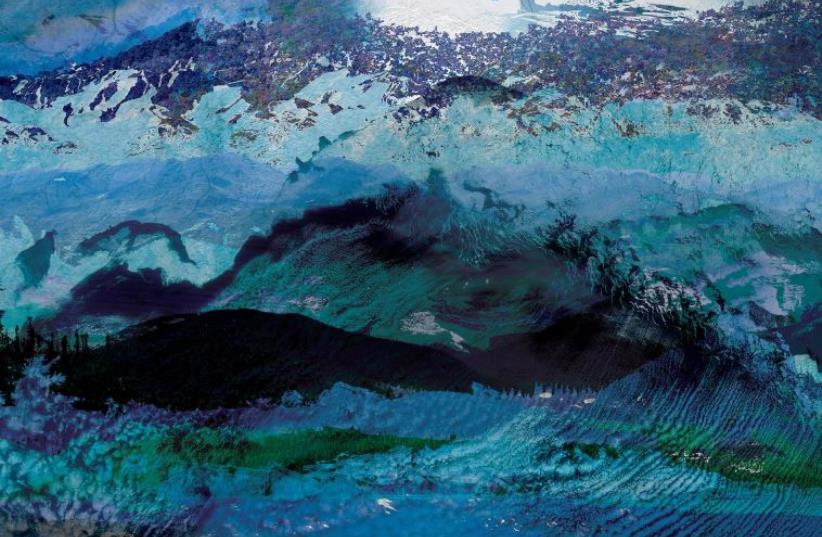 ‘Big Blue #2.’
(photo credit: COOKIE MOON)
Advertisement
Emerging artist Cookie Moon shows no signs of slowing down. Steadily working toward an art degree from Bezalel Academy, she’s had two solo shows in the last six months and exhibited her work in this year’s Shaon Horef festival.She’s only 22, but there’s a reason Cookie’s art is getting noticed. It’s 100-percent digital, yet retains a distinctly human feel. Ari Marrache-Fischel, curator of Cookie’s current show at the Khan Theatre, describes her work as “abstractly organic… innovative and unique.”I met Cookie at her home studio in Jerusalem. It doesn’t take up much space; just a computer and desk against a wall in her bedroom. There we discussed, among other topics, the creation of the world, music videos, family dynamics and art in the digital age.

What is your earliest memory of art?
Read More...
My dad is from a very small town in Canada called Saskatoon, and there is nothing to do there. Absolutely nothing. We would go for a month [from Israel] in the summers; me, my brother, and my sister. It was awful, the most boring thing in the world. I was six and my brother was 11. We were in my grandma’s basement. You can imagine. You can probably even smell it. And we made a band, our first rap song. It was really fun, the first artistic thing I did. We still both make music.What is your earliest memory of computers?I came from an Orthodox family. When I was a kid, I didn’t have a computer. We were very late to technology.But I went to a high school of the arts and was in the cinema department. We had editing and cinematography classes. Now that I’m in Bezalel [Academy of Arts and Design], I understand just how professional they were. That’s when I really got into it.

How did your family react to your decision to study art? Both of my parents are artists, so it wasn’t a problem at all. But I am the third kid, the baby. The first daughter is super successful. She finished her master’s degree in finance. The second brother didn’t finish high school, but was still very successful in music in Israel. So my mom saw that both ways work. She told me, “Listen, I had two kids already. Do whatever you want.” 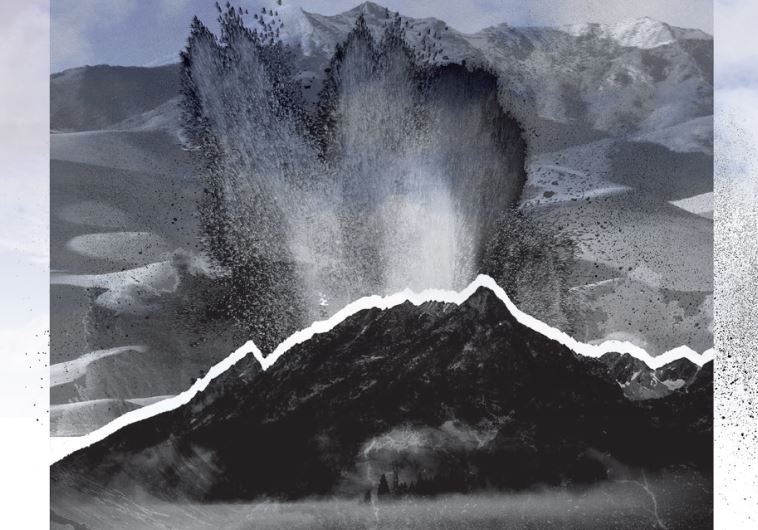 Tell me about your digital collages, specifically the series “Re-Creation of Mountains.”The whole technique is very intuitive. It’s images that I take from Google of mountains, only ones that don’t look to me like a nice photo. I try to respect people. If it looks like someone’s point of view, I’m not going to take it. If it looks like a screensaver, I’m going to take it. I only take really high quality photos.I cut the photos up very randomly with a Photoshop tool. Then I change the color, and put layers of different mountains one on top of the other.Some of the photos have the natural texture of trees. To the ones that don’t, I add texture. I have a texture bank. It’s either molded walls, cashmere or clouds. Each mountain has a layer of colors and a layer of texture. And every piece has between 20 and 80 mountains. Google doesn’t have so many mountains, so I really know them. I know what mountain is good for what.Why mountains?I knew you were going to ask me that, and I don’t have an answer. But it’s just so appealing to me. You want to be there. You want to live on the mountain.It’s so real, so wild. Throughout time, they don’t really change. I used to really hate mountains, like on hikes. You walk up for hours. It’s so tiring. And in the end, you can’t even see the mountain. For five minutes, you see the view and then go all the way back down. It’s a disappointment. I prefer looking at the mountain to being on it.What prompted you to create digital collages?I’m in the video and documentary cinema department at Bezalel. So the digital collages have nothing to do with what I’m studying. It’s what I do when I don’t want to work or edit anymore. When it’s tiring, but I don’t want to turn off and watch TV yet.Before I knew I was going to have an exhibition, I was like, “Ugh, I need to relax. What am I going to do? Make a mountain.” It’s easy because I can do it while talking to you, or while watching something else. It’s not like I have to be super concentrated.Once I’ve already done ten, I know the process. It’s not manufactured; it’s just very random.

How does your work surprise other people? How does it surprise you? What surprises other people is that it’s digital.Everybody thinks it’s painting and it feels like it. The first time I printed a piece, it came out so textured that I thought someone stood on it with a shoe. So people are surprised that it’s totally flat.I don’t know my work so well because it’s so intuitive.When we printed Big Blue #2, we were like, “Whoa, there are two eyes there.” But I didn’t put eyes. So I went back to the project and took all the layers off. It’s not like there’s anything that resembles eyes in any one of the layers. It’s just that when all the layers are together, you can see eyes. I’m also surprised when for a month, every day I make one, and they come out great, and then one day, it just doesn’t work. I’m like, “What? But I know how to do this. What’s happening?” 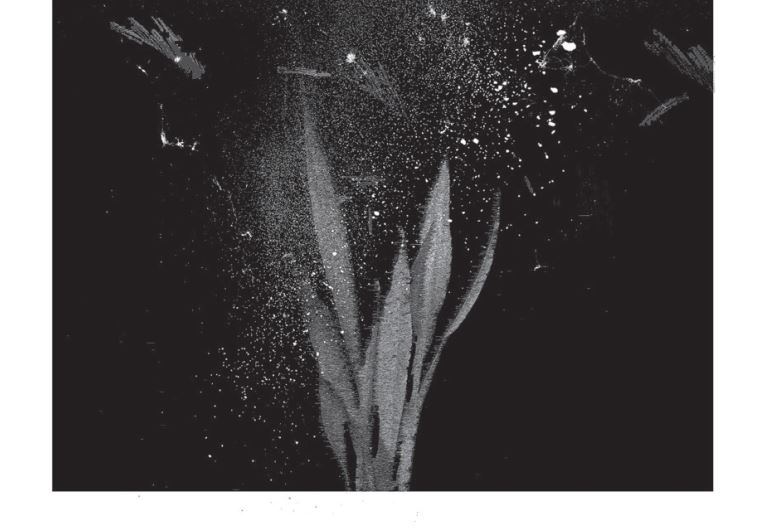 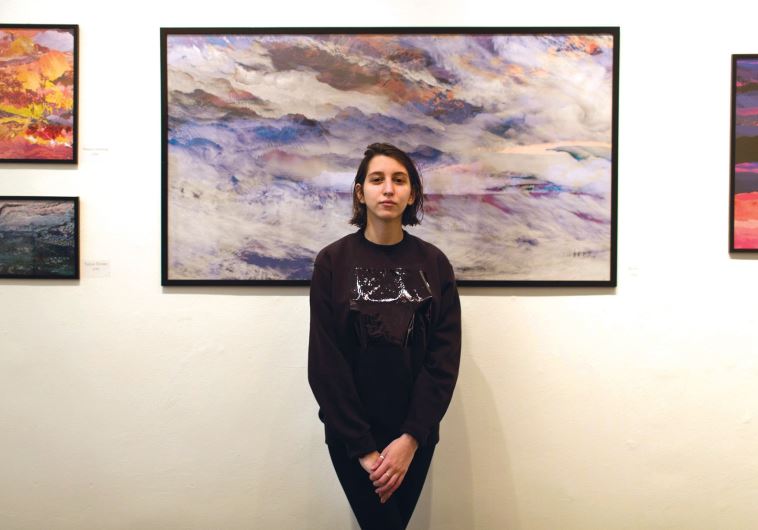 What’s the best advice you’ve received as an artist?On one hand, you should really commit to what you’re doing. You shouldn’t slack off. If you have an idea, you should spend all the money you need to make it right. Get the costumes and images right.Get the right camera. Do everything you need to do to make it as good as you can. You shouldn’t compromise.If you’re hooked on an idea and it’s important to you, then you should really go at it.On the other hand, you should let things go. Put it on YouTube. It’s out there. Don’t work on this cut or this shot when you’re not even into the subject anymore and you’ve seen it so many times that you’re blind. You’re just hooked into something that doesn’t matter. You have to make room for new stuff, and you can’t if you’re still holding on.

What do you like most about digital art, and what is its most challenging aspect? First, the process. I like my computer. Drawing, painting, sculpture, building, writing; I’m not good with my hands. So it comes more naturally to me. Also, it’s easier to fix your mistakes. It’s easier to use so many things as your source from the Internet. And it’s much more accessible because you can upload really easily. One of my newer mountains, I made into my brother’s EP design. I just added his name and it’s on Soundcloud. It’s easier in that way.And it’s harder. Because it’s much harder to get that human feel. I don’t like that people don’t have as much respect for digital art, even in these days.Not that I’m looking for money, but they think, in general, “This thing can be printed a million times.Why should I pay for this?” It’s a huge issue. Because you can reproduce it, it’s not worth anything. I understand, in a way. That’s I make a limited edition of 20. The less there is, the more it’s worth. Sign it with a pencil with my own hands.Still, I prefer digital art. I can do so much with it.Now I want to do a clothing line. And I have postcards, which is something you can only do with digital. It’s exciting and it’s much more now. I can’t resist that. Cookie Moon’s work will be exhibited at the following venues until the end of March:
• “Re-Creation of Mountains: An Excerpt” at The Khan Theater, curated by Ari Marrache-Fischel of Marrache Fine Art, solo exhibition
• “Tohu Va’Vohu” at Jerusalem’s Port restaurant, 22 Hillel Street, curated by Shahar Nof Agam of Context, group exhibition (“Dreams”)
To learn more about Cookie Moon, visit her website: www.thecookiemoon.tumblr.com
Advertisement
PREMIUM Log Out
Subscribe for our daily newsletter