Neda's fiance: Iran will be free

By JPOST.COM STAFF
MARCH 19, 2010 22:25
caspian makan 311
(photo credit: Channel 2)
Advertisement
The fiancé of Neda Agha-Soltan, who was killed during protests in Teheran following the Iranian elections last year, visited Israel as guest of Channel 2, the station reported Friday evening.Soltan’s death was caught on a video widely disseminated through the Internet and on news outlets, and she has become a symbol of the Iranian opposition.Caspian Makan was tortured by the Iranian government and escaped to Canada following Neda’s death. 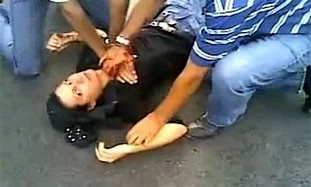 He had said his dream was to come to Israel.Now, that Makan landed here, he will have the honor of meeting President Shimon Peres.“I have come here out of the brotherhood of nations,” Makan told Channel 2.“Neda was just a voice that yearned for freedom. In the name of this cause she joined the protesters and this is why she was murdered by agents of the regime,” Makan said.“I was arrested six days after Neda’s murder, because I exposed crimes committed by the regime,” a weary-looking Makan said.In trembling voice, Makan said there was hope for change in Iran. “The Iranian people is aware of the rights its being denied. Today the Iranian people is steadfast to achieve victory and to overthrow the current regime.”Makan said he hoped for an Iran “where no man comes against his fellowman, with no more executions, no more war, no more murder.”Asked what he would tell Neda if he knew she could hear him, Makan said“I will continue along her path. Her path was the path of freedom, notjust for Iranians but for the whole world.“Love for mankind was part of [Neda’s] being,” Makan said.
Advertisement
Subscribe for our daily newsletter