May, 59 assumed office after an audience with Queen Elizabeth. 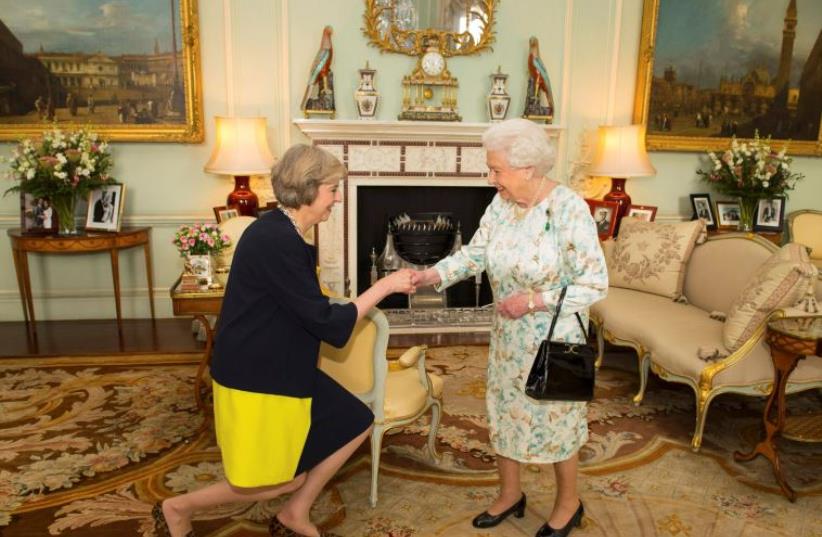 Britain's Queen Elizabeth welcomes Theresa May at the start of an audience in Buckingham Palace, where she invited her to become Prime Minister, in London July 13, 2016.
(photo credit: REUTERS)
Advertisement
LONDON - Theresa May became Britain's new prime minister on Wednesday, promising to carve out a bold new future in the world as she embarks on the monumental task of leading the country out of the European Union.May, 59 assumed office after an audience with Queen Elizabeth and drove straight to her new home of 10 Downing Street, vacated hours earlier by David Cameron."We will rise to the challenge. As we leave the European Union we will forge a bold new positive role for ourselves in the world, and we will make Britain a country that works not for a privileged few, but for every one of us," she said.
Theresa May becomes Britain"s new Prime Minister
Cameron stepped down after Britons rejected his entreaties and voted to leave the EU in a referendum last month, severely undermining European efforts to forge greater unity and creating economic uncertainty across the 28-nation bloc.May must try to limit the damage to British trade and investment as she renegotiates the country's ties with its 27 EU partners. She will also attempt to unite a divided ruling Conservative party and a fractured nation in which many, on the evidence of the vote, feel angry with the political elite and left behind by the forces of globalization.Acknowledging the struggles faced by many Britons, May declared: "The government I lead will be driven not be the interests of the privileged few, but by yours. We will do everything we can to give you more control over your lives."When we take the big calls we'll think not of the powerful but you, when we pass new laws we'll listen not to the mighty but to you, when it comes to taxes we'll prioritize not the wealthy but you."The United States congratulated May and said it was confident in her ability to steer Britain through the Brexit negotiations."Based on the public comments we've seen from the incoming prime minister, she intends to pursue a course that's consistent with the prescription that President Obama has offered," White House spokesman Josh Earnest said.An official photograph showed May curtseying to a smiling Queen Elizabeth, for whom she is the 13th prime minister in a line that started with Winston Churchill.She is also Britain's second female head of government after Margaret Thatcher.

DIVORCE TALKSEU leaders, keen to move forward after the shock of 'Brexit', want May to launch formal divorce proceedings as soon as possible to help resolve the uncertainty.But she has said the process should not be launched before the end of year, to give time for Britain to draw up its negotiating strategy.Although she favoured Britain remaining in Europe, May has repeatedly declared that "Brexit means Brexit" and that there can be no attempt to reverse the referendum outcome.The shock vote partly reflected discontent with EU rules on freedom of movement that have contributed to record-high immigration - an issue on which May, as interior minister for the past six years, is politically vulnerable.But EU leaders have made clear that free movement is a fundamental principle that goes hand-in-hand with access to the bloc's tariff-free single market, a stance that will hugely complicate May's task in hammering out new terms of trade."My advice to my successor, who is a brilliant negotiator, is that we should try to be as close to the European Union as we can be for the benefits of trade, cooperation and of security," Cameron told parliament in his last appearance before resigning.Appearing later in Downing Street with his wife Samantha and their three children, he delivered his parting remarks to the nation after six years dominated by the Europe question and the aftermath of the global financial crisis."It's not been an easy journey and of course we've not got every decision right," he said, "but I do believe that today our country is much stronger."In parliament, Cameron took the opportunity to trumpet his government's achievements in generating one of the fastest growth rates among western economies, chopping the budget deficit, creating 2.5 million jobs and legalizing gay marriage.Yet his legacy will be overshadowed by his failed referendum gamble, which he had hoped would keep Britain at the heart of a reformed EU.

'OUR ANGELA MERKEL'May is seen by her supporters as a safe pair of hands to steer the country through the disruptive Brexit process. Colleagues describe her as cautious, unflappable and intensely private."I think around the cabinet table yesterday the feeling was that we have our Angela Merkel," said Jeremy Hunt, health secretary in Cameron's team which met for the last time on Tuesday."We have an incredibly tough, shrewd, determined and principled person to lead those negotiations for Britain," Hunt told Sky News television.German Chancellor Merkel will be May's most important counterpart on the continent as the process unfolds. Both women are renowned for their firmness, pragmatism and discipline.The new British leader is expected to immediately start putting together a new cabinet, a complex political balancing act in which she will try to satisfy opposing camps in her party.She has said she plans to set up a new government department to lead the process of quitting the EU which would be headed by someone who had campaigned on the Leave side.Financial markets, which had been extremely volatile since the referendum, reacted positively to news on Monday that May would become prime minister earlier than expected.Stock markets traded within sight of their highest levels of the year as the prospect of stimulative economic policy across the developed world eased immediate concerns over the impact of the Brexit vote.Economists predicted in a Reuters poll that the Bank of England would halve its main interest rate to 0.25 percent on Thursday in a pre-emptive strike to try to ward off a recession and reassure markets.