Davutoglu says it's unacceptable that countries suspected of having nuclear weapons cause new tensions in Mideast, AFP reports.

By JPOST.COM STAFF, REUTERS
NOVEMBER 12, 2011 17:22
Turkey FM Davutoglu and Iranian counterpart 311 (R)
(photo credit: REUTERS/Umit Bektas)
Advertisement
Turkish Foreign Minister Ahmet Davutoglu on Saturday warned against a military strike on Iran and said that speculation over a possible attack risked destabilizing the region, AFP reported.Davutoglu was referring to reports published in the media in relation to a possible Israeli strike on Iran. His comments also came after an International Atomic Energy Agency (IAEA) report concluded the Islamic Republic was working to develop a nuclear-weapon design.RELATED:
Iran rejects IAEA report as politically motivated
US on IAEA report: 'We won't rule anything out, or in'Referring to Israel, the Turkish foreign minister said: “It is unacceptable that countries suspected of having nuclear weapons cause new tensions in our region," the report stated. “We do not think it is right even to talk of possible military intervention in the region,” Anatolia news agency quoted Davutoglu as saying in Ankara, according to AFP. 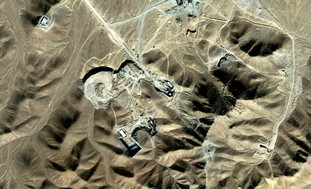 On Friday, the UN nuclear watchdog showed letters and satellite images on Friday as part of evidence pointing to military dimensions to Iran's atomic activities, diplomats said, but Tehran's envoy dismissed it as "lousy" intelligence work.Herman Nackaerts, head of nuclear inspections worldwide at the International Atomic Energy Agency, made an hour-long technical presentation of the IAEA's latest report on Iran's nuclear program at a closed-door meeting for member states.The hotly anticipated document, released last Tuesday, said Iran appeared to have worked on designing an atomic bomb and that secret research may continue. It was the most detailed IAEA report to date on the issue.

Click here for full Jpost coverage of the Iranian threatAli Asghar Soltanieh, Iran's ambassador to the IAEA, said there were no nuclear-related activities at Parchin."There is no proof that Iranian activities are towards military purposes," he told reporters after the briefing.
Advertisement
Subscribe for our daily newsletter