During Hanukka 1932, the family took a now-famous photograph of the hanukkia positioned on a window ledge, beyond which the Nazi flag could be seen 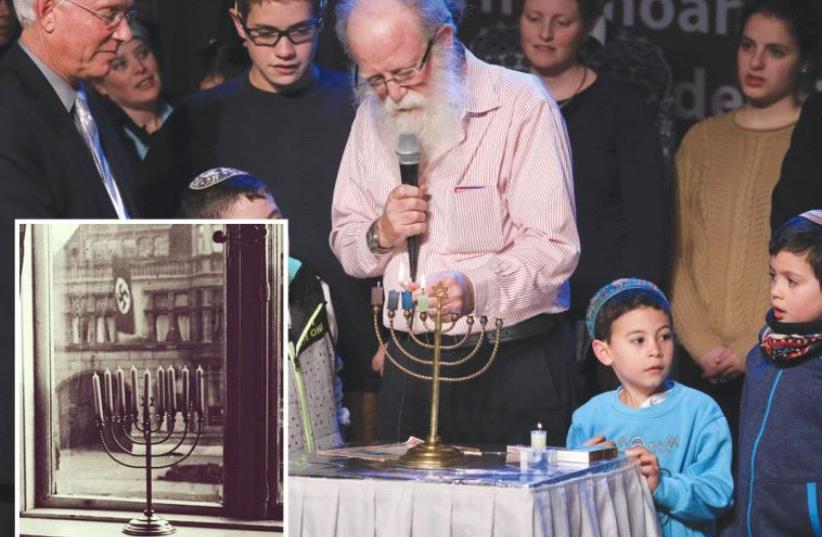 Yehuda Mansbach, grandson of Holocaust survivor Rabbi Akiva Posner, lights his grandfather’s hanukkia at Yad Vashem on Tuesday. Inset: Posner’s hanukkia sits in the window against a backdrop of 1932 pre-Nazi Germany
(photo credit: YITZHAK HARARI)
A hanukkia lit by a German rabbi in defiance of mounting antisemitism and repression in 1930s Nazi Germany was lit on Tuesday night at Yad Vashem by his grandson at a conference on preserving Jewish identity.The hanukkia belonged to Rabbi Akiva Posner, who served as the last rabbi of the Jewish community in Kiel, Germany, from 1924 to 1933.Posner published a letter of protest in a local paper against posters that appeared in the city with the warning “Entrance to Jews Forbidden,” but when he realized that anti-Jewish sentiment and actions would only get worse, he fled with his wife and children to Mandatory Palestine in 1933. Posner managed to persuade many of his community members to leave as well, and many did indeed escape to the US or Palestine before the Holocaust.During Hanukka 1932, just before the elections that brought the Nazis to power, Posner’s wife Rachel took a photograph of the family hanukkia positioned on a window ledge, beyond which the Nazi flag could be seen.On the back of the photograph, she wrote in German “Hanukka 5692, ‘Death to Judah,’ so the flag says. ‘Judah will live forever,’ so the light answers.”The hanukkia from Kiel is just one of several hanukkiot that were in use before and during the Holocaust, which will be lit during the Yad Vashem conference currently under way, titled “The Shoah and Jewish Identity: Challenges in Jewish Education.”These hannukiot are now in the Yad Vashem Artifacts Collection and have been collated in the museum’s online exhibition “Hanukkah – The Festival of Lights,” which includes images, testimonies and artifacts showing how Hanukka was observed throughout Europe before, during and immediately after the Holocaust.Another hannukia that will be lit during the conference is the Westerbork hanukkia, which was made in 1940 by Zelig Scheinowitz in the Westerbork transit camp in Holland. Scheinowitz was a German Jew who fled from Leipzig, Germany, to Holland, but was deported to Westerbork with his family. They managed to survive due to Scheinowitz’s job as a baker in the camp and were liberated in 1945 after having lived in the camp for five years.“Each menorah has a unique story, similar to those of Holocaust survivors themselves,” said Ephraim Kaye, the conference organizer and director of the Jewish World and International Seminars Department at Yad Vashem’s International School for Holocaust Studies. “Just as we use artifacts and testimonies to tell the story of the Holocaust, so, too, are these menorahs examples of how Jews put themselves at risk to maintain their Jewish identities,” he added.