“Public authorities are prohibited from any separation between men and women even if done following requests from a sector of the public with an interest in the matter,” says deputy AG. 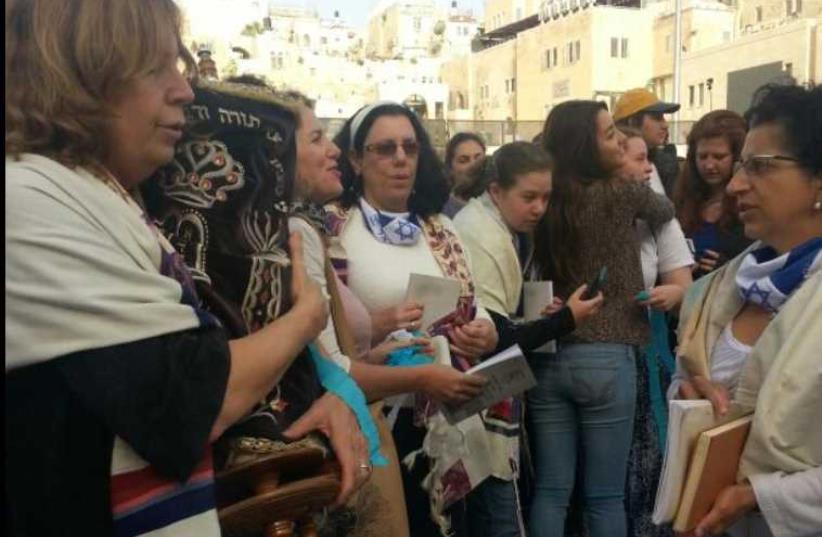 Women of the Wall carry a Torah scroll into the women's section of the Western Wall plaza
(photo credit: WOMEN OF THE WALL)
Advertisement
The Attorney General’s Office has written to the supervisor of the Western Wall and the Holy Places, Rabbi Shmuel Rabinowitz, underscoring the importance of including women in official state ceremonies, including the Hanukka candle lighting ceremonies that take place every night of the holiday.The Women of the Wall prayer rights group has been conducting a concerted campaign in recent months and years to have female public officials included in the list of dignitaries who are asked to light a large Hanukkia at the Western Wall plaza. The ceremony takes place in the men’s section of the plaza and only men are invited to participate.The letter to Rabinowitz comes after WoW wrote to the Attorney General’s Office, pointing out that a government report on the exclusion of women in the public sphere published in 2013 prohibits the exclusion of women from state ceremonies.In the response sent to Rabinowitz on Sunday, entitled “Preventing the Exclusion of Women from the State Candle- Lighting Ceremony for Hanukka”, Deputy Attorney- General Dina Zilber asked to see the list of dignitaries invited to this year’s ceremonies, and pointed out several commitments made by the state to prevent discrimination against women in the public sphere.Zilber cited the 2013 document on the exclusion of women from the public sphere, drawn up by a working group of the Justice Ministry, which asserted that separation between men and women in the public domain represents illegitimate discrimination against women due to their being women.The deputy attorney general noted that the document states specifically that “public authorities are prohibited from any separation between men and women, even if done following requests from a sector of the public with an interest in the matter.”Continued Zilber, “In light of this… we request to confirm what should be obvious, that you are working towards the integration and participation of women in the state candle- lighting ceremonies that will be staged at the Western Wall this coming Hanukka.”She added that it would be “a great help if we would be able to receive the list of those participating in the ceremonies.”WoW chairman Anat Hoffman praised the step taken by the Attorney General’s Office, and expressed hope that, given Zilber’s emphasis on the prohibition against gender separation by public institutions, Rabinowitz would find an appropriate solution.She said that the organization would be happy if as a result the state ceremony were moved from the men’s section of the Western Wall plaza to the upper section of the area behind the men and women’s sections and with female public officials participating.Hoffman also pointed out that according to Jewish law, women are obligated to light Hanukka candles, and that men can even fulfill their obligation to light by asking their wives to light the candles on their behalf.“When the president of the Supreme Court was Asher Grunis, he was invited to light the candles. Would it be acceptable for the president of the Supreme Court, Justice Miriam Naor, was not invited because she is a woman?” asked Hoffman.“Women of the Wall and all of our activists, men and women in Israel and abroad, are becoming the match that ignites this cause. Matches are lit by friction, and nothing else works in this lighting ceremony if there is no match.”In a separate matter, the Center for Women’s Justice filed a petition in the Israeli Supreme Court on behalf of four members of the Original Women of the Wall organization on Sunday, requesting that the Court declare void a directive drafted by Rabinowitz in 2010 and approved by the Ministry of Justice, which prohibits anyone from bringing a private Torah scroll into the Western Wall plaza.CWJ asked the Magistrate Court to order the supervisor of the Western Wall to award damages to the women in the amount of 150,000 NIS for denying them access to the Torah scrolls at the site that are set aside for the use of men only.Rabinowitz said in response that the solution to the issue would come with the construction of a third, pluralist section of the Western Wall, currently under discussion within the government and the non-Orthodox Jewish denominations.Original Women of the Wall, which includes founding members of WoW, broke away from WoW over a dispute as to how to continue the campaign for women’s prayer rights at the Western Wall.The petition filed with the Supreme Court asks the Court to declare the directive against bringing in private Torah scrolls void. It claims that the supervisor of the Western Wall has no authority to issue such a directive, which is not specifically authorized by the Law of the Protection for Holy Places of 1967 and which violates the basic rights of Israeli citizens to equal treatment by the state.“The directive is just one example of what happens when the State cedes its authority to theocratic bodies that do not believe in human rights or equality under the law,” said Dr. Susan Weiss, the Director of the Center for Women’s Justice.“At the Kotel, the State sacrifices the human rights of women who want to read from Torah Scrolls. But similar sacrifices happening all over Israel are justified by reference to secondary legislation and regulations like this ‘Torah directive.’”