"Gabriel’s spat with Netanyahu appears to not be about Israel but how German elites can’t bring themselves to work through their reaction to muscular political Zionism." 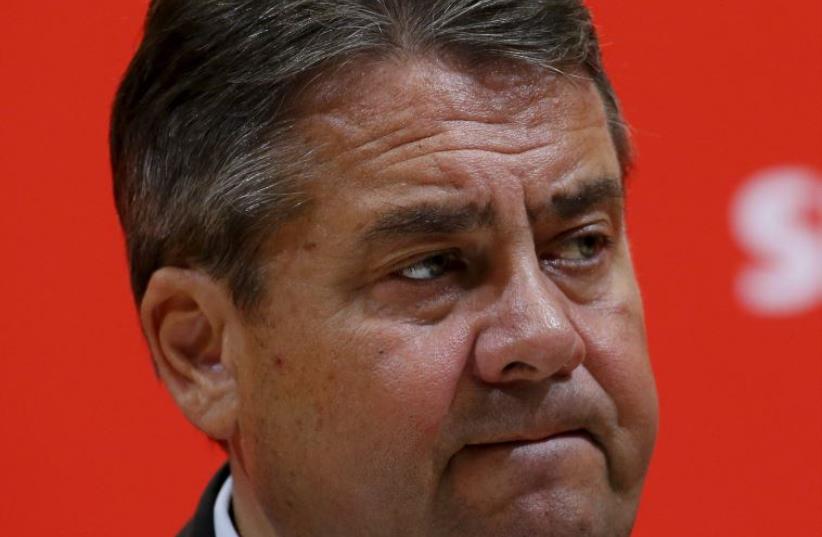 German Social Democratic Party (SPD) leader and Economy Minister Sigmar Gabriel
(photo credit: REUTERS)
Advertisement
German Foreign Minister Sigmar Gabriel’s ongoing assaults on the legitimacy of the Israeli government may actually be about winning the federal election in September.In the latest iteration of stoking antisemitic sentiments for electoral results, German journalists and experts have diagnosed a method to Gabriel’s escalating fights with Israel.“The current government is not Israel, also when it is so often presented,” Gabriel told the Hamburger Abendblatt paper on Saturday. When asked about Gabriel’s comment, a spokesman for the German Foreign Ministry on Saturday told The Jerusalem Post: “We will not comment.”Gabriel’s latest attack on Israel’s democracy follows his refusal to pull the plug on meetings with two hard-left Israeli NGOs that allegedly undercut Israel’s security and armed forces, according to Prime Minister Benjamin Netanyahu.Gabriel rejected Netanyahu’s offer to meet on Tuesday in exchange for canceling his appointments with the NGOs Breaking the Silence and B’Tselem.A new attitude survey shows Gabriel may very well be amplifying his hostility toward Israel’s government for his personal electoral gain. There is a huge pool of Germans who can be whipped up to vote for his Social Democratic Party because of hatred of Israel.Just last week, a new independent German government- commissioned report said roughly 40% of Germans reveal modern antisemitic views (loathing of the Jewish state). Prior to Gabriel’s visit to Israel, the poll researcher Emnid revealed Gabriel’s party behind (31%) the two conservative parties, which tallied a combined 36%.Writing on the website of NNN.de, the journalist Jan-Philipp Hein, who has published extensively on contemporary German antisemitism, dissected the foreign minister’s anti-Israel agitation within the context of multiple elections. “Gabriel as a high-ranking SPD election fighter staged a grand production in time for two state legislature elections and a federal election,” wrote Hein.Michael Spaney, the executive director of the Mideast Freedom Forum in Berlin, told the Post: “Gabriel said that Netanyahu rejected the meeting this week out of domestic reasons, while he himself is using the scandal for the social democrat’s election campaign in Germany. He used his post for party politics in order to gain support with his electorate, while he was expected to make a first encounter with his Israeli colleague.”Merkel, who clearly understands the modern expression of antisemitism in Germany (and how to combat the deadly virus), rushed to Gabriel’s defense. On Friday, when asked if she has Gabriel’s back, Merkel said: “Yes, he has that. We were in close contact during his visit to Israel.”Israeli diplomats are surely scratching their heads over the staying power of Merkel’s famous Knesset declaration in 2008: For her “Israel’s security is nonnegotiable.”
Netanyahu snubs German minister over plan to meet far - left groups like Breaking the Silence (credit: REUTERS)
Antisemitism and anti-Americanism have an unsavory history in post-Holocaust Germany of being exploited by power politics as tactics to secure votes. In 2002, Jürgen Möllemann’s (then a top Free Democratic Party politician) issued a mass-mailing of election flyers slamming the late prime minister Ariel Sharon. In the same year, the former Social Democratic chancellor Gerhard Schröder made great use of bashing America on the campaign trail to win the federal election. Gabriel seems to be invoking a kind of left-wing populism that mirrors some of the hard-right populist movements in Europe.Gabriel stumbled, wittingly or unwittingly, into a second fiasco in the German media. He wrote in an opinion article on Tuesday in the Frankfurter Rundschau daily that “Social democrats were, like the Jews, the first victims of the Holocaust. The social democrats were the victims of political persecution, the others [Jews] were victims of race madness.”The head of the Simon Wiesenthal Center’s Jerusalem office, Dr. Efraim Zuroff, told the Post that “anyone with knowledge of the Final Solution is aware of the fact that the fate of European Jews under the Nazis was different than any of the other victims of the Nazis.”Clemens Kohnen, a spokesman for the German Embassy in Tel Aviv, wrote the Post by email: “The Frankfurter Rundschau has published an article by our FM Gabriel on our bilateral relationship. The article contained a mistake that has been corrected right away in the online version.”The correction now reads: “Social democrats were, like the Jews, the first victims of the National Socialists.” It is unclear whether the print editions of the article that appeared in Cologne, Berlin and Frankfurt issued corrections.Gabriel’s conduct in Israel triggered widespread disgust with him from ordinary Israelis. In just one anecdote from many, an Israeli paper reported that five of six of people polled at a soccer match said “Bibi was right” regarding Gabriel.The journalist Wolfgang Pohrt captured the hubris of German elites when he described them as acting as Israel’s probation officers to prevent “their victims from relapsing.”His biting sarcasm surely resonates with Israelis.Rewind to 1981, when prime minister Menachem Begin launched a piercing attack on then-social democratic Chancellor Helmut Schmidt, a former Wehrmacht officer in World War II, for his arrogance in pushing his pro-Palestinian views on Israel.“From a moral point of view, Schmidt’s statements certainly rank as the most callous ever heard. It seems that the Holocaust had conveniently slipped his memory and he did not make mention of a million and a half small children murdered, of entire families wiped out.“The German debt to the Jewish people can never end, not in this generation and not in any other. The entire nation cheered on the murderers as long as they were victorious,” Begin said.Gabriel comes from a Nazi family. He severed contact with his father – a raging Nazi – after he discovered his father’s history at the age of 18.Gabriel’s spat with Netanyahu, like most anti-Israel scandals in Germany, appears to not be about Israel but how German elites can’t bring themselves to work through their reaction to muscular political Zionism.The writer is a fellow of the Foundation for Defense of Democracies.