Thousands of Jewish, Christian and Muslim women – Israelis and Palestinians – joined the march and filled the street parallel to that in which the prime minister resides. 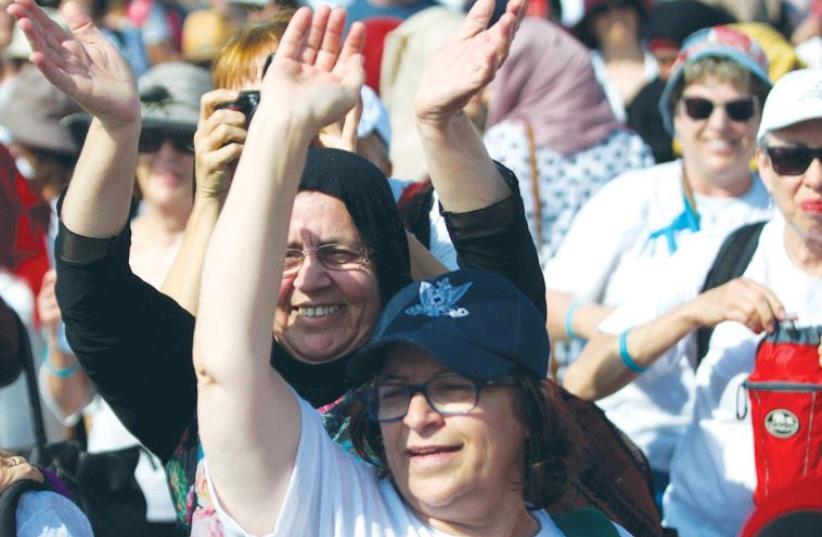 ISRAELIS AND PALESTINIANS rally in support of peace near Jericho on October 19.
(photo credit: REUTERS)
Advertisement
Although Hillary Clinton failed to break the glass ceiling as far as the presidency of the United States is concerned, women have broken and are breaking the glass ceiling in other areas, primarily in the quest for peace and social justice, as well as in other spheres such as finance, law, journalism and diplomacy.A senior woman diplomat in Israel’s Foreign Ministry attributes this to an ongoing situation of unequal pay for equal work. Exceptions not withstanding, most women in executive positions still earn less than male counterparts doing a similar job.In fact, salaries at the ministry are so dismal, says a senior male diplomat, that diplomacy is no longer a desired profession in Israel. This, he says, is why men leave the Foreign Ministry while women stay on, because they would still like the chance to work abroad without having to look for a job in a foreign country.On the other hand, the Bank of Israel is headed by a woman, as are nearly all of Israel’s major banks.In Israel and elsewhere in the world, women are in the forefront of battles for peace and social justice.Thirteen years ago, Vicki Knafo, a divorced single mother, marched from Mitzpe Ramon to Jerusalem to protest the cutbacks in payments to single mothers. Now she’s back protesting against the ridiculously low monthly payments to the disabled, to Holocaust survivors and to senior citizens.Of the three key leaders in the social-justice protest movement that mushroomed in Tel Aviv in August 2011, two were women: Daphni Leef, who was then a 25-year-old video editor and filmmaker; and Stav Shaffir, a young journalist. The male was Itzik Shmuli, chairman of the National Union of Israeli Students.Shaffir, 31, and Shmuli, 36, both continued their battle as Zionist Union members of Knesset, taking on an even wider range of social welfare issues than those for which they demonstrated in Tel Aviv’s Rothschild Boulevard.Last month, Liberian peace activist and Nobel Prize laureate Leymah Gbowee came to Israel to join Women Wage Peace in the last lap of their cross-country march. They entered Jerusalem to demand from Prime Minister Benjamin Netanyahu and the nation’s leaders that they do all in their power to put an end to the conflict with the Palestinians and reach an honorable agreement that will enable Palestinians and Israelis to live side by side in cooperative harmony.Thousands of Jewish, Christian and Muslim women – Israelis and Palestinians – joined the march and filled the street parallel to that in which the prime minister resides.This week two more foreign peace activists will be in Israel in an attempt to get people to put their hostilities behind them and work toward a better future for their children.Latifa Ibn Zlaten, a Moroccan- born practicing Muslim who lives in France, is visiting Israel this week under the auspices of the French Embassy, the French Institute, the French Consulate and the Israel Education Ministry to promote the second phase of a project that she launched last year in cooperation with the French Embassy and Israel’s Education Ministry. She will be in Israel on November 14 and 15.On Thursday, November 17, the Australian Embassy will be hosting Yassmin Abdel-Magied, a mechanical engineer who was born in Sudan but who has been living in Australia since she was two years old. Hers is a prominent voice for gender equality and women’s empowerment, not only in Australia but around the world. She is the founder of Youth without Borders, and her TED talk on unconscious bias has been viewed more than 1.5 million times on social media.This will feature in her discussion on Thursday at the Australian Embassy, where she will link women’s empowerment with unconscious bias.Abdel-Magied, though only 25, has made a tremendous social impact, perhaps because she has to battle discrimination on three fronts.As a woman, she has to deal with gender discrimination.As a native daughter of Sudan, she has to deal with racial discrimination. As a Muslim who wears a hijab, she has to deal with religious discrimination.Sometimes it hurts, but she has weathered the storm and carved out a career that enables people to recognize their own prejudices and to conquer them.Ibn Ziaten was the mother of four boys and a girl. Now there are three boys and a girl. One of her sons, Imad, was a sergeant in France’s first paratroop regiment when he was murdered in Toulouse in March 2012 by Islamist Mohamed Merah because he refused to obey Merah’s order to lie down. Merah shot him at point-blank range.To perpetuate his memory, his mother founded the Imad Ibn Ziaten Youth Association for Peace. Last year when she came to Israel, she launched her Living Together project, in which 15 French high-school students came to Israel and the Palestinian Authority to study life in both and form their own impressions.In February 2017, the program will be reversed with only six students – two Frenchmen, two Israelis and two Palestinians – traveling together on an educational journey to Paris, so they can be cultural ambassadors for each other’s cultures.During her visit to Israel, she will meet with Israeli high-school students at the French-Israel High School in Mikve Israel, where she will discuss peace and tolerance.In addition, an international group of WIZO women is in Israel to look at WIZO projects in general and to learn more about domestic violence in this country and the work of WIZO in sheltering and rehabilitating battered women and their children.