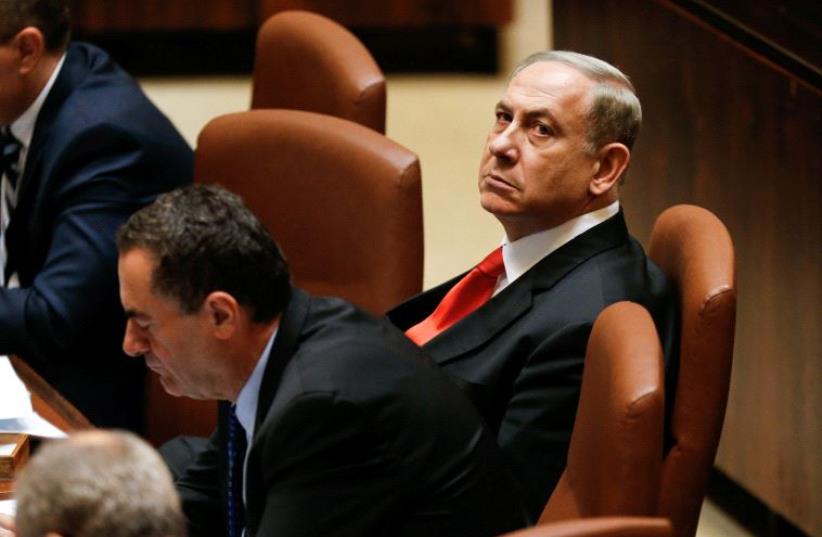 Benjamin Netanyahu
(photo credit: REUTERS)
NEW YORK – Prime Minister Benjamin Netanyahu’s reaction to last week’s anti-settlement UN resolution has little to do with foreign policy and more to do with internal politics, according to the Israel Policy Forum’s Dr. Nimrod Novik.Since the resolution passed, Netanyahu has been criticized for his aggressive response to the vote, which included accusing Washington of organizing and advancing the resolution; recalling Israel’s ambassadors to Senegal and New Zealand; summoning the ambassadors of all the UN Security Council states; and calling on ministers to curtail visits to the 14 countries that voted for the measure.“I don’t think that any of that has much to do with foreign policy,” Novik said during a media conference call of the Policy Forum on Wednesday.“I believe that the prime minister has been aware of this moment – the moment between the election and the inauguration – and for a long time was concerned with the possibility that the US would take a step in order to enshrine some legacy on the Palestinian-Israeli issue.”Novik – who once served as former senior adviser on foreign policy to Shimon Peres – believes Netanyahu was mostly worried about the possibility of a UN Security Council resolution, “either on settlements that the Palestinians were pushing, or on a parameters resolution of the sort that Kerry’s speech included.”The passing of the resolution, he added, could be signaling to Netanyahu “the beginning of the end of his tenure,” provoking a reaction which Novik described as “a series of very unimpressive, almost hysterical, certainly pathetic threats to various countries.“Netanyahu is challenged today from three quarters: To his Right, by Naftali Bennett... to the center right by Yair Lapid... and the third source of challenge to his tenure is the legal system,” he said, referring to the criminal investigation Netanyahu is now facing for corruption. “I think that the prime minister’s moves over the past year were colored pretty much by those factors.”Between the concern with consequences of a UN Security Council resolution on one hand, and the fear of losing his base to Naftali Bennett on the other, Novik said, the latter consideration prevailed time and again.llan Goldenberg, former chief of staff to the special envoy for Israeli-Palestinian negotiations during the last round of talks, also joined the call. Despite Netanyahu’s claims the US colluded with Palestinians to bring about the resolution, he said, “it’s pretty clear the Obama administration has been signaling for months that they might consider something like this. I think ultimately what the Obama administration had was a very difficult choice to make on what was certainly an imperfect resolution.“Settlements are a huge problem. They are one of the threats to the two-state solution, there is no question about it,” Goldenberg continued.“Prime Minister Netanyahu argued he is for a two-state solution, but the majority of his cabinet is not, and when you look at that as the Obama administration, and you have an opportunity to weigh in on something as important as this, you take it.”While Goldenberg admitted there are “real problems with the resolution,” including the forum in which it was passed, and language that “does not differentiate between Jerusalem and places like Amona,” he believes abstaining from the vote was “a close call, but the right call.“It’s not going to fundamentally change anything in Israel overnight, it might not fundamentally change anything about the conflict in the long term, sadly. But I think there was a rationale for doing it, if it’s what you believe is right.”

Tags us israel relations
Subscribe for our daily newsletter