With thousands of avid fans on their feet from the get-go, the 68-year-old Alice Cooper showed no signs of aging – in body or voice. 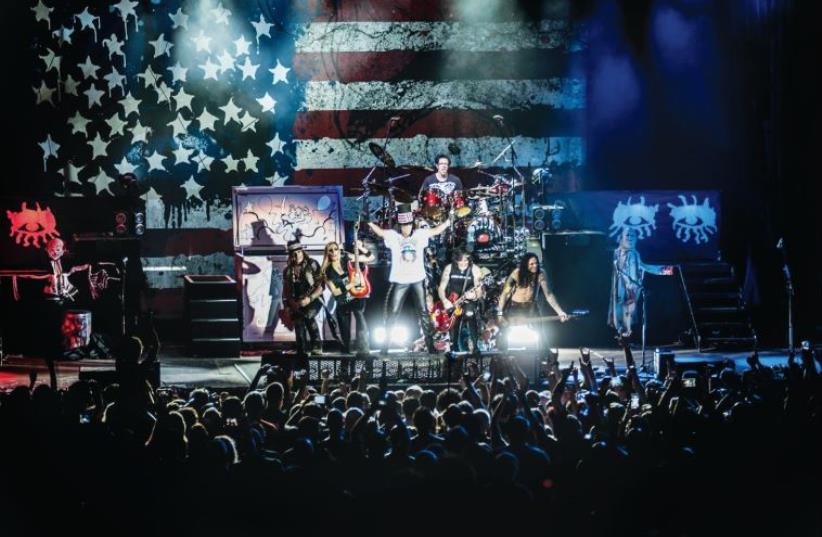 SHOCK-ROCK legend Alice Cooper welcomed local fans into his nightmare with a killer show at the Ra’anana Amphitheater.
(photo credit: LIOR KETER)
Advertisement
With all of the props and makeup that go into an Alice Cooper concert, it’s easy to forget that the band invests “80% of our efforts on music and 20% on theatrics,” as Cooper indicated on his arrival here last week. And Thursday night’s show at Ra’anana Park Amphitheater more than validated the words of the pioneer of shock rock.In the band’s first visit to Israel, Cooper performed a thunderous and electrifying musical (and theatrical) display for the ages. Opening the show with a monologue by horror film star Vincent Price that segued into “Black Widow,” Cooper and his cohorts spent the next 90 minutes playing, and acting out, some 20 of the band’s countless greatest hits.With thousands of avid fans on their feet from the get-go, the 68-year-old Cooper showed no signs of aging – in body or voice.Constantly gliding across the stage with baton, sword or crutch in hand, Cooper changed black jackets from one song to the next with the assistance of a clown popping out of a pink toy box.Cooper cut to the chase early on with the greatest of his greatest hits, “Poison,” which was introduced by a guitar solo by female phenom Nita Strauss, who was decked out in a leather outfit that would make Hells Angels proud. In a riveting version of “Halo of Flies,” Cooper “conducted” the string quartet of Strauss, guitarists Ryan Roxie and Tommy Henriksen and longtime bassist Chuck Garric, followed by Glen Sobel’s deft drum solo.“Feed My Frankenstein” provided an entrée into the show’s serious theatrics, as an enormous diabolical machine transformed Cooper into a 15-foot tall monster, followed by his dance of death with a pink-clad doll during “Cold Ethyl.” Tied up in a straitjacket with a nurse sedating him with an oversized syringe, Cooper delivered a haunting version of “Ballad of Dwight Fry,” followed by the coup de grâce – a guillotine that left Cooper decapitated in “Killer” and “I Love the Dead.”Renowned for raising the dead, Cooper quickly recovered and performed a series of four covers in memory of some of his closest friends. With a gravestone image of each musician unveiled at the outset of each song, Cooper warmed up with The Who’s “Pinball Wizard” in memory of Keith Moon and “Fire” by Jimi Hendrix. But he reached peak performance in powerful versions of David Bowie’s “Suffragette City” and Motörhead’s “Ace of Spades,” in memory of Lemmy Kilmister.Amping the show up one final notch, the band performed “I’m Eighteen” and everyone’s favorite, “School’s Out.” In the latter, refrains of Pink Floyd’s “Another Brick in the Wall” were seamlessly integrated.Cooper’s apolitical stance, as opposed to that of Pink Floyd front man Roger Waters, was even more evident in the encore. With an image of the stars and stripes in the background, Cooper bounded on stage with a T shirt promoting his “Make America Sick Again” campaign for the US presidency. Accompanied by a confrontation between The Donald and Hillary Clinton that ended in a passionate kiss, in yet a more impassioned version of “Elected,” the finale left no doubt that with Alice Cooper, music always trumps theatrics.