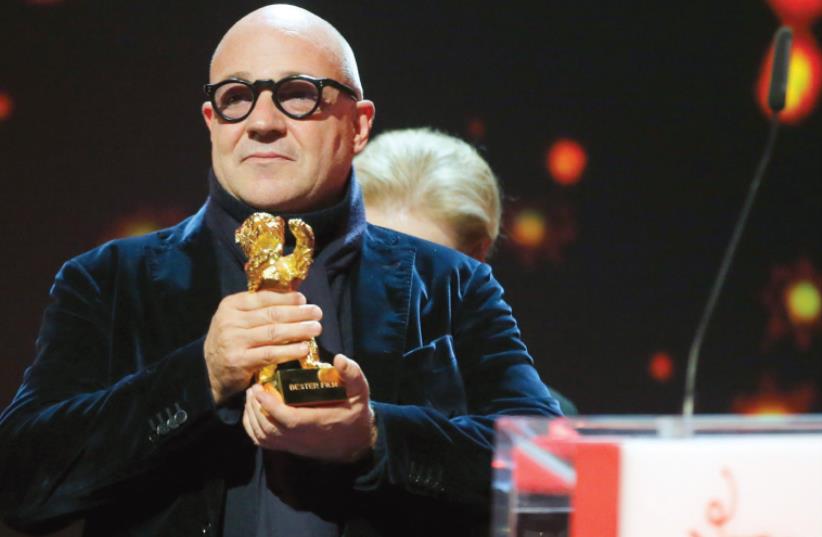 DIRECTOR GIANFRANCO ROSI receives the Golden Bear – Best Film award for the movie ‘Fire at Sea’ at the 66th Berlinale International Film Festival.
(photo credit: REUTERS/FABRIZIO BENSCH)
Advertisement
The 66th Berlinale, the Berlin International Film Festival, concluded on Saturday and Sunday with ceremonies in which the prizes of the various juries were awarded, and movies spotlighting Israel, women and the migrant crisis received some of the festival’s most important awards.The Berlinale has always welcomed Israeli cinema.While the boycott, divestment and sanctions (BDS) movement has made a lot of headlines this past year, the reception of Israeli films at the Berlinale has always been the reverse of a boycott – it’s more like an embrace.This year, while there were no Israeli films in the main competition, Israeli films in the Panorama section, which featured 51 movies from 33 countries, won Audience Awards: Udi Aloni’s Junction 48 in the fiction film category and Tomer and Barak Heymann’s Who’s Gonna Love Me Now? in the documentary section.These awards are of great importance because they directly reflect the taste of the audience. During the festival, moviegoers were asked to rate the films shown in the Panorama section on voting cards after the screenings. A total of 30,000 votes were cast.Aloni’s Junction 48 tells the story of a Palestinian rapper in Lod. Since 2003 Aloni has presented all of his films at Berlin.The Heymann brothers’ Who’s Gonna Love Me Now? is about an Israeli gay man with HIV who lives in London, and his relationship with his family. This is the second Panorama Audience Award for Tomer Heymann, whose documentary, Paper Dolls, won in 2006.The International Jury was headed by Meryl Streep, and given her statements at a master class she taught for acting students at the festival about the lack of movies being made telling older women’s stories, and the fact that she has established a screenwriting workshop for women over 40, there was speculation that movies by and about women would be recognized when the awards were given out, and they were.The young French actress-turned-director, Mia Hansen- Løve, won the Silver Bear for Best Director for her film, L’Avenir (Things to Come), a movie about a philosophy teacher (Isabelle Huppert), who blossoms after her husband leaves her.There were dozens of contenders for the Silver Bear for Best Actress, and in the end it went to Trine Dyrholm for Thomas Vinterberg’s The Commune, a movie based on the Danish director’s memories of a childhood spent on a commune in the Seventies. Dyrholm (who is currently starring on the television series The Legacy, which is broadcast on YES in Israel) plays a woman whose husband leaves her for one of his young students, and in the spirit of hippie tolerance, invites his lover to move into their house, then falls apart. It’s a complex role and an affecting performance that is just the kind of part Streep would have played had it been an American movie.The top award of the festival, the Golden Bear, went to a documentary, Gianfranco Rosi’s Fire at Sea, which juxtaposes the life of the family of a fisherman on the tiny Italian island of Lampedusa with the arrivals of thousands of migrants by boat. The deceptively simple movie says more about the crisis, and Europe’s response to it, than a thousand news reports, and it was no surprise that it won the main prize this year.While the festival featured an almost non-stop parade of stars on the red carpet – among them George Clooney, Channing Tatum and Tilda Swinton from Hail, Caesar!, Jude Law and Colin Firth from Genius, Gerard Depardieu from Saint Amour, Emma Thompson from Alone in Berlin, Isabelle Huppert from L’Avenir, Julianne Moore and Greta Gerwig from Maggie’s Plan, John Cusack from Chi-Raq, Kirsten Dunst from Midnight Special, Hugh Laurie and Tom Hiddleston from The Night Manager – it also struck a balance between the glamour they brought, and serious movies. Danis Tanovic’s Death in Sarajevo, which won the Silver Bear Grand Jury Prize, looked at how the past haunts that city. The Silver Bear Alfred Bauer Prize for a feature film that opens new perspectives went to Lav Diaz’s A Lullaby to the Sorrowful Mystery, a 485-minute epic about the struggle against Spanish colonial rule in the Philippines during the late nineteenth century.I heard great things about A Lullaby, but I will admit I was too dazzled by the red carpet and the stars’ press conferences to spend eight hours watching a single movie. Blame it on Dieter Kosslick, the festival’s director, for combining all the most exciting aspects of world cinema into a single event – choosing what to see, and which event to cover, was never easy, but it was the most enjoyable dilemma imaginable. For a movie lover, the Berlinale is cinema Disneyland.