It is possible, that the American football arena could be next for the Israeli women and men to prove themselves and show their might.

By ZACHARY KEYSER
AUGUST 31, 2019 17:55
Israeli Flag Football Team
(photo credit: AYELET FEDERATION OF NON-OLYMPIC SPORT IN ISRAEL)
Advertisement
Preparations for the ninth edition of the Flag Football European Championships are set and ready to light up Jerusalem for the first time with games starting this Thursday at 8am, with teams from a dozen different countries ready to hit the gridiron and participate in this year's tournament at the Kraft Family Sports Campus.The three-day event will feature both the Women's and Men's divisional tournaments - the Israeli women's and men's national teams are ranked identically, second in Europe and fifth in the world, which gives the two Israeli teams a great chance to take home this year's gold.Many of the players include amateur athletes who participate in the tournaments year after year, in addition many of these athletes to volunteer with domestic youth programs in efforts to make sports a larger part of the country and Israeli life.Sarah Meissenberg of the women's team, a nurse by by day and football player by night, made aliyah from the U.S. in 2013, and has been working hard to make the country more sporting place in her own right. She also currently coaches a group of young girls in lacrosse and flag football - bringing the American bravado and sports culture across the sea over to the Mediterranean Holy Land.Shana Sprang also of the women's squad, a rehabilitative physiotherapist by profession, believes that Israel will be able to achieve impressive achievements in the less popular sports here - as they have already done within the sport of lacrosse. 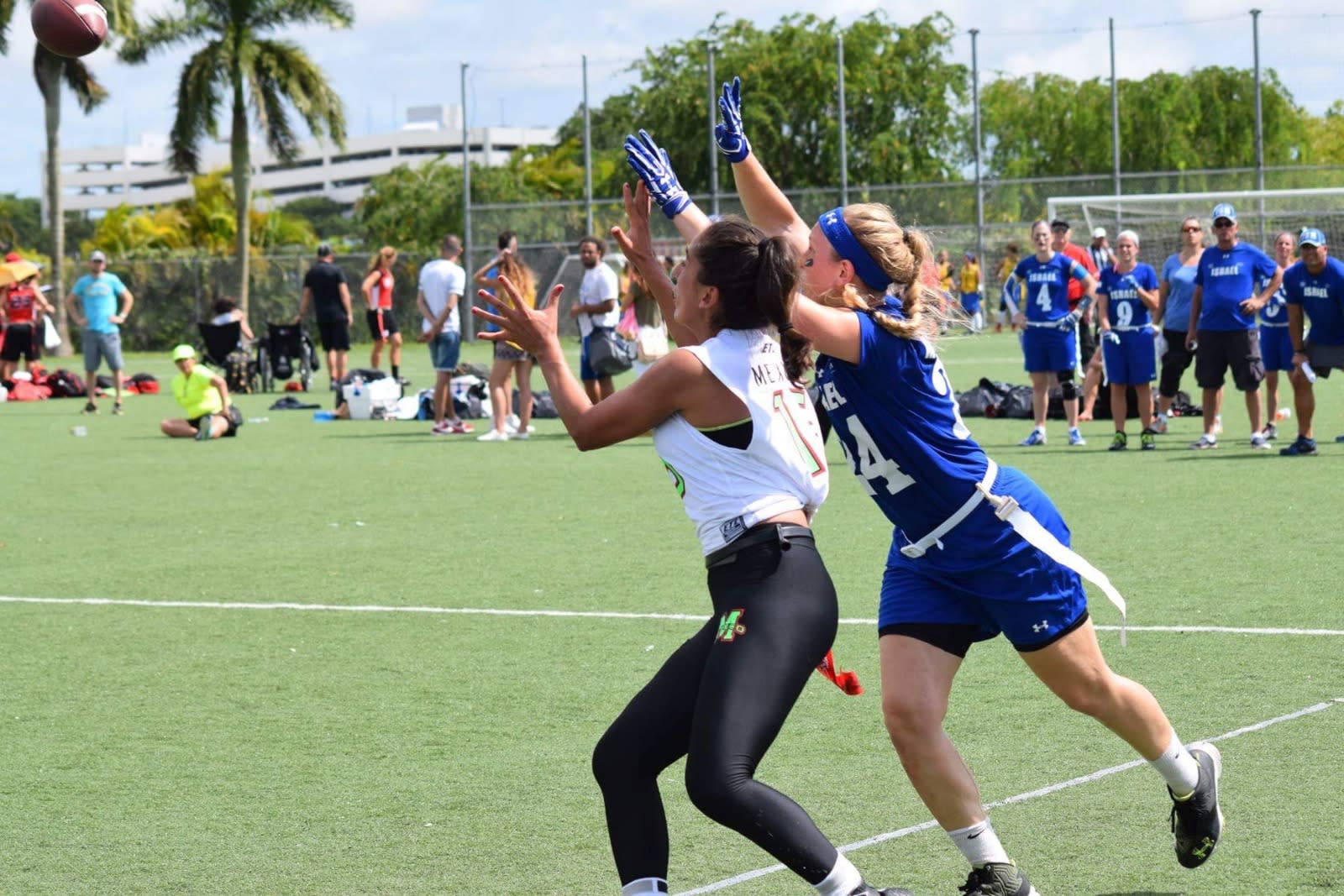 Lacrosse is one of, if not the fastest growing sport in Israel - although an unpopular sport around the world. Players say it is popular not only due to the excitement of the game itself, but because it is a way to bridge the divide between Israel and other countries. The 2019 Women’s European Lacrosse Championship took place in Israel last month. The Israeli women’s national team won a silver medal, coming in second place behind England.It is possible, that the American football arena could be next for the Israeli women and men to prove themselves and show their might.“The opening of this event marks the beginning of a celebration of football which I hope will inspire current players and add to the growing momentum behind the growth of flag football. To all the players, we congratulate you and wish you well here in Israel. Your individual skill is to be celebrated, but your success will be determined and defined by your team play,” International Federation of American Football (IFAF) President Richard Maclean said.For the uninformed - flag football is a modified version of American football with less contact involved. The general rules are similar to that of conventional American football, however, instead of the defensive team tackling the offensive player to stop the down, they must remove the flag from the ball. It is considered a more recreational way to play the game, as it avoids physical contact and injury."The men’s and women’s competitions will each be divided in to “A” and “B” divisions for the group stage of the competition on August 29 and 30. The medals and placement games will take place on Sunday, September 1 and the schedule for those games will be announced after the conclusion of Friday’s last games," according to the released statement."The tournament marks the re-unification of European Flag Football, after a split in the International Federation of American Football (IFAF) resulted in two separate European Championships being played in the summer of 2017."On the women’s side, Austria is the heavy favorite to win the tournament, with an already stellar resume of winning five gold medals throughout the nine European competitions held, a 56% success rate, including taking first place on the Madrid stage in 2017.In regards to the European Championship played in Copenhagen - Denmark is the co-title defender after winning the separately held 2017 European Championship, during the split.The Israeli teams are both looking strong after earning silver medals at the 2017 Copenhagen European Championship, and the women earning a seventh-place finish at the International World Championships in Florida in 2016."Joining Austria in Group A is Finland, Italy, Great Britain, Sweden and Spain. Joining Denmark in Group B is Russia, France, Israel and the Czech Republic," read the statement.With regards to the men's division, Denmark has proven year after year to be the European powerhouse, winning five straight gold medals, including taking home the 2017 Copenhagen title - the Austrian men at this time could prove to be their toughest competition, as they took home the gold in Madrid, a tournament Denmark was absent from."Austria leads Group A, which also includes Israel, France, Sweden and Spain. Denmark is joined in Group B by Great Britain, Italy, Switzerland and Russia," read the statement.The Israeli men team are led by rookie coach and former player Benjamin Schultz. The women’s team is coached by Elissa Saroskin.AFI Vice President Yonah Mishaan, and former longtime women’s coach, believes that both Israeli teams have what it takes to prove themselves worthy on this year’s gridiron, and take home the coveted title.“On the one hand this will be a tougher tournament than in 2017 because all of the best teams in Europe will be here,” noted Mishaan. “On the other hand, we have home field advantage for the first time, and I hope that fans will come out to push us toward the top of the podium.”Major tournament sponsors include New England Patriots owner Robert Kraft and the Kraft Family, Ira and Yael Kleinman as well as Simon and Jana Falic. The local tournament sponsors include the Israel Sports Authority, the Ayelet Non-Olympic Sports Federation of Israel and the Jerusalem Municipality.Many of these organizations - notably the Ayelet Sports Federation, who is the overseeing body for all non-Olympic sports in Israel - promotes, provides athletic scholarships, equipment and finance for competitions, develops sport and more; including being a majors sponsor of promoting lacrosse and less popular sports within the country, such as American football. The tournament is being organized in cooperation between the IFAF and American Football in Israel (AFI)."It is a great honor to host the flag football European championships in Israel in general and particularly in Jerusalem. American football is growing in Europe. The same is true for Israel, and it a pleasure to see that more and more Israelis are exposed to the game and take part in the various leagues here in Israel," said Ayelet President Arik Kaplan.Entry to all games is free of charge and there will be 30 hours of live webcast coverage of the games. Visit www.ffecisrael2019.com for an updated tournament schedule and additional information.