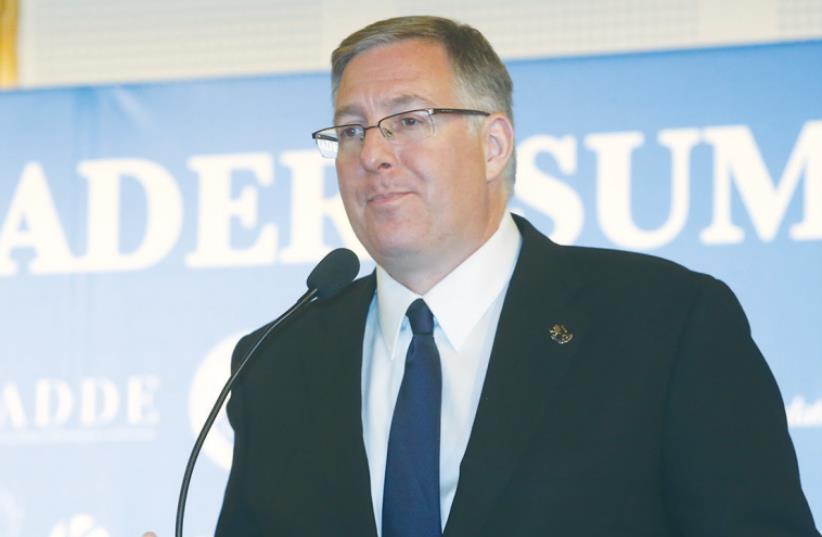 POLITICAL strategist and author Joel Rosenberg
(photo credit: MARC ISRAEL SELLEM/THE JERUSALEM POST)
Advertisement
The gravest threat facing the world today is indisputably radical Islam, the American-Israeli New York Times best-selling author and former US and Israel political adviser, Joel Rosenberg, said at the Jerusalem Leadership Summit in the capital on Wednesday.While he emphasized that the vast majority of Muslims are not radicals, Rosenberg, whose debut novel, The Last Jihad, published in 2002, was an international bestseller, contended that even at a fraction of the world’s 1.6 billion Muslim population, the extremists pose an imminent threat.“If you look at some of the polling that’s been done about the attitudes in the Muslim world, you see that 90% or more are moderate, really peaceful people,” said Rosenberg, during his lecture at the Inbal Hotel, adding that only between 7%-10% of Muslims express approval of radical Islam.“However, in a world of 1.6 billion Muslims, 10% is 160 million people. That’s half the population of the United States; if you grouped them in one country...you have one of the largest country’s on the planet.”Therefore, Rosenberg said, he takes issue with US President Barack Obama’s contention that the fight against Muslim terrorists is not a “war against Islam.”“You cannot say that those in the 160 million category are not driven by Islam,” he said.“They say they are. You can call it a ‘perversion,’ but you have to understand why they would say that Islam motivates them? Whether that’s pure Islam or not, I’ll leave that to the Islamic scholars.”Noting that the king of Jordan, Abdullah II, a descendant of Muhammad, has said that “the West is engaged in a third world war against Islamic terrorism,” Rosenberg said that Abdullah has conceded that Muslims themselves must do far more to fight the killers in their midst.“At its core, King Abdullah says: ‘This is a Muslim problem...we need to take ownership of this. We Muslims need to stand up and say what is right and what is wrong,’” he said.Moreover, Rosenberg cited Egyptian President Abdel Fattah al-Sisi as recently warning religious leaders at Al-Azhar University that the fight against radical Islam must be fought by moderate Muslims.“At the Harvard of Sunni Islam, he said directly to the clerics and to the professors: ‘This is your mission. You will be held to account if you do not confront this problem inside Islam,’” Sisi said.“So Muslim leaders say that it is a problem in Islam, and obviously, it is.”Extrapolating from the unexpected attacks on Pearl Harbor and New York City during 911, Rosenberg said that the theme of his novels is that “to misunderstand the nature and threat of evil is to risk being blindsided by it.”“We were blindsided by a theology and an ideology... that we did not understand,” he said.“Was it understandable? Yes it was. But did we as leaders in America, and in the West generally, understand it and take it seriously? We did not.”Rosenberg went on to cite Obama’s “catastrophic” Iranian nuclear deal as a case in point of the inherent dangers of not understanding the consequences of radical Islam.“He believes that he’s Nixon and he’s dealing with China...and that Iran wants to be part of the world’s system, that they feel isolated and left out,” he said.“So, let’s bring them in... and hope that gradually, they will evolve into a player that we can deal with.”Such a supposition, Rosenberg warned, is profoundly naïve and dangerous, despite the fact that the majority of Iranians want freedom and to be integrated into the world.“If you base your analysis on the Iranian people, you come to the conclusion that they want engagement,” he said. “The key is the top: the Ayatollah and his inner circle. The question is not what the country wants... the question is what the supreme leader and his inner circle want.What do they believe?” “Because if you misunderstand what they believe,” he continued, “you will be blindsided.”He contended that Iran, which is far more patient than ISIS, poses the larger threat of genocide.“Iran’s leadership says: ‘No, we’re not going to build a caliphate now, we’re going to build nuclear weapons because once we’re ready for genocide, we’re not going to use swords and AK-47s, we’re going to use atomic weaponry. We’re going to be able to kill millions, and not just thousands.’” Iran, he warned, is “biding its time.”
sign up to our newsletter