Avratech-Ravtech platform could eventually train and employ thousands of haredi men, if the state and other institutions give it sufficient backing. 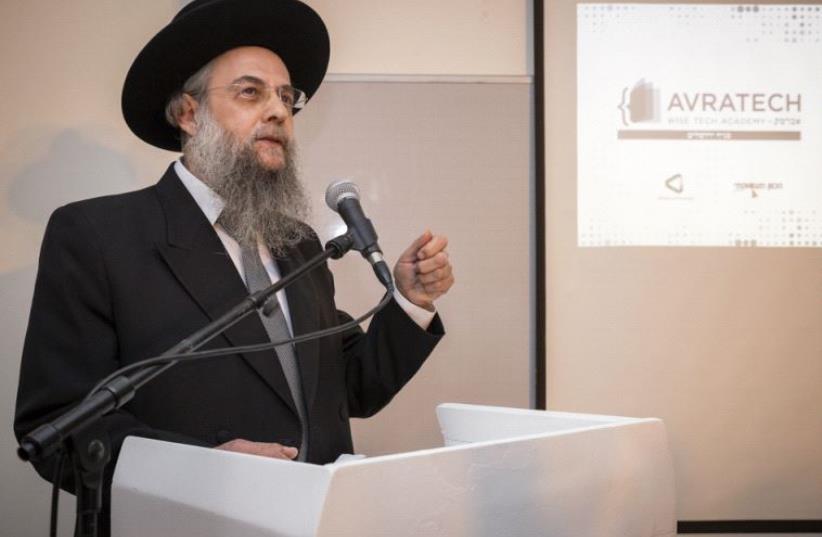 Rabbi Leybel
(photo credit: YAM VIGNOLA)
Advertisement
A combined vocational training and employment initiative for haredi men that has successfully brought men from the hardcore of haredi society into employment in the hi-tech sector has now expanded from its Bnei Brak base into Jerusalem.Avratech, which provides a 12 month course in software programming for haredi men followed by a guaranteed job in its programming business, opened its new branch in Jerusalem’s city center Sunday night where its latest intake of students join its program.Some 30 men have already begun the preparatory study program which includes basic English and Mathematics studies, and will now embark on the programing aspect of the course.Founded in 2013 by haredi businessman Rabbi David Leybel, Avratech is now conducting its fourth annual course.The company accepts approximately 30 candidates for every course at present, although the numbers applying have grown dramatically, from around 100 applicants in 2013 to more than 600 for the new course in Jerusalem.The daily schedule of those participating in the course includes three hours of Talmud study in the morning, and six and a half hours of vocational studies, first in basic education fields which many haredi men do not study while in the haredi school system and then in programming.After finishing the course, the graduates are guaranteed at least 30 months work in Avratech’s business arm, RavTech, where they provide software programming and development services to a range of clients from financial service companies to content providers and haredi media companies.Currently there are 50 Avratech graduates working at RavTech’s headquarters in Bnei Brak, on a similar schedule to the training course where they continue to combine religious studies in their work day.There has been a 20 percent drop out rate from the course, a low figure compared to the high drop-out rates in the haredi sector from higher education courses, while some of the Avratech graduates have already moved on to work for other companies.Wages are similar to that of the general market place for entry level programmers, although since less hours are worked the monthly salary is lower, coming out to approximately NIS 5,000 - NIS 5,500.Notably, all of the graduates are from the hardcore of haredi society, not the margins as is the case in similar programs, and include students from famous haredi yeshivas such as Ponivizeh, Slabotke, Beit Matityahu and the Mir, says Aaron Sofrai, head of the Avratech education department.The RavTech company is run on a “social-business” platform, in that it is a for-profit company but reinvests its profits in the non-profit aspect of the initiative, Avratech’s training program.When Leybel initially set up the Avratech he injected his own funds into the initiative, while other partners and philanthropic foundations have also backed the project.At the opening event on Sunday night, Jerusalem Mayor Nir Barkat was present to congratulate the company on its new branch and welcome them to the city, a welcome which has been bolstered by a grant from the Jerusalem Development Company, an arm of the Jerusalem Municipalx Council, to fund 20 percent of the costs of the training course in the Jerusalem branch over the next three years.Sofrai notes firmly that the company does not seek to bring in yeshiva students who are content to continue studying in yeshiva, but instead sees itself as a means through which haredi men who for whatever reason decide not to go into higher education can get a foot in the door of the Israeli work force.“There are haredi men for whom academic studies is not an option, often because when they start looking for work options they are already 25, married and have three kids,” says Sofrai.“If he needs to bring home money to support his family while studying for three years [in higher education] and then even not know if he’ll have a job at the end, this makes such an option very hard.”Sofrai acknowledges that after the 12 month course, the new recruits are still extremely raw and often require several more months on the job before they are productive and competent.Yet he says that after approximately three months, most are up to speed and says that RavTech is now breaking even.“The graduates aren’t like graduates of [the prestigious IDF intelligence unit] 8200, but we have a very practical, very intensive course, where all the teachers are programmers themselves and gives the students the basic requirements to begin work in the field.”And although the program has only a small number of places available every year, Sofrai says that the Avratech-RavTech platform could eventually train and employ thousands of haredi men, if the state and other institutions give it sufficient backing.