The report, “How’s life?” is the first of its kind issued by the government and aims to provide an all-encompassing picture of the state of Israeli society. 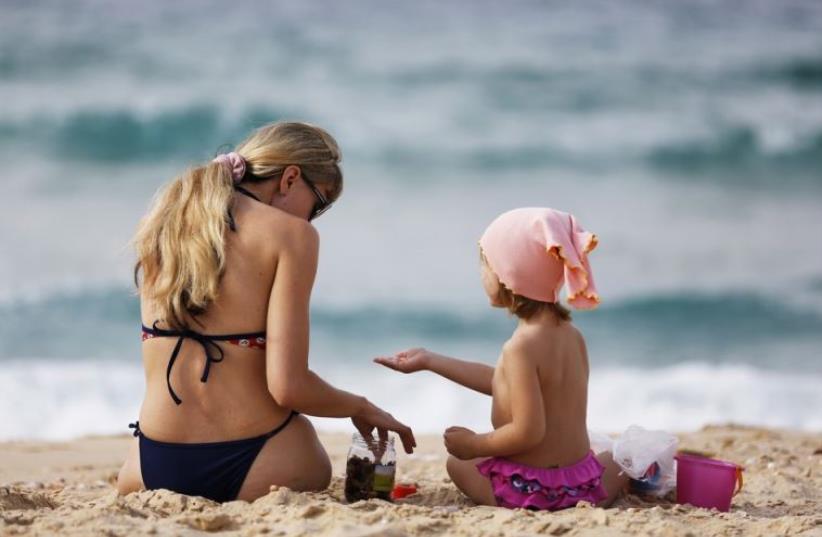 A woman and a girl sit in front of the Mediterranean at the beach in the southern Israeli city of Ashkelon
(photo credit: REUTERS)
Advertisement
Only 55 percent of Israelis – 49% of Arabs and 56% of Jews – believe their lives will improve in the coming years, according to a report the Central Bureau of Statistics released on Wednesday.The report, “How’s life?” is the first of its kind issued by the government and aims to provide an all-encompassing picture of the state of Israeli society.It was presented to the Knesset by Environmental Protection Minister Avi Gabbay; Prof. Avi Simhon, chairman of the National Economic Council; and Government Statistician Prof. Danny Pfeffermann.In 2013, 86% of Israelis aged 20 and above were “very satisfied” or “satisfied” with their lives – 89% of Jews and 73% of Arabs, according to the report.Despite this impressive figure, only 55% of Israelis said their lives would improve in the next few years.Sixty-six percent of the respondents aged 20 and above said they could successfully deal with problems on a regular basis. The figure differed drastically between Jews and Arabs, however – at 72% compared to 35%, respectively.The report examined life across nine fields – employment, housing, education, personal security, health, well-being, environment, standard of living, and civic engagement.• Some 60.4% of Israeli adults had jobs in 2014, up from 49.7% in 2000, the report found.The figure for Jews was 64%, while the rate among the Arab population stood at only 42.5%. The gap in employment rates between the Jewish and Arab sectors increased from 14.4 percentage points in 2000 to 21.6 in 2014.And 87.6% of Israelis were satisfied with their jobs in 2014, up from 81.4% in 2002.In both years, the highest average job satisfaction was found among Jewish women, while the lowest was recorded among Arab men.Despite the increase in job satisfaction, only 60% of employees were satisfied with their salaries in 2014.Still, this reflected an increase compared to 53% in 2008 and 45% in 2002.• Some 32.8% of households spend 30% or more of their net income on housing, down slightly from 33.6% of households in 2000.However, more than half of households in the bottom tenth percentile spend more than 30% of their income on housing – reflecting a trend that has been on the rise since 2011.In contrast, only 14.9% of households in the top tenth percentile spend more than 30% of their income on housing.Nevertheless, the data revealed that in 2013, 84% of Israelis were generally satisfied with their homes – 86% among the Jewish population and 73% among the Arab population.Furthermore, 83% of Israelis were satisfied with their neighborhoods.Bnei Brak was the city with the highest proportion of people, some 94%, satisfied with their apartments, followed by Tel Aviv with 89%. In contrast, only 77% of Jerusalemites were satisfied with their apartments.Ramat Gan was the city where residents were most satisfied in living there, with 93% satisfaction, followed by Rishon Lezion, 89%, and Tel Aviv, 88%. In contrast, only 75% of Jerusalemites said they were satisfied living in the capital.• In the field of personal safety, in 2014, 73% of adults aged 20 and above said they felt safe to walk around at night in their neighborhoods – 63% of women and 84% of men.This figure, the report stated, is on par with the European average, according to a survey conducted among European countries in 2012.Rishon Lezion and Tel Aviv were the two big cities where people felt safest, while Jerusalem and Ashdod were the two cities where Israelis felt least safe.Furthermore, Arabs felt safer walking around at night than Jews, 83% compared to 72%, respectively.• In the health category, the report found that the average life expectancy for Israelis stood at 82.1 years – 84.1 years for women and 80.3 years for men – 1.6 years above the OECD average.Furthermore, in 2013 some 80% of the population aged 20 and above said their health was “very good” or “good.” As such, Israel ranks eighth among OECD countries, and well above the OECD average of 69.2%.Israel has a lower proportion of smokers than the OECD average, 16.2% of people aged 21 and over compared to 19.7%.The findings also revealed that 34% of the population aged 20 and above suffered from depression “often” or “every now and then” – 49% of Arabs and 30% of Jews.• With regard to education, the report compared Israel to other countries based in part on the PISA international standardized test.The proportion of Israeli students who “had difficulties” in mathematics studies in 2012 stood at 34% – well above the OECD average of 23%. This marked an 8 percentage point improvement from 2006.In contrast, only 9% of Israeli students were “outstanding,” also below the OECD average of 13%, according to the researchers.The findings also indicated that 54.1% of Israelis had higher education or education above the high school level, up from 44% in 2001. However, there remains a 26.4-percentage point gap between the Jewish population and the Arab population, at 59.6% and 33.2%, respectively.In breaking this down by gender, the report found that there were more educated women than men, at 63.4% and 45.6%, respectively, with the gap up from up from 7.4 percentage points in 2001.• The report also examined civic participation and found that the percentage of Israeli adults voting in elections in 2015 stood at 72.3%, above the OECD average of 68.6%.More Israelis are giving back and volunteering – some 20% in 2013, up from 15% in 2002, according to the report.