Local councils threatening to strike on Wednesday over budget cuts 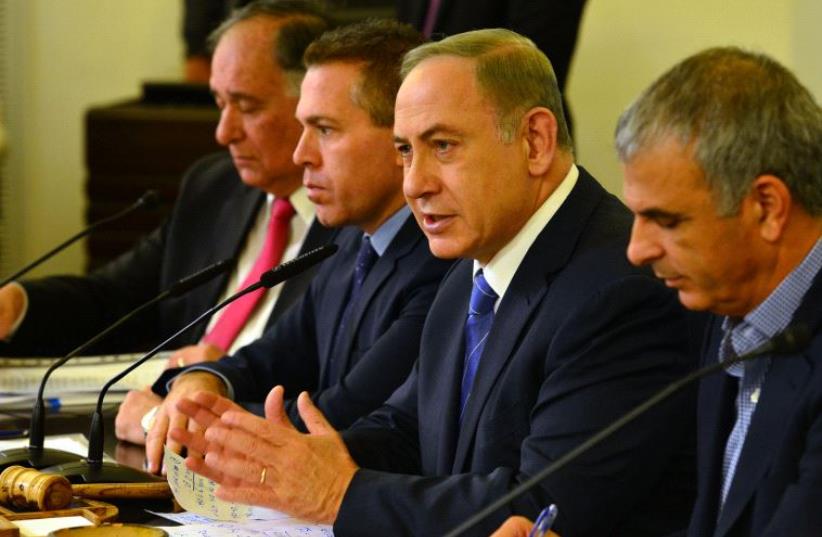 Weekly cabinet meeting held this week at the Haifa Municipality ‏
(photo credit: KOBI GIDEON/GPO)
Advertisement
The Federation of Local Authorities in Israel (FLAI) announced Tuesday that all local, regional and municipal authorities across the country will go on an all-out strike on Wednesday if the Knesset approves the proposed budget cuts from the municipal authorities as part of the economic arrangements bill.“We have been in talks all day with the Prime Minister’s Office, the Finance and Interior Ministries, but as it seems right now the head of the Finance Ministry’s Budget Department is calling the shots and a strike is highly likely,” head of the FLAI and Modi’in Mayor Haim Bibas told The Jerusalem Post.The FLAI held an emergency meeting on Tuesday in the Knesset with mayors and municipal authority heads, during which they communicated their demands to Prime Minister Benjamin Netanyahu and Finance Minister Moshe Kahlon. The group demanded the state “honor the previous arrangements and transfer the full balancing budget amounting to NIS 1.55 billion during the first six months of 2017.”According to Bibas, the heads of all of Israel’s 256 authorities – cities, local councils, regional councils – will cut all services and close all municipal departments as of Wednesday unless an agreement is made.That includes waste disposal and sanitation, welfare, cultural institutions, municipal security and schools and kindergartens, with the exception of special education facilities that will remain open.Additionally, Ran Erez, chairman of the Secondary School and College Teachers Organization declared on Tuesday that his organization will also join FLAI’s strike. This means that in addition to municipal kindergartens and elementary schools, junior high schools and high schools across the country would also close.The Finance Committee approved on Sunday a flat budget cut of NIS 2.1b. Additionally, the cabinet also approved Sunday morning a surprise NIS 1.2b. flat cut, which was later also approved by the Finance Committee.The cuts will be up for a vote in the Knesset plenum as part of the state budget and accompanying economic arrangements bill. If approved by the Knesset, the cut will be taken from the municipal authorities’ balancing budget.“Overall, they did two cuts that will amount to a NIS 180m. This is the first time in history that a cut has been made to the authorities’ balancing budgets,” Bibas told the Post.The municipal authorities balancing budget is normally distributed among the country’s municipalities and councils for their basic budgets in order to prevent a deficit that might result in the disruption of the authorities’ basic services.According to Bibas, the cut will affect 190 of Israel’s socioeconomically weakest authorities which rely on the balancing budget to function.“This hurts the weakest municipalities most of all, the peripheral towns and communities, all the authorities with residents who vote for this government. If you make the cut from a city with large reserves it makes no difference, but here we are talking about authorities that cannot balance their budget without this money,” Bibas explained.“The truly weak authorities get cut in order to finance coalition deals. It’s a sad joke. We see hundreds of millions of shekels flying around on coalition agreements.”The Finance Ministry disagreed with Bibas’s evaluation of the amount to be cut. A representative of the Ministry told the Post that the cut will amount to only NIS 37.7 Million which translate to NIS 189,000 average cut per authority.This however does not entirely add up, as the cabinet’s proposed cut alone states that municipal authorities are to be cut by more than NIS 44 million.Additionally, the Finance Ministry stated on Tuesday as a response to the strike threat that the budgets of the municipal authorities have actually increased due to the ministry’s development plans for the periphery.“This is nonsense, you can’t tell an authority that you are giving it money to build a new high-tech zone while you take away money that’s used for basic municipal services and infrastructures. This is why this fight and this strike are so important,” Bibas told the Post.