Foreign workers concerned about their relatives and their country after earthquake. 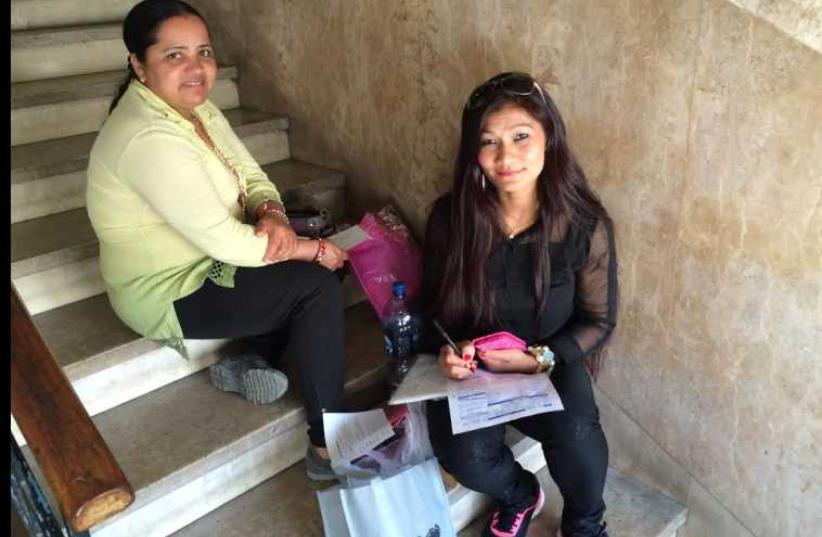 Bisnu (L) and Shova (R) wait outside the Kav LaOved Worker's Hotline headquarters in Tel Aviv, with concerns about their home country of Nepal on their mind
(photo credit: Lahav Harkov)
Advertisement
Dr. Shree Krishna Kashichwa boarded a plane from Israel to his home country of Nepal Monday with a sense of purpose mixed with sadness.Kashichwa, who is in the second year of his residency in the orthopedic department of Hadassah University Medical Center, hails from Bhaktapur, near Kathmandu. He joined an IDF medical team to provide aid to the Nepalese following the country’s worst earthquake in 80 years, which has killed thousands.The doctor successfully made contact with his family – albeit briefly, because of poor phone reception – and made sure they are alive and safe.Though his relatives were accounted for, their home was destroyed, and they did not have access to food, clean water or electricity when he spoke to them. They were staying in a tent.“I want to see them with my own eyes. Maybe I’ll meet them during my trip,” he said hopefully, explaining: “I’m going where [the medical team] goes, to set up a hospital in Kathmandu, which is not so far from my birthplace.”Kashichwa said he is sad about the disaster and concerned about the conditions in which the survivors are living, but expressed pride that he will be able to provide medical care.“I’m going to help the people of Nepal, my people,” he said, already aboard the plane.Meanwhile, on Monday afternoon, about 20 people, including several caregivers from Nepal, waited at the Tel Aviv offices of Kav La’oved-Workers’ Hotline, which seeks to protect the rights of disadvantaged workers in Israel, regardless of where they are from, through legal aid, advocacy, outreach and more.Susmita, a woman in her 30s who has been caring for a man in Herzliya for six years, stood in the stairwell outside the office, speaking on her cellphone with her family – parents, siblings and nieces and nephews – with tears in her eyes.“This is my second time talking to them, but last time I couldn’t hear anything [because of the bad reception],” she explained, adding that her family lives near Kathmandu.“They’re fine, but they don’t have a house anymore and they don’t know what to do. And now it’s raining.”“My heart can’t bear this,” she added.Susmita said her family told her not to worry, but she was wracked by concerns in the days following the disaster and could not sleep or eat.“I’m here because I haven’t gotten paid in a long time, but I want to help them. Now it’s more important than ever to send money to my family,” she explained.Kav La’oved spokeswoman Roni Livneh said that not getting paid is a common problem that workers report to the organization, which provides legal aid to them, first by sending letters to the manpower organizations that employ them, and eventually by filing lawsuits, if necessary.A Kav La’oved study found that foreign workers spend an average of $8,500 in agency fees to get to Israel and to be able to work here, which is often paid by entire families pooling funds and even going into debt. It takes them a year-and-a-half just to recoup the expense before they start earning money.“When there are disasters we hear from a lot of people that they need the money urgently,” Livneh explained.Shova and Bisnu waited for their turn to get help from Kav La’oved, with the disaster in Nepal on their minds, though both came from towns far from the affected area.“I spoke to my family and they’re fine, but I’m still very worried about our country, not just my family,” Shova, who works in the home of an elderly woman in Kfar Saba, explained.Bisnu said a wall of her family’s home collapsed, but that they are safe.“It’s so sad how many people died. I’m worried about my country and everything that was destroyed. There are children out on the street,” she added.