Netanyahu ahead of Trump visit: Israel didn’t occupy Jerusalem, we liberated it

In Saudi Arabia, Trump spoke with Saudi King Salman about the peace process. 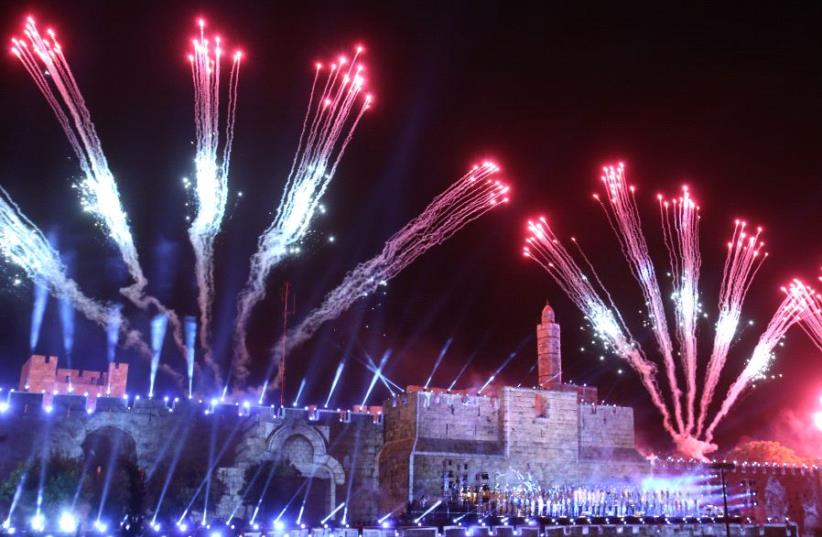 Fireworks over Jerusalem's Old City May 21, 2017
(photo credit: MARC ISRAEL SELLEM)
Advertisement
Israel “didn’t occupy Jerusalem fifty years ago, it liberated it,” Prime Minister Benjamin Netanyahu said on the eve of US President Donald Trump’s historic two-day visit to Israel.“I want to the tell the world in a loud and clear voice: Jerusalem has always been and always will be the capital of Israel,” Netanyahu said at a celebratory event marking the 50th anniversary of the reunification of Israel’s capital city after the Six Day War.“The Temple Mount and the Western Wall will always remain under Israeli sovereignty,” the prime minister added.Netanyahu’s words were seen as a direct message to Trump, following Israel’s disappointment that the president appears to have no plans to announce the relocation of the US Embassy from Tel Aviv to Jerusalem during his two-day trip.Instead, the subject of Jerusalem has become a divisive issue between Israel and the US, ahead of a visit designed to showcase the close ties between the steadfast allies.Trump is the first US president to arrive in Israel so quickly after his inauguration, and he will be the first sitting president to visit the Western Wall.Right before the ceremony, the security cabinet voted for a package of goodwill economic and development gestures to the Palestinians, including legalized building in Area C of the West Bank.Eight ministers supported the measure, while two Bayit Yehudi ministers, Naftali Bennett and Ayelet Shaked, objected to Palestinian building in Area C, fearing it means the land would not be part of Israel’s borders in a future final-status agreement.The measures included the establishment of an industrial zone near Tarkumiya and the easing of restrictions at the Allenby Bridge border crossing.Israel will be the second country, after Saudi Arabia, that Trump is visiting on his first foreign trip as president.He will meet with Netanyahu in Jerusalem on Monday, and with Palestinian Authority President Mahmoud Abbas in Bethlehem on Tuesday, as part of his efforts to restart the peace process after a three-year freeze.Netanyahu said on Sunday night that he looks forward to warmly welcoming Trump, who he called a “true friend of the State of Israel.”He noted that US Ambassador to Israel David Friedman was in the audience, and that this was the first time that an American ambassador had come to an event celebrating the unification of Jerusalem.Security issues, including Iran, ISIS and Syria, are expected to be high on the agenda for the Trump-Netanyahu talks. But the discourse around the visit has focused on the Israeli-Palestinian conflict, and Netanyahu devoted the bulk of his speech Sunday night to the issue of Jerusalem.“We do not need to explain our presence in Jerusalem, and we owe no one an apology for being here,” Netanyahu said, adding that attempts to sever the Jewish people from Jerusalem were “disgraceful.”He did not mention the issue of Judea and Samaria, even though US officials have said that Trump is likely to ask him to acknowledge that Israel must restrain construction in the West Bank settlements.Earlier in the evening, Friedman also attended a private event marking the city’s unification, where he sat at the head table flanked by Samaria Regional Council head Yossi Dagan and former Arkansas governor Mike Huckabee. The latter is the father of White House deputy press secretary Sarah Huckabee Sanders. He joked that so many parliamentarians were present he wondered if it constituted a Knesset quorum.“The city of Jerusalem can no more be divided and separated than could the baby before Solomon with the sword in his hand and people asking which side of the baby shall the mothers’ take,” Huckabee said. “Jerusalem is one city. It is the capital of one people, and this week we all celebrate that extraordinary and amazing act of God.”Also attending the event was Deputy Foreign Minister Tzipi Hotovely, who said, “Jerusalem is the heart of our existence. With all respect to the Start-Up Nation, we have a spiritual role. Everyone is asking are they [the US] going to relocate the embassy. We would like to see all our embassies in Jerusalem.”Hotovely also focused on the issue of the West Bank settlements, noting that she believes Trump has a different attitude that his predecessor.“This administration said, for the first time, that settlements are not an obstacle to peace,” said Hotovely, adding that she feels “the achievement of having a real friend in the White House” would be increased settlement building.Hotovely spoke against the possibility of a two-state solution with the Palestinians, saying that there is a reason all past efforts have failed.“This government believes that the people of Israel and the Palestinians can live together, but not in the paradigm of a Palestinian state,” she said. “We definitely are not going to divide Jerusalem, ever. Hopefully we will see a lot of embassies in Jerusalem this year.”In Saudi Arabia, Trump spoke with Saudi King Salman about the peace process.Saudi Foreign Minister Adel Al-Jubeir told reporters he is optimistic about the peace process, saying, “President Trump, with a new approach and determination, can bring a conclusion to this long conflict. He certainly has the vision and we believe he has the strength and the decisiveness, and the Kingdom of Saudi Arabia stands prepared to work with the United States in order to bring about peace between Israelis and Palestinians and Israelis and Arabs.”