In April, shortly before the elections for Knesset on April 9, Netanyahu vowed to annex territories in the West Bank in an interview with Channel 12. 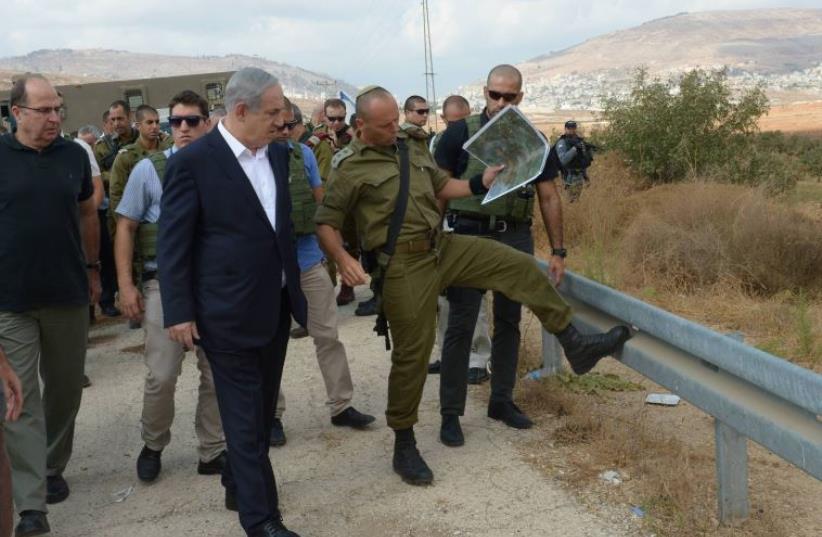 Prime Minister Benjamin Netanyahu and Defense Minister Moshe Ya'alon on tour of West Bank
(photo credit: AMOS BEN-GERSHOM/GPO)
Advertisement
Hitting back at a letter of former Israeli security officials asking him not to annex the West Bank, Prime Minister Benjamin Netanyahu said that “The region in Judea and Samaria is not just a guarantee for Israel’s security, it’s also the inheritance of our ancestors.”

“The same ‘experts’ supported the nuclear agreement with Iran and warned: ‘Bibi is making a mistake in navigation and is destroying the alliance with the US,’” Netanyahu wrote on Twitter.Commanders for Israel’s Security (CIS) is a non-partisan movement consisting of former officials from the IDF, Shin Bet (Israel security agency), Mossad and Israel Police. The movement sent a letter to Netanyahu, writing that it is “united in the conviction that a two-state agreement with the Palestinians, as part of a regional security framework, is essential for Israel’s security, as well as for its future as the democratic home of the Jewish people.”The letter to Netanyahu was signed by hundreds of former security officials and warned that annexing the West Bank without an agreement between Israel and the Palestinians would endanger the security of the State of Israel.“Just as we promised to stand by you as you take steps to separate from the Palestinians while continuing to control the security [situation] until an agreement is reached,” the letter stated, “so too we pledge to stand with you, shoulder to shoulder, against advocates of annexation whose ideological fervor shadows the clarity of their view of the severity of the consequences.”The letter stressed that, as officials who have spent years in the field fighting against the enemy and terrorism, “each of us shares the view that the application of the law in Judea and Samaria – in whole or in part – outside the framework of an agreement, will trigger a chain reaction that will seriously damage Israel’s economy, its regional and international standing, but mainly the state’s security.”CIS warned that imposing sovereignty over a certain area will necessarily end up in a situation in which the entirety of the West Bank is annexed, including the millions of Palestinian residents who live there.“A decision by the Knesset to pass legislation for annexation, however partial, can only be interpreted in the territories, the region and the world as a national decision to slam the door on any future arrangement,” the officials claimed.“It is not possible to assess whether the Palestinian response to the collapse of hope for an agreement will be violent.”The officials stressed that those responsible for Israel’s security, including Netanyahu, need to weigh the possibility that the PA could end security cooperation and that the PA leadership could be paralyzed. This could create a security vacuum allowing armed elements and terrorists, including Hamas, to take over.Such a situation would force the deployment of the IDF and Shin Bet to areas which are currently under PA control, the letter claimed. Israel would then have to control another 2.6 million Palestinians.This would inevitably lead to a flare-up in the south of the country, which could necessitate a military takeover of the Gaza Strip, leading to control over another two million or so Palestinians.This series of events would “seriously harm the IDF’s preparedness to deal with challenges from the main threats in the area,” according to the letter. The security consequences of such a situation could even harm the strategic depth of Israel in the entire region.The letter also mentioned the destructive economic implications of the withdrawal of donor countries and the fact that the burden of funding some five million Palestinians would fall on the state budget and on every family in Israel. The moral implications and other considerations would also impact Israeli society, and the “Palestinian struggle for self-determination could become a struggle for equal rights within the State of Israel, and all this would occur without an exit strategy.”The former officials who signed CIS’s letter stressed that they do not underestimate the opinion of those who disagree with them, even though such people are a “small minority among former senior members of the security establishment. However, the undersigned are united in their assessment that this is an unprecedented step in its destructive implications for Israel’s security.”In April, shortly before the elections for Knesset on April 9, Netanyahu vowed to annex territories in the West Bank in an interview with Channel 12.Gil Hoffman contributed to this report.
Advertisement
Subscribe for our daily newsletter