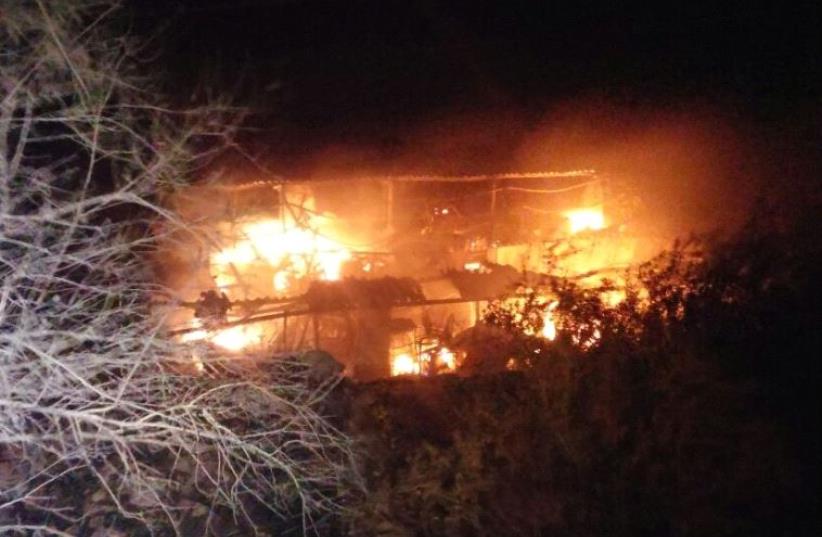 Bet Meir fires
(photo credit: COURTESY ISRAEL POLICE)
Advertisement
Israel continued to battle fires in different parts of the country on Friday, with outbreaks reported in Beit Meir and Maale Hahamisha in the Jerusalem hills, near Kiryat Gat in the South of the country, next to Harashim in the Galilee, and across the wider Haifa region.In addition to the countries to respond to calls for help on Thursday, the US, Egypt, Jordan and Azerbaijan have committed to sending help in combating the flames: Azerbaijan has dispatched a fire plane, Egypt two helicopters, and Jordan fire trucks and crews. In addition to the Super Tanker that arrived to Israel Friday evening, the US sent 50 firefighters to Israel.
Fires rage across Israel. Video: Ariel Kedem, National Parks Authority.
Prime Minister Benjamin Netanyahu toured burned buildings in Haifa and met with fire crews. 75,000 evacuated residents were permitted to return home Friday afternoon.Hundreds of Haifa residents are still without electricity. Israel Electric Company announced that 700 households are without electricity and that they have 16 groups, 60 employees in total, on the ground working to restore power to the effected areas.Netanyahu then traveled to Hazor air base, where he met a Greek pilot who has been working since Thursday to extinguish fires. Taking the microphone, the pilot had some warm words for Israelis, saying: "We are your friends, and we will always be here for you."Firefighter spokesman for National Fire and Rescue Service, Yoram Levi told the Post that he remains cautiously optimistic. "Today is much less dangerous than yesterday, I thought it would be worse, but it is not as problematic as yesterday," Levi said, adding that they are still in an emergency situation. Levi added that the firefighters are "very tired" and have been placed on shifts of 24 hours on 24 hours off. This differs from the usual 24 hours on, 48 hours off, work schedule. "Of course they are very tired and that is why we are ordered them to rest at home as soon as we got control of the fire in Haifa," Levi said. Netanyahu said the dry weather will continue into next week. The Israel Meteorological Service released a report Friday stating that weather conditions in Israel will remain dangerous and susceptible to wildfires through Tuesday the 29th of November. The severely dry and west-ward winds are expected to continue in the mean time. The public is requested to avoid wildfire areas and report any suspicious behavior. 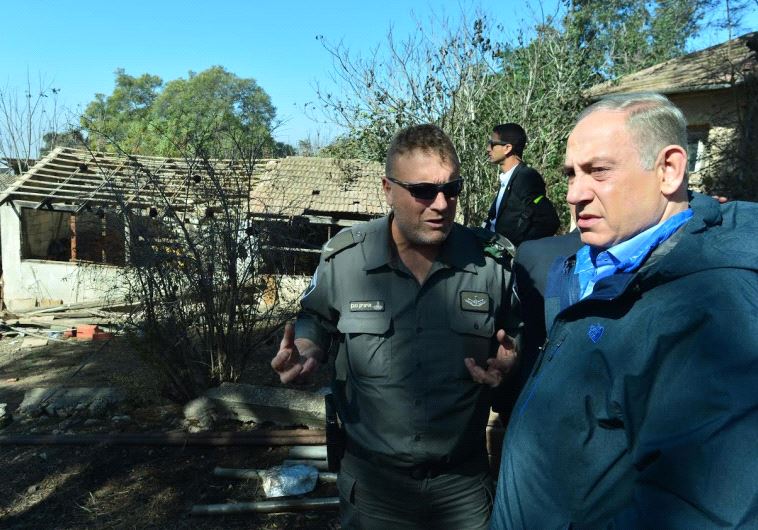 Prime Minister Benjamin Netanyahu visits fire torn Haifa. (Photo credit: KOBI GIDEON/GPO)
A spokesperson of the Haifa Fire Department said on Friday they have evidence that a fire started near the city's main fire depot was an act of arson. Speaking to Channel 2, Uri Chibotaro said video evidence proved the cause of the blaze.
Moshe Kahlon (Kulanu) said to Israel Radio that the Haifa firestorm, which caused widespread damage on Thursday, was an "intentional act of arson."
Earlier, Minister of Public Security Gilad Erdan (Likud) said that the results of an investigation into Thursday's fire in Zichron Ya'acov concluded that the blaze was caused by arsonists.
Police reported that in total 12 individuals had been investigated for arson and incitement as a result of their investigations. Erdan added later that this number had since increased beyond 13.

New firesAt 06:25 Friday morning Jerusalem Police reported that the Beit Meir fire was a result of arson, and all three suspects being sought by Police had been arrested by 09:00. Residents were evacuated from their homes, and some were destroyed before the blaze was brought under control.
Shortly after, Israel Police closed roads and rail lines North of Kiryat Gat in the South of the country, after two fires broke out close to Route 6, the main North-South highway. Traffic is now back to normal in the area.Shortly before 10:00, police and firefighters were called to a blaze near the town of Harashim in the Galilee. With the flames approaching the southern areas of the community, residents were evacuated as emergency crews continue to try and bring the fire under control.
At around 10:15 firefighters were confirmed to be battling a fire in a forested area near the Carmel Government Hospital in Haifa. Channel 2 reported that the teams did not expect the flames to become unmanageable, and that the hospital was not in immediate danger. A number of other fires were reported in the Haifa area.Channel 10 reported that apartments had caught fire in Ramat Eshkol in Jerusalem, however the circumstances surrounding that fire were not immediately known.Friday afternoon firefighters confirmed that a fire broke out in the vicinity of Maale Hahamisha, just north of Abu Gosh west of Jerusalem. According to the Jerusalem fire department the fire was large and headed in the direction of Nataf, which had been evacuated.  As of Friday evening the fire was reportedly under control and major fires had subsided. There was damage to one home in Nataf and one restaurant. Residents of Nataf have not yet been allowed to return to their homes and major access roads to the community remain closed to traffic. Palestinian firefighters assisted in the containment efforts.  An additional fire was reported between the Local Arab Council of Zemer and Kibbutz Bahan. Route 5714 has been temporarily closed to traffic. No further information was available. Four firefighting teams were dispatched to a fire in Oranim Forest spreading towards the city of Kfar Oranim, between Modiin and Modiin Illit.Three Palestinians were arrested by police after failing to spark a fire near the settlement of Ariel earlier in the morning, and other arsonists have reportedly been caught in the act in different locations in Jerusalem and the surrounding area.Thursday firestorm
On Thursday night the number of fires dealt with over the course of the three days numbered around 200, with Public Security Minister Gilad Erdan declaring the general situation “under control” late at night.
Magen David Adom said it treated more than 90 people for light smoke inhalation, and transferred them to hospitals, which remained on high alert throughout the day. At least one person was treated for moderate injuries.
There were no deaths or critical injuries, police said.
An estimated 750 hectares (1,850 acres) of forests and rural areas have been destroyed in Zichron Ya’acov, Neveh Shalom, Modi’in, Neveh Ilan and Nataf, Keren Kayemeth LeIsrael-Jewish National Fund’s fire-fighting services said.
The Shin Bet (Israel Security Agency) confirmed that it is investigating the fires to determine whether they are the result of arson.
“The Shin Bet along with the police have detained several suspects who were taken in for questioning in connection with possible arson fires that affected multiple places areas across the country,” read a statement released by authorities.
The Palestinian Authority’s Civil Defense service said that the Israeli government had asked for assistance in fighting the fires, and that it had agreed to help for humanitarian reasons.
It had done so as well during the massive fire in the Carmel Forest in 2011.
A number of blazes also broke out in the Palestinian territories near Ramallah and Nablus.
Daniel K. Eisenbud, Anna Ahronheim and Lahav Harkov and Eliyahu Kamisher contributed to this report.
Advertisement
Subscribe for our daily newsletter