Newly appointed Deputy FM tells Borge Brende that there is a consensus in Israel regarding preserving the unity of Jerusalem. 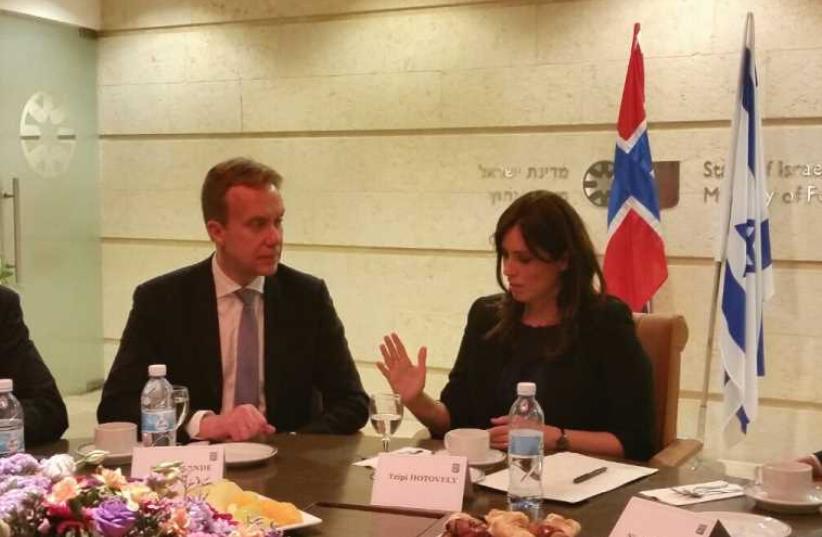 Norway's FM Borge Brende (right) with Deputy FM Hotovely
(photo credit: NOAM SELA)
Advertisement
Israel expects Norway to pressure the Palestinian leadership to recognize Israel as the Jewish national home, newly appointed Deputy Foreign Minister Tzipi Hotovely told visiting Norwegian Foreign Minister Borge Brende on Tuesday.Hotovely, in her first high-level diplomatic meeting since her surprise appointment last Thursday, said it is very important for Israel that Europe and the Norwegian government do not support unilateral Palestinian steps in the international arena.Hotovely, who has come out against a two-state solution, told Brende that a government was established in Israel which “represents a will for dialogue and is opposed to Palestinian unilateral moves.”The deputy foreign minister told her guest Norway needs to understand that there is a consensus in Israel regarding preserving the unity of Jerusalem.“This week the Knesset marked Jerusalem Day and Prime Minister [Benjamin] Netanyahu declared that Jerusalem will remain united,” Hotovely said. “The head of the opposition, [Isaac] Herzog, also agreed to that,” she said.Brende, here to prepare for an Ad Hoc Liaison Committee meeting in Brussels at the end of the month, also met on Tuesday with Netanyahu and Herzog.