US secretary of state said over the weekend that Israel would be more isolated globally if Congress killed Iran nuclear deal. 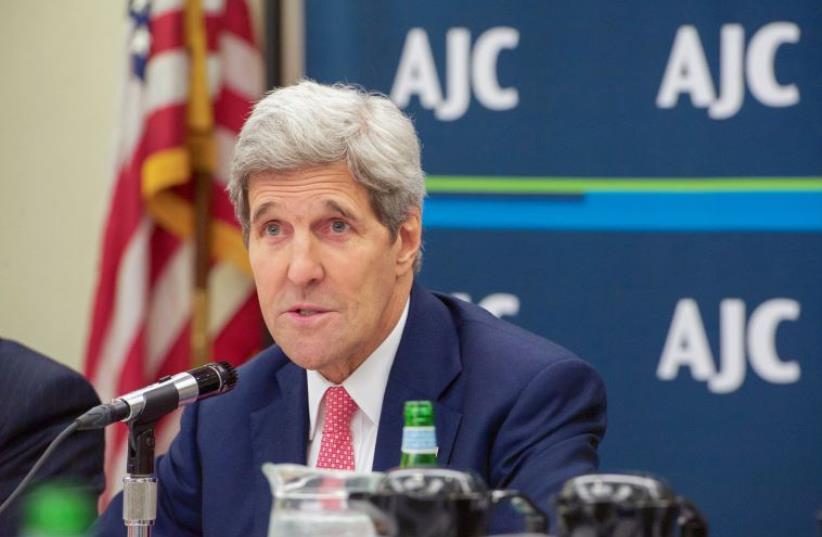 US Secretary of State John Kerry speaks with leaders of the American Jewish Committee
(photo credit: STATE DEPARTMENT)
Advertisement
An Israeli official hit back at US Secretary of State John Kerry over the weekend following remarks that were perceived by the government in Jerusalem as "thinly veiled efforts to muzzle criticism" of the Iran nuclear agreement.Responding to Kerry's contention that Israel would face even more international isolation if Congress strikes down the Iran nuclear deal, the official told The New York Times on Saturday that the government would continue its public lobbying.“We reject the threats directed at Israel in recent days,” the official told the Times.“The US Congress will make its decision based on American interests, which include consideration of US allies,” said the official, who spoke to the Times on condition of anonymity. “The regrettable attempt to intimidate Israel will not prevent us from voicing our concerns about this deal, which poses direct threats to Israel’s security.”The State Department, for its part, rejected Israeli characterizations of Kerry's remarks as threats.“Secretary Kerry issued no threats,” said spokesman John Kirby. “He simply stated a fact: Should the US Congress fail to support the deal, it will fall apart, and so, too, will any international support for further sanctions on Iran and its nuclear program. Iran will thus be able to start rushing its nuclear program forward again.”Kerry said on Friday it would be a huge mistake if Israel decided to take unilateral military action against Iran over its nuclear program in the future.Kerry was asked in an NBC "Today" show interview if the nuclear deal reached last week would make it more likely that Israel might attempt a military or cyber attack on Tehran."That'd be an enormous mistake, a huge mistake with grave consequences for Israel and for the region, and I don't think it's necessary," Kerry said.He warned later on Friday that if Congress failed to approve the deal agreed last week between world powers and Iran to curb Iran's nuclear program then Israel could be worse off. Congress has until Sept. 17 to approve or reject the agreement."I fear that what could happen is if Congress were to overturn it, our friends in Israel could actually wind up being more isolated and more blamed," Kerry told the Council on Foreign Relations think tank in New York."We would lose Europe and China and Russia with respect to whatever military action we might have to take because we will have turned our backs on a very legitimate program that allows us to put their program to the test over these next years," he said.Under the deal agreed in Vienna, US, EU and UN sanctions will be lifted in exchange for long-term curbs on Iran's nuclear program that the West suspected was aimed at creating an atomic bomb, but which Tehran says is peaceful.Reuters contributed to this report.