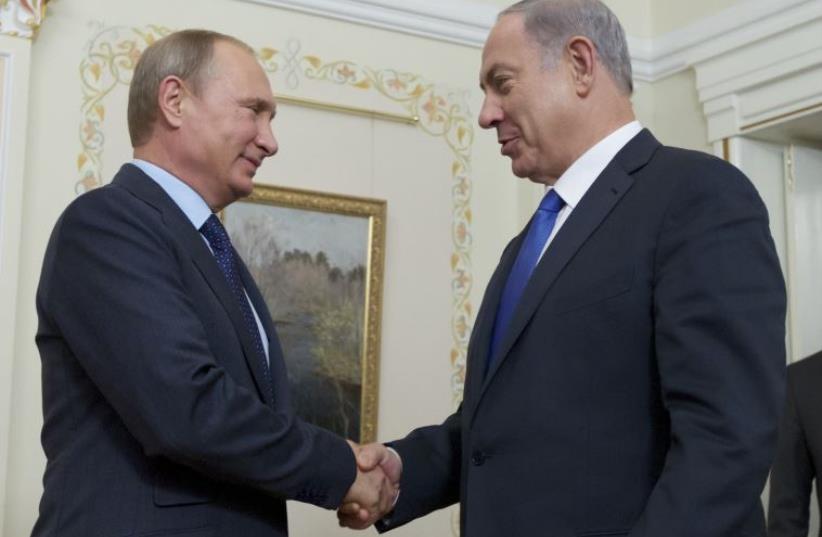 Netanyahu and Putin
(photo credit: IVAN SEKRETAREV / POOL / AFP)
Advertisement
Just two days after Egyptian President Abdel Fattah al-Sisi said Moscow wanted to host talks between Prime Minister Benjamin Netanyahu and Palestinian Authority President Mahmoud Abbas, Netanyahu spoke with Russian President Vladimir Putin on Tuesday about the diplomatic process.The Kremlin issued a brief statement late Tuesday evening about the phone call, saying that Netanyahu initiated it, and that the two leaders “exchanged opinions on issues surrounding the settlement in the Middle East and current aspects of the general situation in the region.”According to the statement, “It was agreed to continue intensive Russian-Israeli contacts at various levels.” The Prime Minister’s Office did not issue any read-out at all about the phone call.Netanyahu and Putin, who have met face-to-face four times in the last year, speak regularly on the phone. Their contacts intensified following Moscow’s military engagement in Syria last September, and much of it has to do with ensuring that Israeli and Russian forces do not accidentally clash in Syria’s skies.In contrast to the four meetings with Putin, Netanyahu has met US President Barack Obama only once during this time period, and they also speak less on the phone. Netanyahu does, however, speak every few days with US Secretary of State John Kerry.Sisi, during a meeting on Sunday with newspaper editors in Cairo, said Putin told him “he is ready to receive [Abbas] and Netanyahu in Moscow to carry out direct talks to find a solution.”He added that he felt that Israel was becoming more convinced of the need for a deal, something he termed “a positive sign.”Russia, which is currently taking a much more muscular role in the Mideast – and is perceived by many as trying to replace the US as the central foreign power in the region – has since 2005 expressed an interest in hosting Israeli-Palestinian talks. With Washington leading the diplomatic process, however, that idea never gained any traction.Asked about holding talks in Moscow, the prime minister’s spokesman, David Keyes, replied that Netanyahu “is ready to meet President Abbas anywhere, anytime for direct peace talks without preconditions.”Unfortunately, Keyes said, “Abbas continues to say ‘no’ and continues to present preconditions for such a meeting.”