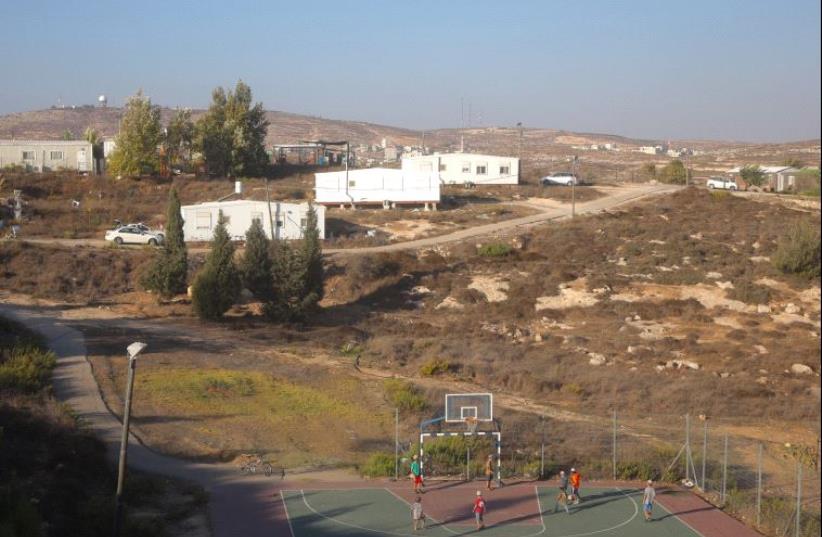 Construction in Amona
(photo credit: MARC ISRAEL SELLEM/THE JERUSALEM POST)
Advertisement
The coalition lived to see another day, with legislation retroactively legalizing nearly 4,000 settlement homes moving forward Monday after intense negotiations.Prime Minister Benjamin Netanyahu and Bayit Yehudi leader Education Minister Naftali Bennett came to agreements regarding the Amona outpost, slated to be demolished on December 25, and the promotion of the settlement bill, which has major implications for thousands of Israeli denizens of the West Bank and the legal status of their homes.Bennett said that "if the bill passes, we can say that the 1977 revolution [in which the Right won its first election] is back, because the nationalist camp is in charge again.
MK Hotovely on legality of settlement resolution and regarding Amona
"This is a historic day in the Knesset, which went from establishing a Palestinian state to Israeli sovereignty in Judea and Samaria. Have no doubt: The settlement bill is leading the way to annexation," Bennett stated.Netanyahu said in a Likud faction that the solution will prevent the demolition of many "Amonas," homes built on private Palestinian land, a matter that bothered him and others to whom settlements are dear."We're finding solutions that didn't exist before today, within the framework of the law, in order to solve this problem," the prime minister said.At the same time, Netanyahu said the timing is diplomatically sensitive, and he asked all coalition MKs to show restraint, "for the good of settlements and the State of Israel."A new version of the bill was approved by the Ministerial Committee for Legislation Monday evening, and brought to a preliminary vote in the plenum hours later, where it passed 60-49 following a debate peppered with non-stop shouting from the coalition.The settlement bill applies to the nearly 4,000 settlement homes on private Palestinian land that were built with some kind of support from the state, such as connections to infrastructure and utilities. It would allow the state to pay anyone with proof of ownership for use of the land, rather than demolish the homes built on it.Mandelblit still maintains the bill is unconstitutional, but would agree to ask the Supreme Court for only a 30-day postponement of Amona’s demolition – a condition Bennett set for accepting the deal – if the “Amona article” was removed.The previous version of the bill had already passed a preliminary reading, but Knesset regulations precluded the draft that had been prepared for a first reading to be amended again, and therefore, the coalition started the legislative process all over again on Monday.It is expected to go to a first reading on Wednesday, and then return to the special committee on the bill, which has to be officially reestablished after the preliminary reading because the process was restarted.MK Tzipi Livni (Zionist Union) said the bill is motivated by Bayit Yehudi’s goal to annex the West Bank.“Israeli citizens want a government that cares about all of them, but that’s not what’s happening,” she said at a Zionist Union faction meeting. “Anyone who says we can annex the land without the Palestinians is lying.”Joint List chairman Ayman Odeh suggested that Netanyahu start preparing his lawyers, vowing that Palestinians will go to the International Criminal Court in The Hague.“The settlement bill is an injustice, but even worse than that is the occupation. This bill will prevent the establishment of a Palestinian state,” Odeh stated.The agreement on the future of Amona involves postponing the outpost’s demolition by 30 days after the planned December 25 date, at which point they would be moved to the northern side of the hilltop on which they currently reside. That area is what’s considered “abandoned land,” meaning that it is not public land, but its owners have not claimed it.Mandelblit has said the solution could be valid for only eight months, and then residents would have to move again.However, coalition members hope to pass the settlement bill before Amona is demolished – hence the need for a postponement – and then have it apply to the land to which the residents would be moved.Joint List MK Osama Sa’adi said he knows the Palestinian owners of the abandoned land on the northern side of the hill, and they intend to petition the High Court.