Jordan, the Palestinian Authority and other Arab allies have warned the White House of severe repercussions should it proceed with the move. 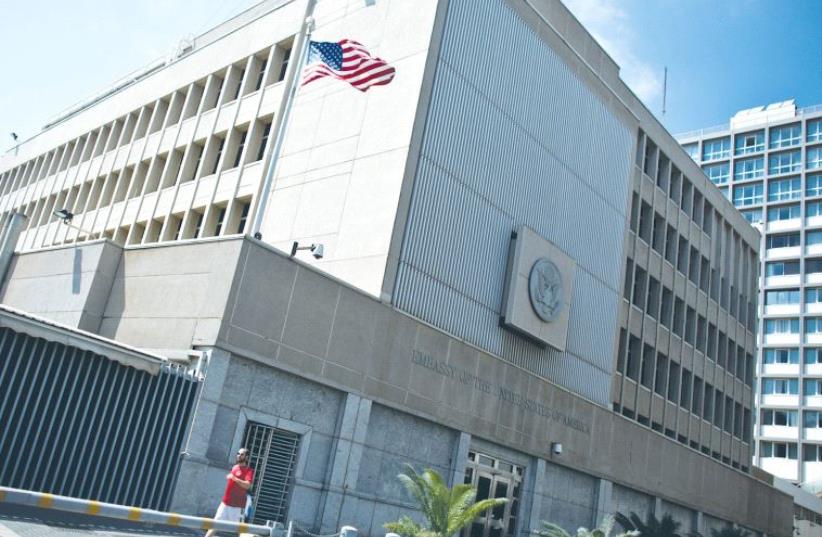 The US embassy in Tel Aviv
(photo credit: REUTERS)
Advertisement
WASHINGTON -- Once committed to quickly moving America's embassy in Israel from Tel Aviv to Jerusalem, the Trump administration is now expressing caution, promising only to review the matter extensively and in consultation with "stakeholders" in the conflict.That deliberative process tracks closely with the policy evolutions of two prior presidents, Barack Obama and George W. Bush, who also campaigned on a pledge to move the embassy. Both ultimately reversed course while in their first terms office. "If it were already a decision, then we wouldn't be going through a process," Sean Spicer, the new White House press secretary, said in his first press briefing on Monday. He declined to commit the administration to moving the embassy by the end of Trump's term, four years from now. "His team is going to continue to consult with stakeholders as we get there."Jordan, the Palestinian Authority and other Arab allies have warned the White House of severe repercussions should it proceed with the move, including a review of bilateral relations with both the US and Israel. Arab states have also warned of an upsurge in violence should the embassy be relocated.Trump's campaign promise was unflinching: "We will move the American embassy to the eternal capital of the Jewish people, Jerusalem," Trump told the American Israel Public Affairs Committee in March. He repeated that commitment at several subsequent campaign events.
Donald Trump at AIPAC conference in March 2016: Will veto anti-Israel moves at UN, move US embassy to Jerusalem
"The Palestinians must come to the table knowing that the bond between the United States and Israel is absolutely, totally unbreakable," he said.In readouts from the prime minister's office and the White House on Sunday, neither said that a phone call between President Donald Trump and Prime Minister Benjamin Netanyahu made any mention of the embassy relocation.By delaying the move, the White House buys itself time to weigh how such a move would adversely impact its coalition against Islamic extremists and its plans for a Middle East peace initiative, to be led by the president's adviser and son-in-law, Jared Kushner. It also suggests the administration is mindful of the impact such a dramatic act would have on the politics of the world's most tumultuous region."We're at the very early stages of that decision-making process," Spicer said.