UK’s May slams Kerry for focus on settlements

The comments came less than a week after the UK voted in favor of UN Security Council Resolution 2334 condemning Israel for settlement activity. 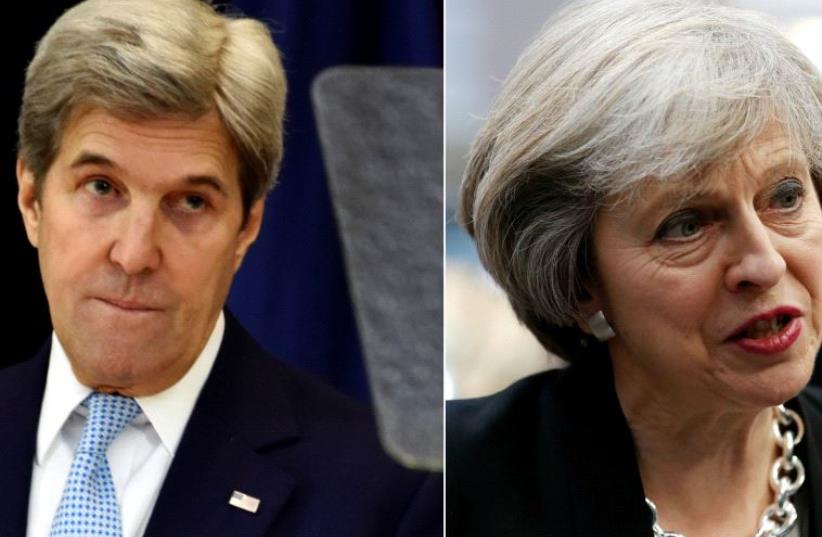 Theresa May and John Kerry
(photo credit: REUTERS)
Advertisement
UK Prime Minister Theresa May came out against US Secretary of State John Kerry’s address criticizing Israel, with a spokesman saying Thursday that disproportionately focusing on settlements and criticizing the composition of the Israeli government is not a constructive way to work towards solving the Israeli-Palestinian conflict.“We do not believe that the way to negotiate peace is by focusing on only one issue, in this case the construction of settlements, when clearly the conflict between the Israelis and the Palestinians is so deeply complex,” the spokesman said.Kerry said “settlements” or “settlers” 62 times in his 72-minute speech Wednesday, and “terror” or “terrorism” 14 times. As reflected by those numbers, the focus of the address was on communities beyond the 1949 armistice line and their expansion, which he said was a major obstacle to peace. Israel can only be Jewish and democratic if there is a two-state solution, Kerry posited, and a two-state solution is not possible if any new homes are constructed beyond those lines.
John Kerry lays out Mideast peace vision
The US Secretary of State also called the coalition “the most right-wing in Israel history, with an agenda driven by the most extreme elements…more committed to settlements than any in Israel’s history…leading towards one state.”On that, May’s spokesman commented: “We do not believe that it is appropriate to attack the composition of the democratically-elected government of an ally.”The UK government believes negotiations must take place between Israel and the Palestinians, with backing from the international community, the spokesman added.The comments came less than a week after the UK voted in favor of UN Security Council Resolution 2334 condemning Israel for settlement activity, the first resolution critical of Israel not vetoed by the US since 2009.May’s spokesman defended the vote for resolution 2334 by saying the UK government “continue[s] to believe that the construction of settlements in the Occupied Palestinian Territories is illegal.“But we are also clear that the settlements are far from the only problem in this conflict. In particular, the people of Israel deserve to live free from the threat of terrorism, with which they have had to cope for too long.”Jerusalem expressed outrage at the resolution, pointing out that its parameters call Israel’s presence at the Western Wall a war crime.Prime Minister Benjamin Netanyahu, who also holds the foreign affairs portfolio, had ministers cancel planned meetings with officials from any of the countries involved with the resolution with which Israel has diplomatic relations, and ambassadors from those countries were summoned for censure. Contrary to what was broadly reported, the Prime Minister’s Office said it did not cancel a meeting with May following the UNSC vote.Earlier in December, May praised Israel as a “thriving democracy, beacon of tolerance, an engine of enterprise and an example to the rest of the world for overcoming adversity and defying disadvantages,” in a speech to the Conservative Friends of Israel.