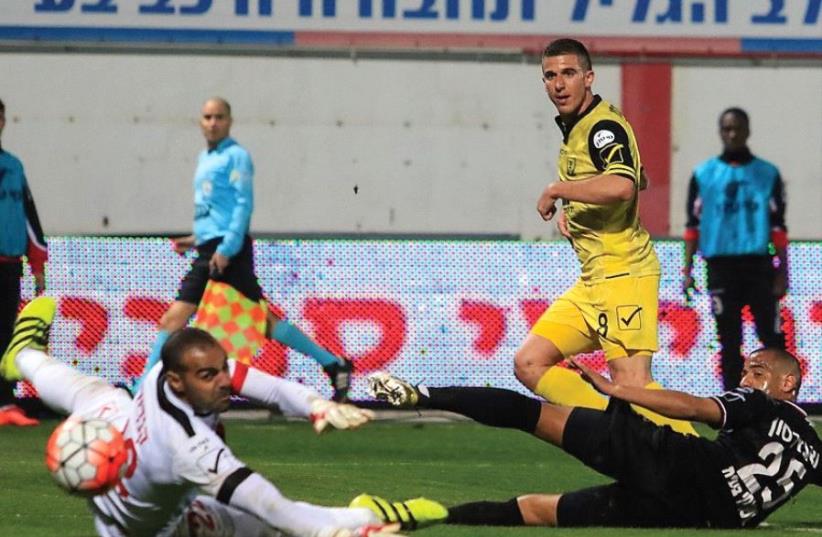 Beitar Jerusal em midfielder Idan Vered scores his team’s second goal in last night’s 2-0 win over Bnei Sakhnin by firing his shot between goalkeeper Mahmud Kandil (left) and defender Wanderson.
(photo credit: ERAN LUF)
Advertisement
Beitar Jerusalem extended its perfect record under coach Sharon Mimer on Sunday night, continuing its impressive form with a 2-0 victory at bitter rival Bnei Sakhnin.With both clubs agreeing that away fans will no longer attend the showdowns between the sides, the fiery atmosphere that used to accompany their clashes was notably absent at Doha Stadium.Beitar didn’t seem to miss it one bit, scoring both of its goals in a dominant first half, registering its fourth win in four matches over all competitions since Mimer replaced Ran Ben-Shimon. Jerusalem’s longest league winning streak under Ben-Shimon was two matches, but it already made it three victories in a row with the triumph in Sakhnin, officially securing its place in the top-six championship playoffs with two regular season games to play.Beitar strengthened its hold on fourth place, moving five points clear of Sakhnin in fifth, while sitting five points back of Maccabi Petah Tikva in third.Beitar will look to continue the momentum by advancing to the State Cup semifinals on Wednesday, taking a 2-0 lead into the second leg at Ironi Kiryat Shmona.Itay Shechter continued his sensational form for Beitar on Sunday, scoring one goal and setting up another. Shechter found the back of the net for the fourth time in the past five matches in the 30th minute, finishing off a move he began with an unstoppable header into the top left corner. Idan Vered provided the assist for Shechter’s goal and the striker returned the favor in first-half stoppage time, finding Vered with a superb pass before the latter provided a composed finish.Vered’s goal with the last kick of the first half allowed Beitar to relax in the second half, with Sakhnin never even coming close to mounting a comeback.“We set ourselves the goal of qualifying the playoffs tonight and I’m happy we achieved that,” said Mimer. “The secret for me is that the team is playing with a different energy. It is important for me that the players will enjoy themselves on the field, creating scoring chances and scoring as many goals as possible.”Earlier Sunday, Maccabi Petah Tikva maintained its hold on third place, beating Hapoel Haifa 2-1. Guy Melamed’s sixth-minute opener was canceled out by Hanan Maman five minutes into the second half, but Giddy Kanyuk put Petah Tikva back in front in the 68th minute and Romario Pires secured the victory from the penalty spot with the last kick of the match.“We didn’t play a very good match today but our character won us the game,” said Petah Tikva coach Kobi Refua.“At these stages of the season the team’s character makes the difference and I’m really proud of my players.”On Monday, Hapoel Beersheba looks to reestablish a three-point gap at the top of the standings when it hosts Hapoel Kfar Saba. Maccabi Tel Aviv trailed the reigning champion by 10 points earlier this season, but moved tied on points with Beersheba by beating Bnei Yehuda 2-0 on Saturday.