Perhaps simply too many sympathize with the insurgency. 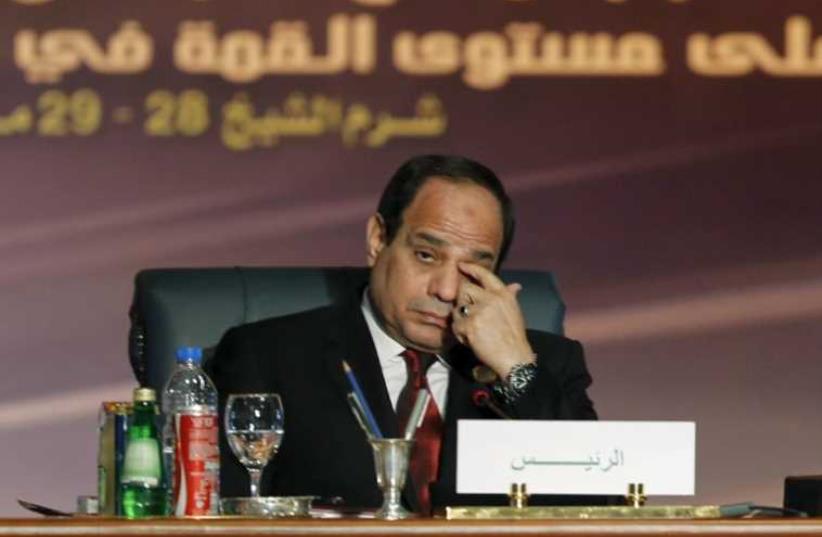 Egyptian President Abdel Fattah al-Sisi.
(photo credit: AMR ABDALLAH DALSH / REUTERS)
Advertisement
The Egyptian government led by Abdel Fattah al-Sisi seems to be unable to deal with the growing, non-stop Islamist insurgency on its territory.Almost every day there are reports of army operations against Sinai-based terrorists and/or terrorist attacks against security personnel, government structures or civilian targets.On Tuesday, assailants shot and killed a policeman and wounded two others in Qalyubia Governorate, in the Nile Delta, on Monday, gunmen shot a soldier in Sinai, Aswat Masriya reported, citing Egypt’s state news agency MENA.On Sunday, two bomb attacks targeting security forces in Sinai killed at least 13 people and wounded dozens. A Twitter feed that describes itself as the official account for Sinai Province, a terrorist group that changed its name from Ansar Beit al-Maqdis and pledged allegiance to Islamic State in November, claimed responsibility for the attack.North Sinai is the center of an insurgency that has killed hundreds of members of the security services since mid-2013, when then-army chief Sisi ousted Islamist president Mohamed Morsi. Sisi was overwhelmingly elected president last year.The regional chaos, and particularly the civil war raging next door in Libya, add fuel to the flames of an insurgency that the Egyptian security forces are unqualified to deal with.The army has carried out massive operations against terrorists in Sinai, started building a buffer with the Gaza Strip, and led a harsh crackdown on the Muslim Brotherhood and its supporters nationwide. But none of this has proven effective in ending the almost daily attacks.Perhaps the security forces are simply incapable of dealing with a problem of this magnitude, in part because too many Egyptians sympathize with the insurgency.In a nation of around 80 million, and with a significant proportion of them supporting either the Muslim Brotherhood or more radical Islamists, there are millions of potential supporters or financiers of terrorism, or even outright jihadists.“The Sinai insurgency isn’t a new phenomenon – it precedes Morsi’s ouster, and of course precedes the 2011 uprising [that overthrew Hosni Mubarak] as well,” Eric Trager, an expert on Egypt and a fellow at the Washington Institute for Near East Policy, told The Jerusalem Post on Tuesday.“It has escalated due to regional trends, such as the rise of Islamic State, as well as because insurgent groups within Sinai enjoyed more hospitable conditions under the Muslim Brotherhood, and are now battling the return of the security state,” he continued.Shadi Hamid, author of Temptations of Power: Islamists and Illiberal Democracy in a New Middle East, and a fellow at the Brookings Institution’s Center for Middle East Policy, told the Post that this is a government that is supposed to be good at one thing: stability and security.However, he said, “the events of recent months demonstrate quite the opposite. The Sinai insurgency and the terrorist threat more generally are only getting worse.“For the Sisi regime, any Islamist who opposes the regime is a potential terrorist, and counterterrorism, at its most basic, depends on actually being able to identify who the terrorists are,” explained Hamid.So in terms of methods, “the Sisi regime has approached the Sinai through a narrow security lens, neglecting the political and economic factors that exacerbate extremism.”“When all you have is hammer – and that’s all Sisi seems to have – everything is a nail,” continued Hamid.“In short, this is a government that doesn’t do counterterrorism or counterinsurgency well, despite US and Israeli hopes to the contrary,” he said, adding that more worryingly, it appears that Sisi and the military are “incapable” of dealing with the situation.Yoram Meital, chairman of the Chaim Herzog Center for Middle East Studies and Diplomacy at Ben-Gurion University of the Negev in Beersheba, told the Post that the violence in Sinai is significantly escalating in terms of numbers of casualties to both the military and the insurgents. It is estimated that there are several thousand Islamist gunmen in the peninsula, he said.The Egyptian army “is not even close” to putting an end to the attacks, he said.“From the government’s perspective, the confrontation is being nourished from two other areas – Gaza and Libya,” he continued.Another trend over the past couple of years, noted Meital, is the increasing number of terrorist attacks in areas outside of Sinai, including in Cairo.“The bottom line for Egypt’s government is that the Islamist insurgency is the most threatening national security issue facing the country,” he added.Sisi’s presidential campaign presented him as the security candidate, “yet it turns out that he cannot eradicate the wave of terrorism,” Meital continued.Moreover, his regime blames the Muslim Brotherhood for playing a part in escalating the violence in Sinai, which has resulted in a broadening of the state’s struggle against the group and in deepening rifts in Egyptian society, he concluded.Reuters contributed to this report.