According to a Hamas member, Suleimani urged Hamas's delegation to stay neutral in the Saudi-Iranian conflict so that will not suffer the consequences of aligning with one side later. 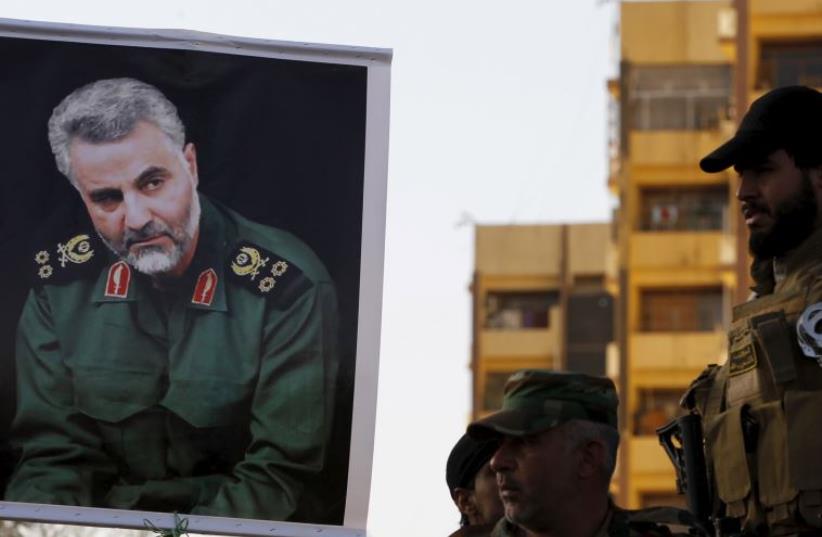 Qassem Suleimani, the commander of the Iranian Revolutionary Guard's Quds Force
(photo credit: REUTERS)
Advertisement
General Qassem Suleimani, the commander of the Iranian Revolutionary Guard's Quds Force, reaffirmed Iran's commitment to the Palestinian resistance in a secret meeting with Hamas's delegation to Iran on Wednesday, al-Mayadeen Arab news site reported.The Palestinian delegation, headed by the chairman of Hamas's political bureau, Musa Abu Marzouk, met secretly with senior Iranian figures, including the secretary of the Iranian Supreme National Security Council, Ali Shamkhani, Shura Council Chairman Ali Larijani and Qassem Suleimani. "During the meeting, the senior Iranian officials updated Hamas's delegation about the expected developments in the region,” a member of the Hamas delegation said."The circumstances under which Hamas's relations with Iran were created before 2011 have changed. The world has changed since the Arab Spring, both Iran and Hamas are not the same. Thus, we need to build our relations on new foundations," he added.According to the Hamas member, Suleimani was greatly offended by Abu Marzouk's remarks criticizing Iran for not aiding the Palestinian resistance. In January, the London-based newspaper Asharq al-Awsat exposed a recording of a private conversation between Abu Marzouk and an unidentified person in which the former blamed Iran for lying about aid to Hamas."Suleimani told Hamas's delegation that Iran was a staunch supporter of the Palestinian resistance before the nuclear deal and it will remain so after the deal. He emphasized that during the negotiations with Western powers, Iran never surrendered to the American pressure to make concessions on the Palestinian issue and refused to even open it to debate," the source within Hamas added.Suleimani strongly rejected the common thesis that Iran supports the Palestinian resistance because it serves its own interests. This thesis is supported by Palestinian Authority President Mahmoud Abbas, who in a TV interview this week claimed that Iran supports the resistance in order to strengthen its presence in the region."The support for the Palestinian resistance is a fundamental ideological issue for us," Suleimani stated. Even though he reaffirmed Iran's staunch support for the resistance, Suleimani surprisingly stated: "We would accept anyone who stands with the Palestinian resistance, and we would not mind if someone else would replace us and support you.“The aid we provide you might dwindle, but only as a result of the economic difficulties we are facing, and not because we have changed our stance toward Palestine," Suleimani added.The Iranian general also called on Hamas to stay neutral in the Saudi-Iranian conflict, explaining that "when our problems with Saudi Arabia will be resolved, those who aligned with this side or another will lose. Your battle is long and you must have the support of all the Islamic World."