A 58-page booklet was created for British jihadis to avoid being detected by police while planning or carrying out terror attacks. 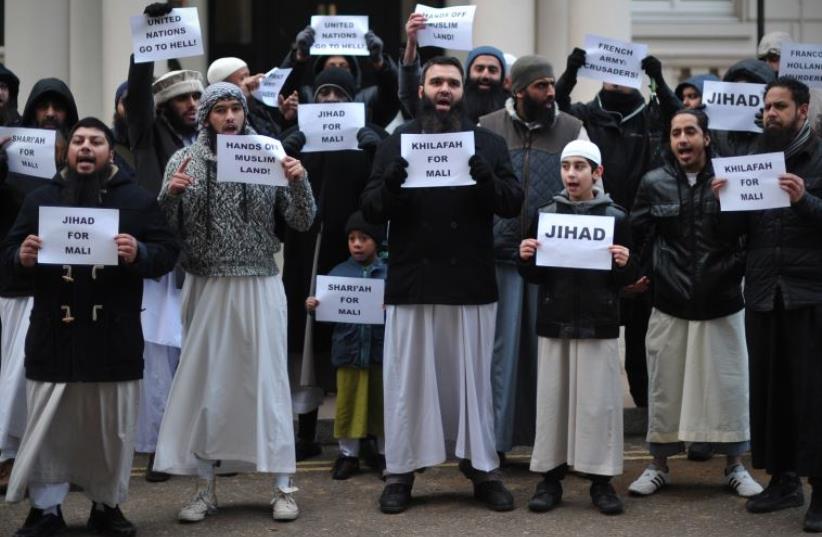 Muslim men and children hold up signs reading "Jihad for Mali", "United Nations go to hell" and calling French President Francois Hollande a "Murderer" as they protest in response to French military action in Mali outside the French embassy in central London on January 12, 2013
(photo credit: CARL COURT/AFP)
Advertisement
Islamic State recently released a handbook for wannabe terrorists in Britain on how to blend in while planning a terror attack in order to avoid being detected by police.According to the report released on Monday in British newspaper The Mirror, the 58-page English-language booklet titled Safety and Security Guidelines for Lone Wolf Mujahideen, was written in Syria was created so "non-Arabic speaking brothers ... may apply it to their blessed operations.""No doubt that today, at the era of the lone wolves, brothers in the West need to know some important things about safety in order to ensure success in their operations," it reads.Among the booklet's advice was to stay clean-shaven and not carry Islamic religious items on them."If you can avoid having a beard, wearing qamis (long tunic), using miswak (a teeth-cleaning twig recommended by Prophet Muhammad) and having a booklet of dhikr (short devotional phrases and prayers) with you, it’s better."The booklet then advised its followers to wear necklaces with a cross --but only those without Arabic names on their passports because "it may look strange.""As you know, Christians - or even atheist Westerners with Christian background - wear crosses on their necklaces."The terror handbook also gave permission for jihadis to wear perfumes and colognes containing alcohol, something usually avoided since Islam prohibits the use and consumption of alcohol. "Don’t use the oily, non-alcoholic perfume that Muslims use, instead use generic alcoholic perfume as everyone does, and if you are a man, use perfume for men."