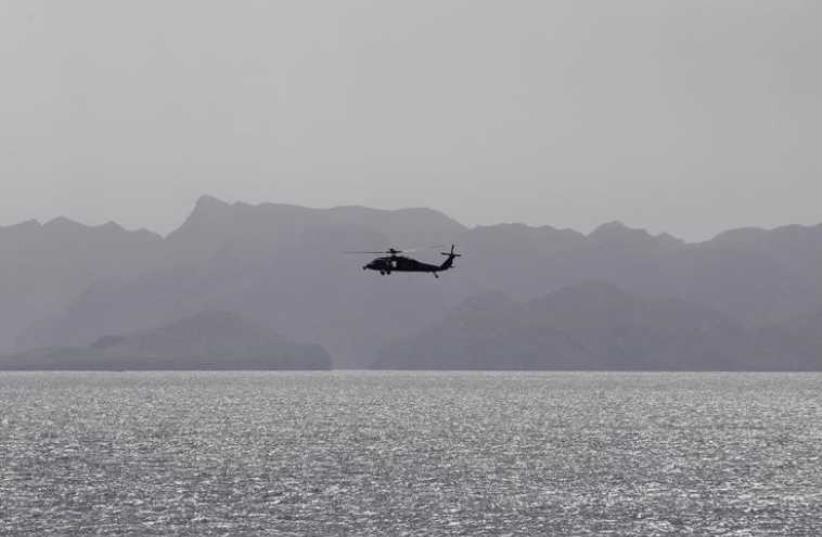 A helicopter from the Nimitz-class aircraft carrier USS Abraham Lincoln (CVN 72) patrols the Persian Gulf during a transit in the Strait of Hormuz
(photo credit: REUTERS)
Advertisement
Iran detained 10 US sailors aboard two U.S. Navy boats in the Gulf on Tuesday in an incident that rattled nerves days ahead of the expected implementation of a landmark nuclear accord with Tehran.Late on Tuesday, a US defense official said plans were in place for Iran to return the sailors to a US Navy vessel in international waters early on Wednesday.Both US and Iranian officials described the sailors, whose boats may have inadvertently drifted into Iranian waters, as safe and well-treated. US defense officials said nine men and one woman were aboard the two vessels seized.White House spokesman Josh Earnest told CNN that "We have received assurances from the Iranians that our sailors are safe and that they will be allowed to continue their journey promptly."Official Iranian news outlets confirmed the detention of the 10 Americans, hours before US President Barack Obama was due to make his final State of the Union address to the US Congress before he leaves office in January 2017."The Revolutionary Guards naval forces seized the American boats two kilometers inside Iranian territorial waters while they were snooping around," Iran's semi-official Fars news agency said.Officials from Iran and the United States were negotiating to free the crew, Fars reported.Washington and Tehran, which have pursued a partial detente in recent years, both appeared eager not to let the incident escalate further.Obama, a Democrat, has made the Iran nuclear accord a centerpiece of his foreign policy, and Republicans vying to succeed him have assailed him over the deal.Iran, meanwhile, is eager for relief from punishing economic sanctions under the landmark nuclear accord it forged with six world powers last July. Formal implementation of the accord could begin in days, following steps Iran agreed to take to curb its nuclear activities.Iranian Foreign Minister Mohammad Javad Zarif assured US Secretary of State John Kerry that the US sailors would be allowed to continue their journey promptly, another US official said.The seizure of the 10 sailors nonetheless underscored the potential for clashes that could derail diplomacy, especially in the Gulf's tense and crowded shipping lanes.Precisely what happened to the two US boats remained unclear.A senior US defense official said the United States had lost contact earlier in the day with two small craft en route from Kuwait to Bahrain.Another US official said mechanical issues may have disabled one of the boats, leading to a situation in which both ships drifted inadvertently into Iranian waters.SAILORS SAID TO BE SAFEIn a statement, Iran's powerful Islamic Revolutionary Guard Corps confirmed it seized the boats and said the sailors were safe and well. It said France's Charles de Gaulle aircraft carrier was near the seized US boats.They were on board two riverine patrol boats, one of the US officials said. Riverine boats are 38-foot long, high-speed patrol boats used by the US Navy and Marines to patrol rivers and littoral waters.Republican officials and presidential candidates, who opposed the Iran nuclear accord, used the incident to criticize Obama."It's just an indication of where the hell we're going. I mean hopefully they get released and fast," businessman Donald Trump, who leads the Republican field in the race for US president, said at a rally in Iowa. The election is Nov. 8.The seizure of the sailors and their craft was the latest reported incident between US and Iranian forces in the Gulf in recent weeks.The US Navy said late last month that an Iranian Revolutionary Guards vessel fired unguided rockets on Dec. 26 near warships including the aircraft carrier USS Harry S Truman in the Strait of Hormuz. Iran denied the vessel had done so.Previous Iranian seizures involved British sailors and marines.In June 2004, Iran arrested six Royal Marines and two naval personnel - part of a US-led force in Iraq - for straying into its waters, stirring diplomatic tensions between the two. Following negotiations the eight were freed three days later.In March 2007, Iranian forces seized 15 British servicemen - eight Royal Navy sailors and seven marines - in the mouth of the Shatt al-Arab waterway that separates Iran and Iraq, triggering a diplomatic crisis at a time of heightened tensions over Tehran's nuclear ambitions. They were held for 13 days.In November 2009, Iranian naval vessels detained five Britons on a racing yacht en route from Bahrain to Dubai. They were released a week later.