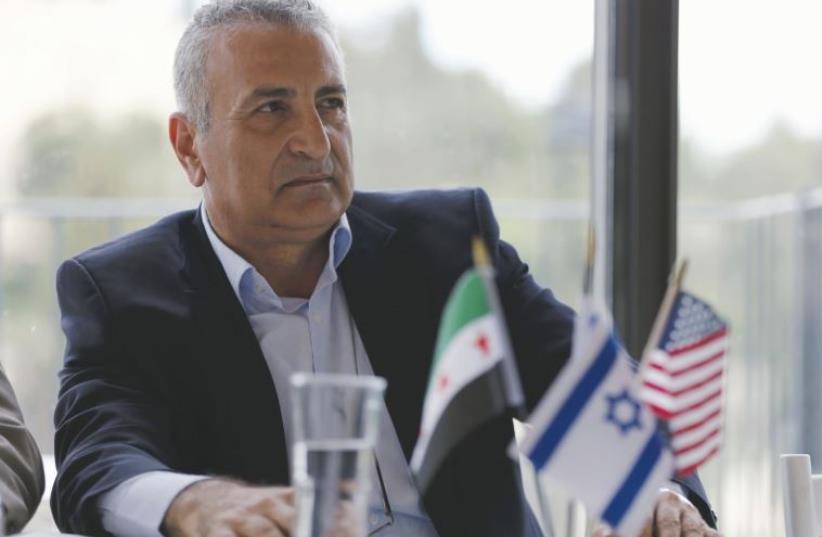 SYRIAN OPPOSITION LEADER Kamal al-Labwani attends a news conference in Jerusalem yesterday
(photo credit: REUTERS)
Advertisement
Visiting Syrian opposition leader Kamal al-Labwani called on Thursday for a small safe zone to be created near Israel’s border in Syria.Asked if he really has enough power on the ground in Syria to create a buffer zone, Labwani told The Jerusalem Post that the goal is “to protect civilians and some military groups could be able to cooperate with me.”He said the zone could be created with the help of Israel, the US, Jordan, Qatar, Turkey and Saudi Arabia.The local population would defend themselves from Islamist groups, the Syrian regime and Hezbollah forces if given the weapons and assistance to do so, he said. Things will “start weak and will become strong if we work in a good way.”Asked about the presence of al-Qaida Nusra Front fighters in the area, he replied that with the help of their allies they could be forced out of the area.Labwani is touring several other countries in the region to promote this ambitious plan, including Qatar, Saudi Arabia and Jordan. He visited the Knesset earlier this week, meeting with Deputy Regional Cooperation Minister Ayoub Kara.He was smuggled out of Syria in 2012 and said he cannot return now, especially now that he has visited Israel. He has received political asylum in Sweden. Labwani was imprisoned in Syria twice for his political activism from 2001 to 2004 and from 2005 to 2011 for meeting with US officials in Washington. He has supported the Syrian uprising and was a member of the Syrian National Council and after its dissolution, the National Coalition for Syrian Revolutionary and Opposition Forces until 2014.Labwani thanked Israel and pleaded for the country to facilitate the establishment of a safe zone, which would help alleviate the refugee crisis by allowing refugees to be temporarily settled within the country.Turkey and Jordan can not afford more refugees so he will try to convince them to create this corridor, he said. “I need my people to stay safe in my land, not in your land,” he added.“For three years Jordan has been cooperating with locals,” he said, adding that some of their weapons have come from Jordan. He did not say whether they were smuggled or were passed from the government in Amman.The opposition figure worries that the forces of Syrian President Bashar Assad, along with Russian air strikes, could push south into the area near Israel’s border on the Golan Heights, creating a humanitarian disaster and perhaps floods of refugees to Israel.With Saudi arms and assistance from Arab countries and Western allies, he thinks that a joint Syrian, Hezbollah and Russian campaign in the south could be averted.There are approximately 200,000 people in the territory where they want to create the border zone. For now, Islamic State is not threatening the area and there are Western-backed Free Syrian Army-affiliated militias in the area.Israel could help by providing humanitarian supplies and helping to create field hospitals within this buffer zone, added Labwani.Moti Kahana, a businessman who sold his company in 2010 and since then has been using his own money to aid the Syrian rebels, is facilitating Labwani’s Israel trip.Kahana told the Post that for now the local forces are holding their ground, estimating that the territory they control stretches 17 km. into Syria from Israel’s border and doesn’t include the Druse village of Hader, on the eastern border of the Golan Heights. Around 20 villages are within this space, he said.Kahana also said opposition leader Isaac Herzog agreed to hand a copy of this buffer zone plan to US Secretary of State John Kerry when they meet.Asked about the establishment of a no-fly zone for this region bordering Israel, he said they are not asking for one now because there is little stomach in the West to enforce one, especially now that Russia is operating in Syrian skies.Nimrod Goren, founder and chairman of foreign policy think tank Mitvim, said that one of the main changes since the conflict began is that now Israel could develop contact with Syrians such as Labwani.“Israeli policy should be to help the Syrian people more. There is so much more Israel can do [humanitarian wise],” he said.Mendi Safadi, an Israeli Druse political activist who has traveled in the region and met with Syrian opposition activist, said this idea of a buffer zone is unrealistic mostly because it does not have American backing. According to talks he has had in Washington, there is no desire for such an operation.Furthermore, he argues that Labwani, “while a known veteran of the Syrian opposition, has no real power on the ground in Syria.”