The prospect of a cease-fire– between embattled Syrian president Bashar al-Assad and the rebels fighting for his ouster– was first declared in Munich on February 12. 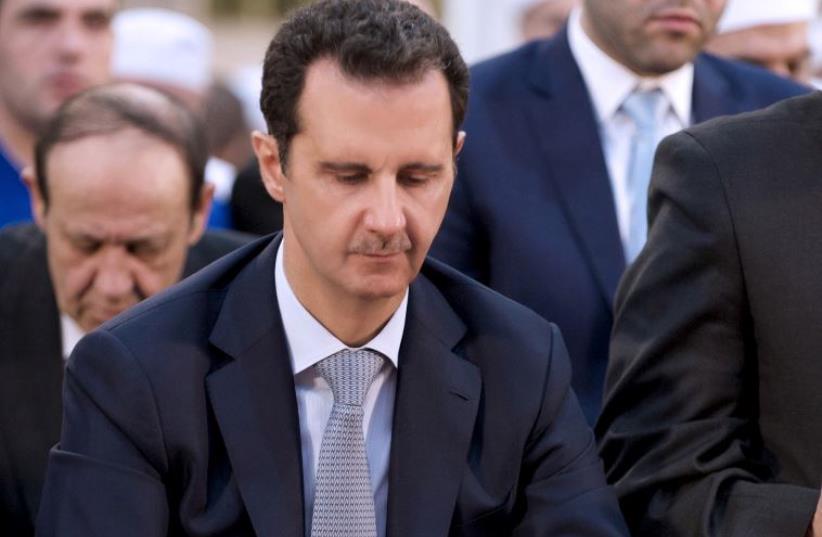 Syria's President Bashar Assad attends prayers on the first day of Eid al-Adha at al-Adel mosque in Damascus
(photo credit: REUTERS)
Advertisement
WASHINGTON – Details of a cease-fire in Syria’s civil war are nearly settled, Secretary of State John Kerry announced on Sunday in Amman, pronouncing that a pause in the fighting could occur within “hours” if all sides put into practice what they have agreed upon in principle.Interchangeably using the terms “cease-fire,” “cessation of hostilities” and “hudna” – an Arabic word for a truce or a quieting of battle – Kerry said he and Russian Foreign Minister Sergei Lavrov have been working around the clock on “modalities” for implementing the agreement.The prospect of a ceasefire between embattled Syrian President Bashar Assad and the rebels fighting for his ouster was first declared in Munich on February 12.Belligerents supporting those two sides of the war will agree on a shared list of terrorist organizations operating in Syria, which they can continue to target, including al-Qaida’s affiliate, Nusra Front, and Islamic State.“The modalities for a cessation of hostilities are now being completed. In fact, we are closer to a cease-fire today than we have been,” Kerry said. “And I take nothing for granted about this.”Russian President Vladimir Putin and US President Barack Obama plan on speaking in the next several days to iron out final details of the agreement, Kerry added. Moscow’s direct intervention in the war last year, with a massive air operation on Assad’s behalf, has dramatically changed the dynamics of the conflict in his favor.“A cessation of hostilities, a hudna, is possible over the course of these next hours,” he continued, speaking alongside Jordanian Foreign Minister Nasser Judeh at a press conference.“I know how much work remains, and I don’t know if everyone is going to meet their commitments. I can’t vouch for that. The United States can’t make certain of that. But what we do know and what we can make certain of is this: peace is better than more war.”In recent days, rebel groups supported by the US have suggested they are willing to adhere to a cease-fire for a period of roughly two or three weeks. The Obama administration seeks a cease-fire that is long enough to engage in a serious negotiation toward a political transition in the country – ideally away from Assad, State Department officials say.Assad also signaled a willingness to enter into a ceasefire this weekend, under the condition that rebel forces do not consider the pause as an opportunity to resupply and reconstitute themselves.“We have said that we are ready to stop military operations, but the issue relates to more important factors,” Assad said to El Pais, a Spanish daily, “such as preventing terrorists from using it to improve their positions.”Despite the alleged progress cited by Kerry, violence continued to rage throughout the country on Sunday, with more than 119 killed in bombing attacks across Damascus and Homs.Russia’s defense minister traveled to Tehran over the weekend, where he met with Iranian President Hassan Rouhani to discuss the developments on Syria. Iran has also invested in maintaining Assad’s rule over Syria, where the Shi’ite leader is fighting for control over a predominantly Sunni country.German Foreign Minister Frank Walter- Steinmeier said on Twitter that they have come closer to an agreement in principle.“But nothing has been won yet. It’s all the more important now to use this newly opened window of opportunity.”