By JPOST.COM STAFF
MARCH 15, 2012 13:08
Police tape off light rail area 370
(photo credit: Marc Israel Sellem)
Jerusalem Mayor Nir Barkat encouraged Jerusalem residents to continue their normal routines while upping their vigilance after an Arab youth stabbed a female soldier on the Jerusalem light rail Thursday morning. "I see the attempt to disrupt life in Jerusalem with the utmost gravity," Barkat stated. "Routine events in Jerusalem will continue as planned and the light rail will continue to operate, serving all residents both Arab and Jewish," the mayor said, after authorities halted northbound service on the light rail for a short period of time immediately following the stabbing. "I urge residents to continue on with their day, and to be alert for any situation," he said, stressing sound security on the light rail, which is a result of cooperation between police, the security forces and railway guards.Still, Transportation Minister Yisrael Katz said he wanted to see increased security on the light rail, after the assailant managed to smuggle a knife on-board despite being checked by rail guards."This is really terrible," city councilor Yael Antebi said after the stabbing attack. "We need to reexamine security on the train. The light rail cannot be the only transportation in such a complicated city." 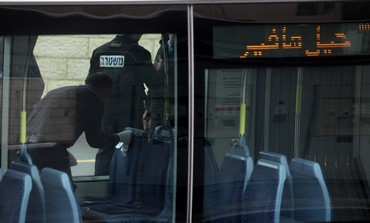 Policeman takes evidence from a chair on the light railLikud MK Danny Danon said a hard-line policy is needed to ensure that attacks such as Thursday's stabbing do not happen again, labeling the attack an "example of Palestinian terror." "It is time to stop Arab terror from raging in the streets of the capital before it is too late," Danon said. "Only an uncompromising resoluteness can prevent such incidents from happening again.""We need to find the terrorist and destroy his house," he said. National Union MK Michael Ben-Ari pointed the finger at Public Security Minister Yithak Aharonovich for not taking a hard enough line to crack down on what he called "nationalist terrorism" in Israel, after an Arab youth stabbed a Jewish girl on the Jerusalem light rail. "Instead of addressing the problem [of nationalist terrorism], he declares that [these crimes are] just hooliganism," Ben-Ari said, noting the recent attack on two off-duty soldiers by a group of Israeli-Arabs in Haifa, a stabbing and robbery in Nahariya, and Thursday's stabbing.