Important as it is, energy does not alone constitute the only field of joint interest. What matters perhaps more is the strategic nature of collaboration between Greece, Israel and also Cyprus. 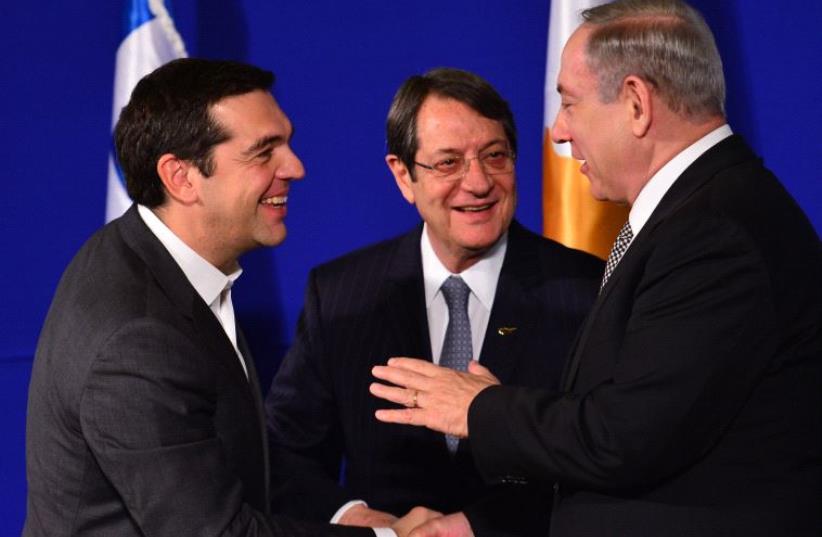 Israeli PM Netanyahu, Greek PM Tsipras and Cyprus President Anastasiades in a trilateral summit
(photo credit: KOBY GIDEON/GPO)
Advertisement
In difficult economic times Greece is endeavoring to shape its foreign policy with relatively low budgets.Although cuts in the defense sector have a negative impact, a careful and smart strategy in parallel with some favorable circumstances can counterbalance losses and possibly yield more positive results. It is here where the Greek-Israeli partnership deserves particular attention.Greece may have lost some of its financial capacity in recent years but has gained a critical ally in the Eastern Mediterranean: Israel. 2016 outlined the excellent level of bilateral and multilateral cooperation and prospects are similarly promising for 2017.At first glance, energy has the lion’s share following hydrocarbon discoveries in the Levant Basin. The recent Jerusalem trilateral summit with the participation of prime ministers Alexis Tsipras and Benjamin Netanyahu as well as Cypriot President Nicos Anastasiades confirmed their determination to examine the possibility of the construction of a gas pipeline linking the three countries. In spite of its technical difficulties and cost, the so-called “EastMed” is supported by the European Commission as a “project of common interest” in diversifying gas imports and will be co-financed by Europe. Further to this, the underwater cable connection of the Israeli, Cypriot and later Greek electricity grids is top on the agenda. The objective is to establish a common electric grid in the future and ensure energy security.Important as it is, energy does not alone constitute the only field of joint interest. What matters perhaps more is the strategic nature of collaboration between Greece, Israel and also Cyprus.It is this language which was used in the January 2016 declaration after the first trilateral summit in Nicosia. Being located in a troubled, unstable and violent neighborhood, common democratic values and principles are the springboard for decisions and policies of mutual benefit.Defense cooperation is a remarkable development. At the time of the aforementioned Jerusalem summit, for instance, the Greek-Israeli “Viper Valley 2016” exercise took place. Similar exercises take place regularly. According to a paper published by Hudson Institute, bilateral cooperation in the zone between Israel and Crete has allowed Israeli pilots to engage in bombing drills and the aerial refueling needed to cover a distance equal to that separating the country from Iran’s Natanz nuclear enrichment facility.Multilateral initiatives are also important.From 2011 onward Greece, Israel and the US have participated in “Noble Dina” naval exercise designed to increase maritime proficiencies among participating nations and enhance security in the Eastern Mediterranean. Additional examples include Israeli “Blue Flag” 2013 and 2015 aerial exercises.The role of Turkey in the Greek-Israeli partnership is certainly evident.The deterioration of Turkish-Israeli relations after December 2008 and mainly after June 2010 has brought Athens and Jerusalem closer. Naturally, a full normalization of ties between Jerusalem and Ankara in the future is considered by some scholars a potential catalyst for a new shift of priorities. However, despite Turkey’s expanded regional presence recently in Syria, it is questionable whether this full normalization can happen under Turkish President Recep Tayyip Erdogan. Israel, the only democratic state in the Middle East, has long suffered broken promises and vague commitments from other non-democratic parties. Even in the energy sector Ankara has several import sources to cover its needs, especially if the Russian- Turkish rapprochement is proven to be sustainable. This variety of choice might give it the upper hand in a potential gas agreement with Jerusalem.Under current circumstances, the winwin cooperation between Greece and Israel is expected to continue. Friendship has been gradually and systematically forged. In November 2016 Athens sent fire-fighting aircraft to help Jerusalem contain large fires. Approximately one year earlier it had defied a European order on labeling settlement goods.Although a small state in Europe, Greece still has a voice in the EU decision-making process, broadening the dimension of its bilateral relationship with Israel.Subsequently, Greece can look toward the future counting on Israel. And it’s not all about energy and politics. Ordinary citizens can benefit. The expertise of Israeli start-ups and particularly in cybersecurity, agricultural production and biotechnology, the relaunch of the “Joint Industrial Research and Development” safeguarding funding for common innovative projects, the possibility of unemployed Greek political engineers and architects finding work in Israel, the arrivals of tourists in both countries and the recent proposal of Shimon Peres to Alexis Tsipras to use the obligatory military service of Greek men to support national research are only indicative ideas encouraging further action at the bilateral level.More importantly, the excellent status of Greek-Israeli relations constitutes a good opportunity for the improvement of Israel’s image in Greece. As long as Athens is successfully transforming its foreign policy dogma, not only the elite but also public opinion starts to learn more about Israel, its history and perspective on international security. While the older Greek generation grew up with a pro-Arab – if not anti-Israeli – mentality, the younger one seeks to escape from stereotypes. People-to-people exchanges and the work of new journalists can accelerate this change in attitude.The author is a lecturer at the Democritus University of Thrace and Visiting Lecturer at the European Institute of Nice.