Trump and Brexit are testimony to the fact that we are living in a world of unexpected change; whether it takes us to the far right or to a whole new way of being, is up to us. 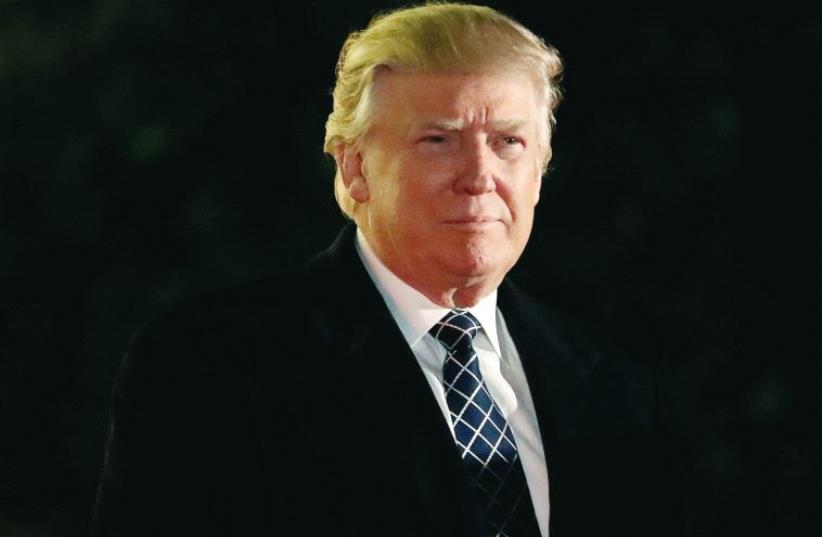 Donald Trump
(photo credit: REUTERS)
Advertisement
Donald Trump's victory, much like Britain's Brexit, marks the desire of citizens of the world's leading Western Liberal democracies to take things back into their own hands. Their cry of anger against a failed system that was leaving them behind may result in what many fear would be a disintegration of Western values and a retreat from the Anglo-American post World War II vision of a free world, but it may also push America and then the rest of the world to take breakthrough steps that will give birth to a positive new future. Over the past decades a great disillusionment with liberal democracies has been taking place. Those democracies that promised to be the protectors of freedom and equality, by ignoring the nature of human egoism, created a reality where very few have most of the wealth while the majority of the public struggles for crumbs. The hopes of climbing the social ladder through hard work have been extinguished. The neoliberalism principle of prosperity "trickling down" from above has proven itself as false. The workers of rural Middle America and its Rust Belt cities, concerned for their families and futures, will have it no longer, so it is no surprise that Trump was elected president and the elites and the old establishment were ordered to go home. Our so called "democracies" have become mirages of freedom, dictatorships in disguise and may now be in a serious risk of world-wide decline.The question is, where do we go now?  Despite the fear of old strains of nationalism rising in the world, is fighting to hold on to neoliberal democracy as we know it wise? The elite, which prospers from the inequalities of the so called "government of the people" with its ghastly uneven distribution of wealth and power, undoubtedly thinks we should. They may even go as far as inciting the masses into violent protests and chaos as we have already began to witness. But that would not treat the problem from the root. If we wish to steer clear of the fascist nightmares of the past, but also not forego the dream of living in societies that truly are free and that truly belong to the people, we must find another way.The Future of WorkAmerica’s ability to find a new and better course and to evade the rebound to the far right, depends upon its ability to address the unattended needs of those citizens suffering unemployment and bleak future outlooks, who felt that they were disregarded by the previous leadership. Therefore, the prime challenge for governments right now is to deal with social upheaval, for an electorate of unsatisfied people who feel they have no way to advance in life and no future for their children is truly dangerous. Without proper treatment of their angst, in their sense of helplessness, they will go to extremes to change things around. Expressing frustration through democratic elections is one thing, but left unsatisfied, these feelings will find their outlet in more dangerous means that could lead to violence and further disintegration of American society. Though Trump has already been working to make good on his promises to Middle America voters and does intend to bring back industry and create more jobs, this will be very difficult for him to do. The industry has long opted for cheaper workers outside the US which will be very expensive to reverse. Creating jobs by rebuilding infrastructure is a temporary solution that will also greatly increase the national debt. Moreover, many experts now understand that we are stepping into a future in which worldwide unemployment will skyrocket as information technology and automation continue to devastate the jobs of blue collar, retail, and wholesale employees. As economist and best-selling author, Jeremy Rifkin, put it: "More output with fewer workers — that’s how factories operate nowadays. That is incontrovertible; it is no longer a debate."

The New Industrial RevolutionTo face the challenge of elevating the large Middle American electorate that has been languishing behind, suffering not only economic problems, but social, cultural and public health issues, Trump must find a new and creative way to create employment and life satisfaction that suit the new world we are entering. Though supercomputers may be making medical diagnoses and even producing sports journalism, they cannot replace real human connection and social interaction which are so necessary in a dangerously fragmented society where loneliness has become the greatest epidemic of our time. Economists already understand that in the new economy, social skills count more than work skills and the "products" that will be of highest demand in tomorrow's world are cooperation and social cohesion. After all, employment is a way for people to create value, and today it must happen in new ways, unrecognized by the failing growth-based market economyIn 1995, Jeremy Rifkin predicted the growth of a third sector: community based service organizations that would create new jobs with government support, redirecting funds to provide "social wage" in lieu of welfare payments. More recently, Stephen Hawking asserted that "with not only jobs but entire industries disappearing, we must help people to retrain for a new world and support them financially while they do so". What Trump needs to do in order to direct America towards greatness once more is heed these relevant voices that see a few steps ahead. Instead of wasting time and money trying to bring back an industry that is long lost to the third world and to machinery, he needs to create employment programs that will train people to become the social leaders of tomorrow's society.Currently unemployed people need to enter organized training programs while receiving scholarships and later be paid to work as the educators and agents of this change towards healthier, more cohesive societies. As part of their training they need to be given broad knowledge of our world today and its trends, especially the process that has been making it an interconnected global village, alongside practical connection tools that will allow them to become small "model societies" that will set an example to the rest of America and the whole world. This will not only cost less, saving a substantial amount of tax-payer’s money that is now being invested in welfare and the huge funds that creating new jobs out of thin air would require, but will begin a social transformation that will have long standing positive impact on every aspect of American life-  healing loneliness, depression, violence, drug and alcohol abuse and strengthening families and communities while providing an occupation of great value and future demand.

Making Use of Ancient Wisdom in Our TimesSuch attempts at teaching individuals to create "model societal relations" have already been proven to succeed in situations where nothing else could, in ongoing discussion circles that have been held in Israel between people of greatly differing backgrounds and beliefs. The method used is based on the authentic wisdom of Kabbalah which has proven itself successful in numerous circumstances in Israel and throughout the world. With this method, known as "Connection Circles", participants experience not only increased social cohesion, trust and harmony but also much greater happiness, fulfillment and freedom from the anxieties that plague our modern lives.This is the kind of work that needs to begin in our global era, and there's no better place to start to innovate and create a better future than with the people who have been most neglected by the previous governments.  Moving ForwardAt this critical point in human evolution in which we become aware that we have exhausted our ideas for making our societies work, as well as our planet's resources, we must begin to treat the root cause of our failures. Until now, despite higher ideals, it has always been man's ego that was driving him to succeed, to conquer, to establish and grow. But now we see that the ego has reached its limits, our times are calling for shared action and complex solutions that go beyond the past patterns of our individualistic mindsets. Our times are calling humanity to step into a new way of working together to heal our world. Only by addressing man's egoistic nature can we take the great ideals of equality, justice and peace that liberal democracies had aimed to achieve, and turn them into reality.  This is the great opening that is now available to America. If America takes these steps into uncharted territory, it will help humanity move forward rather than backwards, into a great social transformation, or as Rifkin put it "a rebirth of the human spirit". This is the true war, the fight for connection; and winning it, will make America a great leading power once more, leading the world to safety and correcting the disharmonies of the past.
Advertisement
Subscribe for our daily newsletter