"Tag" is devoted to bringing Israeli and Jewish expertise to communities in developing nations and disaster-affected areas.

By GILAH KAHN-HOFFMANN
Children311
(photo credit: Eytan Shouker/Tag International Development))
Advertisement
Muslims, Christians, Buddhists and Jews sat together in a Beduin tent in the heart of Amman this week, joking that the tableside nargila was a different kind of peace pipe. They dipped into humous, Middle Eastern salads, rice, chicken and beef, and sampled the paper-thin bread baked on a stone at the entrance to the spacious Rem Al- Buadi restaurant, alongside Jordanian families whose children chased each other around the illuminated fountains.The professionals from Indonesia, Sri Lanka and Israel were in Jordan for the continuation of a two-week workshop that began in Israel, focusing on community development, community resilience and disaster risk reduction.Led by Israeli experts at the Golda Meir Mount Carmel International Training Center in Haifa, the workshop was sponsored by Tag International Development; Mashav, Israel’s Agency for International Development Cooperation; and the Israeli Foreign Ministry. Tag, a British nonprofit, apolitical, international organization, is devoted to bringing Israeli and Jewish expertise to communities in developing nations and disaster-affected areas. 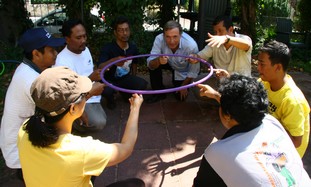 Tag community development workshop
In Amman, the group was hosted by Tag and the Jordan Red Crescent (JRC), which presented sessions on its experience with disaster preparedness and community development.Stressing the importance of people-to- people peacemaking efforts, JRC president Dr. Muhammad al-Hadid pointed out that the JRC has excellent relations with Magen David Adom (MDA). Both organizations are members of the International Federation of the Red Cross. In fact, in 2009, in cooperation with MDA, the JRC sent a group of 15 paramedics to study at Ben-Gurion University for two years, and two members of the group are staying on in Israel for further MDA training at Soroka Hospital before returning to Jordan to apply their training at home.Noting that this was the first (and so far only) group of Jordanians to study at an Israeli university, Hadid said the decision to send the students had drawn criticism and opposition from some of his countrymen. However, he said, “I believe in what I’m doing, so I don’t pay attention. I visit Israel whenever I am invited, which is sometimes every couple of months. I believe in patience and compassion, and also in the difference between ‘loud’ and ‘sane’” – a reference to his detractors.“I remind them that during the days of the Prophet Muhammad, during the wars, the prophet said, ‘Every prisoner you have who can teach 10 Muslims to read and write, set him free,’” he continued. “I am sending paramedics to learn from Israelis. The Israelis are the best paramedics in the world – if it was good enough for Muhammad, it’s good enough for me.If you feel strongly about things, and you do them with your whole heart, things will change.”Hadid repeatedly stressed his commitment to humanitarian connections between all peoples, citing Tag for its efforts around the world.Referring to the cold peace between Israel and Jordan, he said, “There should be no borders between peoples of the world. People of different backgrounds are all human beings… they all want a safer region, a better future for their children. Humanitarian relations are very important. We always judge people before we meet them.Humanitarian relations give us the chance to explore the other person and see them in another way.“King Hussein once said that war is launched by governments, but it is the people who make peace,” he added.“If people are prepared for dialogue, they will realize that there is no difference between us – as we are realizing in Amman today.”