“We wore them on the hot pavement at the Western Wall in Jerusalem, and our feet remained dry while we walked for hours,” says David.

By ISRAEL-CATALOG.COM
AUGUST 11, 2010 16:51
David and Liz each bought a pair of Source sandals from the Israel-Catalog before flying to Israel from the States, and know for sure that they did the right thing.  The multi-layered rubber sandals, reinforced with Velcro strips across the base of the toes and around the ankles, are super-comfortable and multi-purpose, really high-tech footwear. 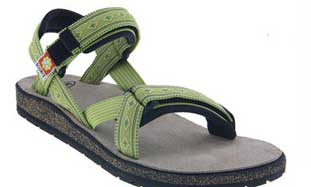 Men“We wore them on the hot pavement at the Western Wall in Jerusalem, and our feet remained dry while we walked for hours,” says David.  “And then we wore the Vagabond sandals on the beach in Tel Aviv, and our feet were totally protected from the burning sand.  And they dry in no time after you wash your feet in the mini-showers on the beach.”
.
David also noted that while eating ice cream on a street near the beach, he came upon a store full of Source sandals, much more expensive than in the Israel-Catalog.  “Guess we did the right thing,” he commented.

Of course, the Source sandals are good for walking anywhere, in western cities and on an African safari...  In fact, try running in them.  No other sandal offers the same support and flexibility.  They have been imitated by other manufacturers, as well, at much higher prices.

Look for Green Dot: The Source sandals come in a good choice of colors and styles for men and women, and are widely purchased by Israelis themselves.  They include a green-dot warranty, meaning they can be returned if there is a problem with them.

Source designers came up with the footwear idea while traveling in Africa, where they saw locals making sandals from car tires.  Let’s say the models they came up with are a bit more sophisticated, more solid with the Velcro reinforcement bands, and ideal for urban, beach and off-the-beaten-track wear. 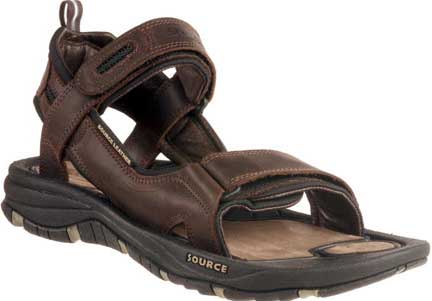 MenDavid and Liz have been to Israel before.   “We wore sneakers and socks last time, and the comfort level was so much greater this time,” he said.    This time, they walked on the beach from the Hilton down to Jaffa and back up on the cement promenade.  “It almost felt like we were wearing nothing on our feet, both in the sand and on cement,” he said.  “It was great.  No more sticky socks and sneakers in the intense heat.”

They also visited the Galilee region up north, seeing Sfat and the Hula Valley panhandle area.  “Everywhere we went, we wore the Israeli sandals,”he said.  “The guys who invented these sandals must have been thinkingof us visitors, though we saw people in office dress wearing themalso.  Construction workers, no, but that’s another story!!”
The designers may have been thinking of Biblical times as well. Whatwas King David wearing on his feet when he composed the Song of Songs? Probably not Source sandals, but something similar.  So there is anhistorical antecedent. And if that is not a source of inspiration whiletrekking through Israel, or in fact anywhere in the world, what is?For orders visit: www.israel-catalog.com.