Ilan Ramon was a fighter pilot in the Israeli Air Force who participated in the bombing of Iraq's unfinished Osiraq nuclear reactor in 1981. In 1997, at the age of 38, he was chosen by the Israeli Air Force and the Israeli Space Agency to be the first Israeli Astronaut. After a long training period with NASA, he flew aboard the STS-107 mission of the Columbia Space Shuttle. 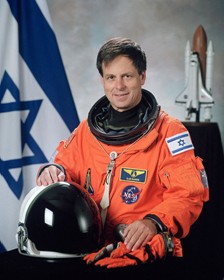 On January 16, 2003 the first Israeli astronaut, Colonel Ilan Ramon (אִילָן רָמוֹן) , began an unforgettable journey into space. His mission carried a symbolic significance for Israel and the Jewish people worldwide, as Ramon himself stated in an interview: “My mother is a Holocaust survivor. She was in Auschwitz. My father fought for the independence of Israel not so long ago. I was born in Israel and I'm kind of the proof for them, and for the whole Israeli people, that whatever we fought for and we've been going through in the last century -- or maybe in the last two thousand years -- is becoming true… it's very exciting for me to be able to fulfill their dream that they wouldn't dare to dream.”Ilan Ramon was a fighter pilot in the Israeli Air Force who participated in the bombing of Iraq's unfinished Osiraq nuclear reactor in 1981. In 1997, at the age of 38, he was chosen by the Israeli Air Force and the Israeli Space Agency to be the first Israeli Astronaut. After a long training period with NASA, he flew aboard the STS-107 mission of the Columbia Space Shuttle.

Ilan Ramon carried to space  a few objects representing the Israeli and Jewish society. To commemorate the memory of his family and the 6 million Jews who perished in Nazi death camps, Ramon carried a copy of a drawing by a 14 year-old Auschwitz victim Petr Ginz that depicts a view of earth from the moon. The picture was drawn by Ginz during his incarceration in the Theresienstadt ghetto. "Moon Landscape" connects the dream of one Jewish boy, who is a symbol of the talent lost in the Holocaust, to the journey of one Jewish astronaut, who is a symbol of our revival. 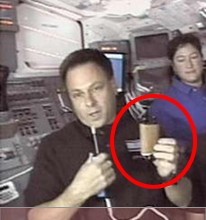 Ramon was also carrying with him a tiny Torah scroll. This Torah was given to a little boy in the Bergen-Belsen concentration camp by the rabbi of Amsterdam, who taught him from it for his Bar Mitzva. That boy, Yehoyahin Yosef, survived the Holocaust, arrived in Israel, fought in the country's wars and became a distinguished professor of planetary physics. This professor oversaw  the Israeli experiment on the Columbia space shuttle on how dust and pollution affect the Earth's climate. In an interview from space with then Prime Minister Ariel Sharon, holding the tiny Torah scroll, Ilan Ramon explained that it symbolizes "more than anything the ability of the Jewish people to survive everything, including horrible periods, and go from the darkest days to days of hope and faith in the future."

From space, Ramon commented about Israel and the world: "I want to say that from here, in space, Israel looks like it appears on the map, small, but beautiful… I think that the people of Israel, and the Jewish people as a whole, are a wonderful people… I think it is very, very important to preserve our historical tradition, and I mean historical and religious traditions." Although Ramon was not an observant Jew, he decided to eat only kosher food while in orbit, as he perceived himself representing in space all kinds of Jews, including religious ones. Ilan Ramon and the STS-107 Columbia crew stayed in space 15 days, 22 hours and 20 minutes, conducting approximately 80 scientific experiments. On February 1st, 2003, 16 minutes before the scheduled landing, during re-entry into Earth's atmosphere, Space Shuttle Columbia was destroyed and its crew perished over East Texas in the Southern United States.The world mourned the astronaut heroes and Israel still mourns Ilan Ramon, who lit up the skies with his bravery, smile and love of Israel, the Jewish people, and the world. 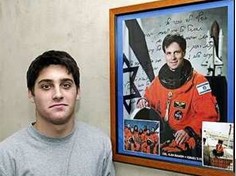 But this is not the end. Ilan Ramon was not only a pilot and an astronaut; he was also a family man, who raised four children with his wife Rona. The nation cried with his wife and children and continued following and hugging the family as they returned back home to Israel. His eldest son, Asaf(אָסָף) , followed in his father's footsteps and became a pilot. He graduated from the Israeli Air Force Flight School with the Sword of Honor as the top cadet in his graduating class. Three months later, on September 13, 2009, at the age of 21 Captain Asaf Ramon perished during a routine training flight, while piloting his F-16A.Today, seven years after the Columbia disaster and the loss of Ilan Ramon, and five month after his son, Asaf, lost his life on duty, we all remember their optimistic view, their modest manners, and the love they spread. We appreciate the ties they weaved between generations, between earth and space, between past, present and future. Let us all fulfill the dreams we wouldn’t dare to dream!הֱיוּ שָׁלוֹם!
Heyu Shalom!
Farewell!שִׁירָה כֹּהֵן-רֶגֶב
by Shira Choen-Regev
The HebrewOnline Team
A Song for Ilan

The NASA program holds a tradition of wake-up calls for the crew. Each day during the mission, flight controllers in the greet the crew with an appropriate musical interlude. On the fourth day of the mission, Rona, Ilan Ramon’s wife sent him the following song. This well-known love song got a whole new meaning after the disaster.