As Americans vote for the next president, a look at the digital state of the race.

By NIV ELIS
NOVEMBER 6, 2012 18:45
USelections2012
(photo credit: Supplied)
Advertisement
The big day has finally arrived, and a palpable tension hangs in the air as engaged citizens, politicians and activists wait to see how the arguments, donations, ads, Tweets, forwards, viral videos and messaging they have pushed for so many months translate into votes. The events of US Election Day will determine who leads the most powerful country in the world, but it will also serve as a lesson as to how big (or small) and impact the Internet has actually had in shaping the election.While national polling shows the candidates in a statistical tie, state-by-state numbers gives US President Barack Obama an edge in the electoral college. But what is the state of the race online? By a variety of measures, Obama has outdone his Republican rival Mitt Romney in the e-campaign. If the US president loses, it could prove that the Internet has not yet come of age as the tool of political persuasion, a possibility already supported by two facts.For one, in a $2 billion campaign, the two sides have spent less than a combined $100 million online. For another, the Internet-using population is younger and leans more left than the general population, meaning that the Internet’s importance may not peak for another generation. According to a Pew Survey, only 36 percent of Americans turn regularly to the Internet for campaign news, a massive leap over the 25% who did in 2008, but still fewer than the number that rely on television. Only 12% turned to Facebook, and only 4% to Twitter to find out what was going on.Twitter offers a political index that analyzes the content of daily Tweets, and rates how positive or negative they are in regards to the candidates. Obama, with 21.8 million followers, goes into election day with a score of 66, 10 points higher than Romney’s 56. Given that Romney only has 1.7 million followers (and didn’t have four years in the White House to amass more), that may not be surprising, though the Republican’s score has at times outpaced the incumbent's. 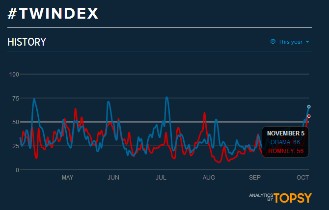 They even created a state-by-state Twitter engagement map evaluating how candidates’ Tweets are received around the country, and getting in on the electoral college tracking so loved by TV networks.As polling opened in the US, the terms #Vote2012, #VoteObama, Ready To Go and #GoVote were trending on the social media site, without a mention of Romney - again, not surprising given the statistics.On Facebook, too, Obama had 32.9 million “Likes” to Romney’s 12 million. On YouTube, Obama’s video views were nine-fold Romney’s. A study by NewsWhip showed (in a handy chart) which Left- and Right-leaning blogs had the most social interactions online, and for the most-part gave The Huffington Post an edge over outlets like FoxNews or Glenn Beck’s The Blaze.All that might not be as bad for Romney as it seems. As it turns out, Twitter may be biased. According to the Pew center, “Twitter users consistently treated Obama somewhat more favorably than Romney; the conversation among bloggers and on Facebook was more divided in tone between the two contenders.” But other social networking tools may be biased as well: The study shows that even in other media, Romney’s negatives tended to be higher than Obama’s, and his positives lower.As “Where do I Vote?” remains the most-searched term on Google, we can begin to say goodbye to the constant news updates, polls, gaffes, Tweets and videos that have dominated discourse since the Republican primary debates began way back in May 2011.The one thing that is preeminently clear is that the Internet’s role in our political and civic life is only growing.Which may not seem so bad after the election ends.Viral Video of the Week:
#USelections2012 offers weekly insight into the US presidential election through a social media lens, tracking candidates as they try to reach 270 electoral votes in 140 characters or less.The writer is a Breaking News editor and blogger at The Jerusalem Post. Read his blog ‘The Bottom Line’ here.
Advertisement
Subscribe for our daily newsletter