Off the Beaten Track: Genesis Land

You don't need a time machine to have lunch with Abraham; Genesis Land takes you back 4,000 years to Judaism's origins.

By JOE YUDIN
JULY 12, 2012 13:23
Desert
(photo credit: Joe Yudin)
Joe Yudin owns Touring Israel, a company that specializes in “Lifestyle” tours of Israel.“So, why did you come to Israel?” I asked the Jewish family of four from Los Angeles. “Well,” said the sixteen year old girl, “I really didn’t want to come here at all. My parents made me come with them. I wanted to go on a teen tour of France and Italy with my friends.”The parents just looked down and blank stares were etched on the faces of the younger siblings of the sixteen year old. I knew that I would have to start from the very beginning and I would have to try and instill a spark in these children that would hopefully ignite a yearning to discover their Jewish selves. After almost four thousand years of continuous Jewish history, it would be a shame for these people to break their personal link in the chain now. After all, it was clear that for the parents, this trip was all about their search for a Jewish connection. So we started from the beginning and I thought it wise to spend our next ten days together slowly going through Jewish history from the beginning until today, taking it slow and having fun, but by telling one long ancient to modern story over several days. But how do we make it fun as well as educational and touching?The best place to start any tour of Israel is with the story of Abraham in the Judean Desert. 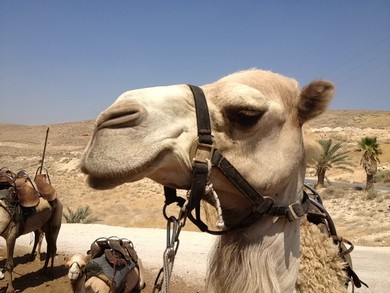 Joe Yudin“We don’t always know why we are coming to see a new place,” I said while driving through the streets of Jerusalem. The Jewish connection with the Land of Israel begins with a verse early on in the Torah in the book of Genesis:"Now the Lord said unto Abram: 'Get thee out of thy country, and from thy kindred, and from thy father's house, unto the land that I will show thee.  And I will make of thee a great nation, and I will bless thee, and make thy name great; and be thou a blessing. And I will bless them that bless thee, and him that curseth thee will I curse; and in thee shall all the families of the earth be blessed.' So Abram went, as the LORD had spoken unto him; and Lot went with him… (Genesis 12:1-4)."I explained that Abraham came to this land, Canaan at the time, and there were people living here in cities and that these Canaanites worshiped many gods and sometimes even sacrificed their children to these gods. “To us, today in the western world it is hard to fathom a parent willingly sacrificing his or her child to their god” I said, “but 3,800 years ago that was the practice and indeed even in many societies today people sacrifice their children for the sake of their god.”
“That’s ridiculous!” said one of the children.“That’s right, it is ridiculous and Abraham our forefather, was the first person to actually challenge this ridiculous notion, perhaps alone or perhaps with God’s help,” I said. “Here in Jerusalem on Mount Moriah, today’s Temple Mount,  Abraham took his son Isaac to the top of the mountain to sacrifice him as per God’s command but at the last minute, God set an angel to stop him from sacrificing Isaac. God is telling us through this Binding of Isaac, that if we follow in His path he will never want us to do such a thing because nothing is more important to Him than life.” For a few minutes we passed through the heart of the city. As we approached the tunnels we passed the Temple Mount not very far away. To the east I pointed out the greenery, the trees, flowers, buildings, the city alive with flourishing life and when we passed through the Mount Scopes tunnels on Route 1 East and came out the other side into the Judean Desert it seemed as if we entered and exited some kind of a black hole. We passed through an army checkpoint and right by the massive concrete part of the security fence that keeps Palestinians without permits from entering Israel proper.“We have just crossed into the West Bank.” I explain this, and I delve into an explanation about the Six Day War, how this land had been annexed by Jordan for almost nineteen years and used as a base to launch terror attacks leading to its conquest and settlement by Israel. The climate changed rapidly here and as we descended into the desert.  The beige, barren hills gave a feeling of wilderness. The desert landscape is cut through by deep wadis that carry the flood waters in the winter from the mountaintops in central Israel down to the Dead Sea and Bedouin encampments dot the countryside by the wadis. Their makeshift shacks and tents topped with water tanks and satellite dishes dot the sides of the road.  Shepherds on their donkeys eye their flocks of sheep, goats and camels as they graze through the sparse underbrush.  We arrived at the settlement of Alon and followed the signs to “Genesis Land”. We were greeted by the owner of the “ranch” Boaz Ido, all decked out in biblical clothes…except for his glasses. Boaz was born and raised in Jerusalem but decided to move to the settlement of Alon in the West Bank to the dessert wilderness because it is the ancient heartland of the Jewish narrative. Alon is a social experiment in Israel as it is a place where secular and religious Jews intentionally set out together to build a new village of mutual respect. “All my life I was living in a religious bubble, until I was drafted into the IDF and it opened my eyes,” says Ido. “We are all one nation and we need to learn to live together. So for the sake of my son I decided to move here. When I walked out onto this beautiful spot and looked down at the Dead Sea and Jordan Valley, I was struck by the story in the bible where Abraham and Lot parted ways. Reading it again from here I realized that it must have happened right here and I decided to create this place in order for people from all over the world to have a small taste of what life was like here in the time of Abraham.” 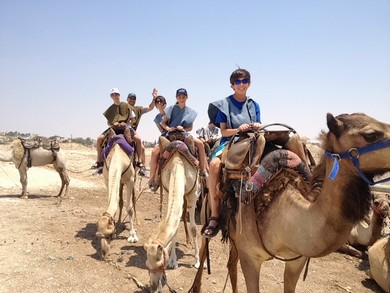 Joe YudinAnd with that, for the next two hours Boaz and his staff took us on a journey back almost four thousand years in time. We all dressed up in biblical garb, called each other by our Hebrew names, reviewed a map of Abraham’s journey while reviewing the story and mounted camels for a short desert trek down to “Abraham’s Tent,” perched on the cliffs overlooking the vast Judean Desert. All together we shouted out Abraham’s name and out he came with a clay jug of water to wash our hands, quite a jovial fellow. He welcomed us into his tent and told us how God revealed himself to him after he smashed all of his father’s idols, but that’s a story for another time. Hospitality is a large component to Judaism and Abraham was quite the host. After a brief snack of dried fruit, herbal tea and hot coffee we went on to make fresh pita bread on the open fire before making our journey back to the van on camel-back. 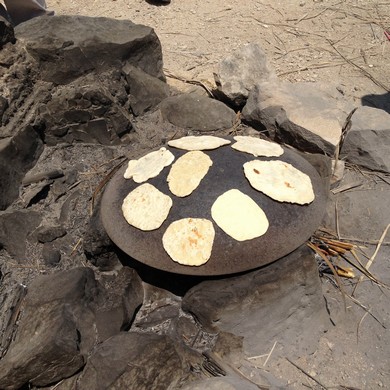 Joe YudinThere are many reasons to travel to Genesis Land.  Lunch in Abraham’s tent or dinner under the stars may be arranged as well as celebrations for Bar/Bat Mitzvah’s and weddings. Check out their website at http://www.genesisland.co.il/.Joe Yudin became a licensed tour guide in 1999. He completed his Master’s degree at the University of Haifa in the Land of Israel Studies and is currently studying toward a PhD.
Follow @JPost_Lifestyle
Subscribe for our daily newsletter