Off the Beaten Track: The walls of Jerusalem

With the Jewish New Year and Sukkot approaching, Jerusalem naturally comes to mind and there is no better time to tour the city.

By JOE YUDIN
SEPTEMBER 8, 2011 15:58
Old City Walls
(photo credit: Courtesy/Joe Yudin)
“Do good in Thy favour unto Zion; build Thou the walls of Jerusalem.” Psalms 51:20With the Jewish New Year and Sukkot approaching, Jerusalem naturally comes to mind. As the weather begins to cool down and the kids go back to school there is no better time to tour Jerusalem for leisurely strolls, wandering through its alleyways, gazing at the walls as the sunlight reflects differently throughout the day off the Jerusalem Stone. RELATED:
Off the Beaten Track: The royal tombs of JerusalemWhen approaching the west side of the Old City for the first time, tourists always gaze up at the site of Jaffa Gate and the walls stretching north and south as if they have never seen anything more ancient. I see the visions dancing in their eyes, as the stories of King David, Jeremiah and Judah the Maccabee  amongst others, wash over them, and I let their ecstasy pass before I burst their bubble. “These walls are not the original walls of Jerusalem” I explain, “those we’ll see when we visit the City of David.”“So how old are these walls?” they always ask.“These walls are new.” I proclaim, “They’re only about 500 years old.”“That’s new?” queries the tourist a little shocked at my description.“Yes absolutely. In the Middle East that’s barely even considered old, let alone ancient.” 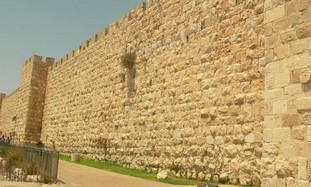 From this perspective not only can we start our guided tour of Israel, but one can begin to comprehend the major gap between the global outlook of the west, and the people of the Middle East who see their respective histories as starting thousands of years earlier. The history of the United States, really only begins in 1620 with the landing at Plymouth Rock, just about 100 years after these walls were starting to be built. We start our tour outside Jaffa Gate. The walls were the project of Suleyman the Magnificent, completed in 1542. As the local legend goes (there are various versions) Suleyman’ s father Selim, the first Sultan of the Ottoman Empire, was upset that the people of Jerusalem were not paying their taxes, so he got his army together and rode to Jerusalem, camping out the night before on Mount Scopes ready to storm the city in retribution at sunrise. Well when the sun arose the next morning Selim didn’t, he had fallen ill and later died. The new Sultan wanted to finish what his father had started. He came to Mt. Scopes at night and went to sleep, dreaming that four lions devoured his father. At sunrise he summoned his chief adviser who interpreted the dream as being the Lions of Judah, would defend the city from attack and that Suleyman shouldn’t attack the city. In the early 1500’s Jerusalem was indeed in ruins, and this backwater town did not even enjoy walls to protect it as it was home to a few thousand paupers, many who had fled the Spanish Inquisition. Instead of conquering Jerusalem, Suleyman decided to rebuild it.Standing in front of Jaffa Gate from the outside look up at the inscription over the arch and another to your left on the wall. The inscriptions date the building of the walls and gates to 1538 as well as naming Abraham as being “a friend of Allah”. It seems to quote the book of Isaiah 41:8, “But thou, Israel, My servant, Jacob whom I have chosen, the seed of Abraham My friend”. 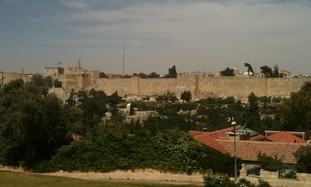 Most guidebooks attribute this to being that the road from Jaffa Gate leads to Hebron where Abraham is buried, but I think that there is more to it than that. Perhaps Suleyman considered this an overture of protection to the Jews of Jerusalem who were a considerable part of the population. Moses Hamon, Suleiman’s court physician and adviser, is known to have persuaded the sultan to enact laws protecting Jews and Christians throughout the empire.Just inside the ‘L’ shaped gate and passed the tourist offices are, according to local legend, the tombs of the architects of the walls, whom Suleyman had executed because they had left King David’s Tomb outside the city walls. Scholars have always doubted this legend but during the recent facelift of the gates and walls of the city, a rare Ottoman 16th century floral design was discovered on one of the rusty metal doors to Damascus Gate, the same floral design as seen on these two tombs, perhaps a hint to the importance of the people buried here, maybe the architects.Between the entrance of Jaffa Gate and the Tombs of the Architects, one can go up the stairs and start a tour of the Old City walls on the walls themselves. This is called the Ramparts Walk and is highly recommended. Bring hats and water. If you want to explore a little further the walls from the outside, cross the street inside the Old City and start to walk along the walls heading south on the outside of the walls. The walls along this section are built over the ruins of the walls from Crusader times, built in turn over the walls from Herodian & Maccabean times.

The wall to your immediate left is Herodian and as you keep walking you will come to a Maccabean wall & tower, followed by a metal grate concealing Israelite tombs from the 8th century BCE, followed by a multi layered tower from many periods as old as the 2nd century BCE. Next you will actually come to a 1 century CE city gate and the excavations of an Israelite house of the 7th century BCE. Finally at the southwest corner of the walls, you will find the base of a Crusader tower torn down by the Mamluke ruler el-Melek, nephew of the great Saladin. He was afraid to leave fortifications of the weakly defended city for the crusaders to capture and use against him. Of course we know that this next crusade never materialized. Joe Yudin became a licensed tour guide in 1999. He completed his Master’s degree at the University of Haifa in the Land of Israel Studies and is currently studying toward a PhD
Subscribe for our daily newsletter